On Friday, Aug. 24th I woke up really early! It was 5:30 when I opened my eyes and peeked at the clock. Too early so I rolled over, then again, then once more and finally at 6:30 I got up. Bill was trying to catch some more sleep, whether he heard me or not, so I quietly tiptoed out and just sat with my Kobo, in the dark and used its attached light. Mine does not have a backlight so this works quite well. It felt a tad chilly so I turned the fireplace on so I was comfy.

Bill got up at 7 ish and we had a coffee and tea together while reading blog posts. He soon had his shower and left to go inside for a morning orientation. He likes to get familiar with the unit he is showing before the customer arrives. Today it is a Flying Cloud Airstream. While he is waiting and, on the clock, he likes to keep busy so he assists a former client with the hook up of their North Trail travel trailer that was in for repair. That’s my guy for ya!

I sat inside and made myself useful. I cleaned up the dishes and then dirtied some more. Shirley had sent me a muffin recipe so I wanted to try them. I should have left well enough alone and stuck to the exact ingredients but when she said they were dense, I added some stewed rhubarb. I added too much and although the mushy goodness takes great, half the amount would have probably worked. They weren’t dense at all, actually wouldn’t even hold together. My fault, not hers. No picture, they didn't even look like muffins. LOL

Bill tasted them and said they tasted good anyway so I’ll try again at another time. There really wasn’t much else I could get involved in so after a few short walks around the lot and a lot of reading, inside and outside with Clemson, I refused to let myself feel any guilt for sitting around. Kate, Kirk’s lovely wife, stopped to say hello and was berating herself for not offering their home for us to spend the time at. Well, I’m happy here in our home but the offer is very sweet.

The plan is to leave today…………….sometime. We are going home tonight, come Hell or high water! The day is racking up to be another hot one but the wind is keeping it at bay. So much so that I can’t feel comfortable with the awnings out. I can imagine what it is like up on The Ridge. Probably a lot cooler. I went inside looking for Nicole, I wanted to thank her for her kindness while we are here. She wasn’t at her desk but I had a brief chat with Katie, Dan, Martin and Ian.


Another walk around the lot window shopping without the intention to buy, I’ve picked out a neat unit that if I were ever on my own and wanted to continue to travel, it would be a nice choice. 😊 I hope that never happens but it is fun to look. The door wasn’t open but I peeked through the windows of the 4 Series isata. 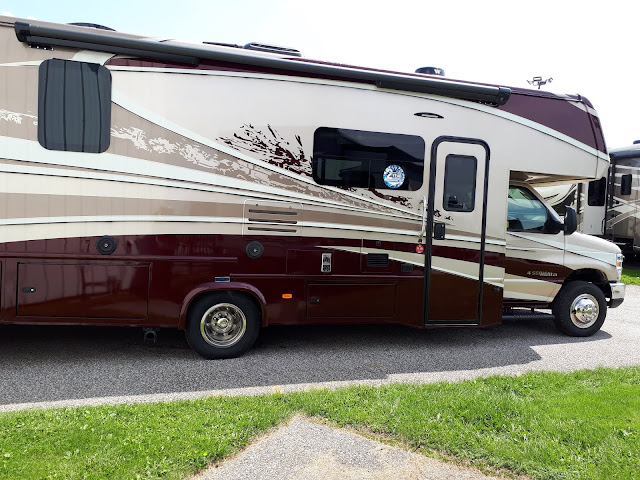 Back at the Suite, I slipped into shorts and decided to remain inside with windows open and the breeze blowing in. It was too hot in the sun facing west to sit out there any longer. More reading as I bide my time until Bill gives me a timeline on closing things up. 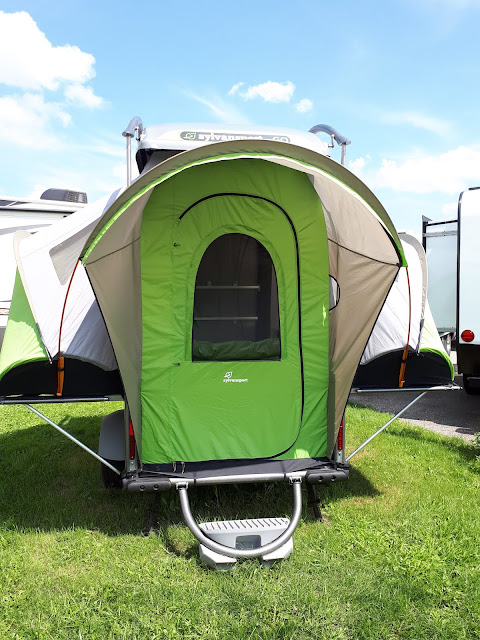 It was 3:00 when I noticed an Airstream being towed out from the compound and upon sitting up in my chair saw Bill driving the new black F150. This meant they were going out for the test drive and I should probably see them in 30 minutes or so. I read for a few more minutes and realized that is one of the issues about reading on a Kobo. You can’t tell when a chapter is going to end so often I have to bookmark the page and stop in the middle. It isn't a big deal but I do like to finish a chapter before putting the book down

Anyway, I soon got up and finished packing things away and locking cupboards. I pulled the bedroom vanity slide in and that was all I could do. Bill would want access to the bedroom to change and use the bathroom before hooking us up. I was ready just on time as at 3:20, they drove in and pulled up out front. Bill was wishing them well and saying goodbye. It was 3:50 when we pulled out of the lot.

It was one of the easiest drives home from London with the Suite, ever. We encountered NO construction, no slowdowns, no weather situations, no disruptions of any kind. That was wonderful and pulling the trailer usually means closer to a 3-hour drive. We were home at 6:30. That is really good time at 105 km on the 401 and 90 km maximum on the other highways. The big deal was that it was before dark and because we have a ‘set’ spot for the tires to be and the specific angle we want and all that jazz, it took us another 30 minutes to be settled.

Clemson danced around us like a little puppet. It was after all 2 hours after his supper time! He is such a good little guy and travelled really well on the way home.

Inside, we just had sandwiches for supper. I had half of a Reuben from last night and Bill made himself his peanut butter and cheese. It was enough; we’d eaten sloppy joe leftovers at noon. Without wasting any time or daylight, Bill drove over to the Acreage to fill the water bladder. We had enough for a couple of days but we are expecting company before lunch tomorrow and have other morning things to do.


I am finding it hard to put my book down but I did long enough to do the dishes up while he was gone. My blog post is the next priority and I hope I can keep my eyes open long enough to get back to Jack Reacher.

This has been a good day. Not much going on but I was happy because I knew we’d be home tonight. I think my little furry friend is too. Bill enjoyed the work and yet admitted that it was nice to be situated back on the Ridge again.

I hope you’ve had a good day. Thank you for stopping in to see that we made it home safely. I always enjoy reading your comments.