Just the Two of Us, Bill Leaves in the Rain, Indoor Purging, PVR Stuff

I heard the alarm go off at 5:15 on Wednesday, Aug. 8th but somehow it just managed to blend in with my dream. I knew the sound was meant for Bill and he responded by getting up and hopping in the shower. I assumed, because I never really heard him. He is very quiet. Next thing I knew, he was coming up the stairs to say goodbye at 6:30. It would just be Clemson and I manning the fort until tomorrow.

The rain started lightly as Bill went out the door and picked up momentum as he drove off. No point in rousting myself up out of bed just yet. It was a morning to go for a walk anyway. Pathetically, that makes me lazy because I tend to not go for as long a walk later on. Old lazy bum, that’s me some days. I made my tea after getting up a couple of minutes before 7 and sat at my laptop. I caught up on what our friends were up to and read comments that I’d missed.

I focused also on checking out the free e-book site that Suzie and Gayle recommended. Now that my Kobo Touch is visible, sitting right beside me, I remembered to register and get a peek at how the site works. Gayle and I chatted for a bit about how it all comes together with books going into Downloads and then I transfer them into Calibre and eventually into my Kobo. I’ve done it from the old book site, Tuebl, many times but it has been a while.

I successfully got one book downloaded and then got error messages on the other 2 I tried. Oh well, another day when my patience isn’t already stretched to the max. I thought I only had about 130 books on my Kobo but there are 225 so I’m good for a while. I’ll just keep on top of it so I can take advantage of this new site. Thanks sis! After doing that for a while, I felt like I should eat something but without any eggs in the Suite, I was seriously befuddled on what to have.

I had a bit of my 9% Liberte yogourt and a half an apple. Nothing else appealed to me. When the rain stopped around 9:30 or so I debated going for a walk and soon after thinking that, I could hear more spatterings on the awnings. The nice thing is that the winds are almost non-existent so it has been a steady gentle rainfall, straight down into the thirsty terra firma.

Around 10:45 I saw the UPS truck slow down and stop at the end of the lane. Well, I saw him coming up to our lane entrance and then I saw him drive down the road past our place. There is too much greenery blocking my view from up here on the hilltop. I knew that meant the Avon order for Gayle and myself was dropped in the mailbox. Bill called to check in and fill me in on his confusing mixed up day. LOL For one reason or another, customer time slots get shifted around helter-skelter on the job site and that affects a host of staffers. Bill included. He bides his time, on the clock because his presence was required, and does his job when he can.

I decided to chance the sky and walk down the lane to retrieve my package and the weekly flyers were also there. Since I finished my book last night, finally, I could read the junk mail and peruse the Avon books before starting another. This wasn’t a book I’d recommend for Bill to read. It was good enough that I had to finish but something about it didn’t have me anxious to keep at it. I’ve initialed it and will drop it off at the book box in town.

At 12:30 I once more tried to decide what to eat. A salad did not appeal to me, even though I was trying to be good and got all the ingredients out. I felt like I would be forcing myself to eat it so put everything away and opted for soup. It was cream of celery which I used to love but this sure isn’t something I’d buy again. It is Compliments brand and pretty UN-tasty. The leftover bowl will go on my chicken thigh for tonight’s supper and I’ll have a salad then too.

I did the few dishes up and went upstairs to my closet. Yup, time for more purging. Since I brought things home from our Sister’s Fest, I’ve added a few more things. Each time I open the closet door, I see something that I haven’t worn for a while. Why is it still there? If it isn’t a favourite item or if it isn’t one of those special items that you can only wear for certain occasions, I shouldn’t have it. With a September clothing exchange coming up, now is the time.

Clemson joined me upstairs, naturally but he wasn’t much help. As you can see, he slept through it all. When I told my girlfriend, Brenda, that I was purging ‘again’, she replied ‘Purging? Will I have anything left?’ Too funny, but what she doesn’t see is what I bring in. Anyway, I made progress and finally talked myself into getting rid of some of my older dresses, even though I still like them a lot, in lieu of the newer ones that I have to replace them.

It was around 3:30 when I carted two piles of neatly folded clothes out to the bunky to add to the other bag. The nice thing is that these have never seen a clothing exchange before so I have really impressed myself. I went outside for a walk down the lane and Clemson didn’t budge. It feels humid again and the temperature is still hovering around 75F/24C. There was mail, well, mostly junk mail except for the Canadian Tire flyer which we like to look at.

After I came back, I stopped and cleaned up what I could gather easily of the fresh sawdust that was in a pile at the new shed site. I filled our Restroom bucket a couple of times easily and then went back down to pick up the wood that was strewn all around. I know Bill wanted to do that but ran out of time. I don’t know which pieces are re-usable for anything so just tossed them all together and brought the small chunky ‘fire starter’ stuff up to the pit.


I sat in the King chairs for a bit and chatted on text with Donna and Pat and then came inside with Clemson. Yup, still snoozing. He came down once at 4:30 and I figured he was going to nudge me for his supper. Nope, he walked around and went right back up on the bed. Such a goofball but we love him! I caught up on my post and grabbed a handful of nuts to munch on. The sky has been crazy today, with heavy dark clouds one minute making me think rain is coming and then sun and blue pops through them.

I turned the tv on so I could watch either NCIS reruns or start my recorded Bachlorette. Being in charge of the remotes is foreign to me but I honestly don’t mind. With 2 tv’s we all have options! I decided on putting the PVR to work and watched 2 ½ hours of my program. Somewhere between 5:30 and 6 pm, Clemson came down from the bedroom for his supper. That’s unusual! He must have been having good dreams.
Then, somewhere between 6:30 and 7, I heated up the chicken thigh in cream of celery soup for my own meal. There was enough cabbage salad just for one and I cut up one of my tomatoes and a chunk of Carol’s cucumber and dished up some olives. Voila! Supper is served. The fridge is looking pretty empty these days, I’m not sure how that happened. I might have to go shopping for some fresh veggies to fill the crispers. 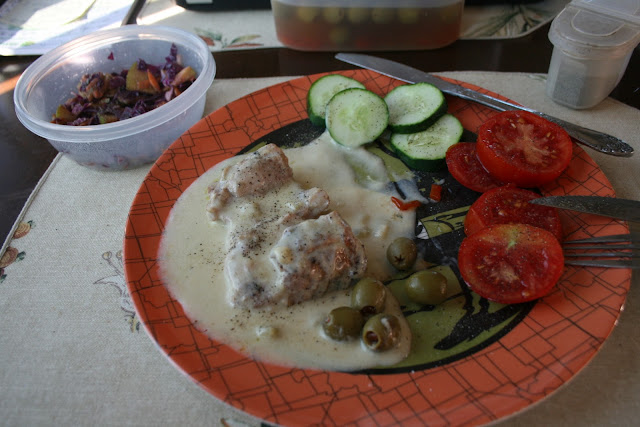 Supper was good and I cleaned up the dishes soon after. I had a movie called Eat Pray Love on the PVR as well so decided to watch it. I like Julia Roberts so settled in to enjoy it. The sunset was pretty tonight and kind of perfect since the movie was about a trip to Italy. The sun dropped below the horizon as the actors drank their red wine and ate their Rome pizzas. Good grief! 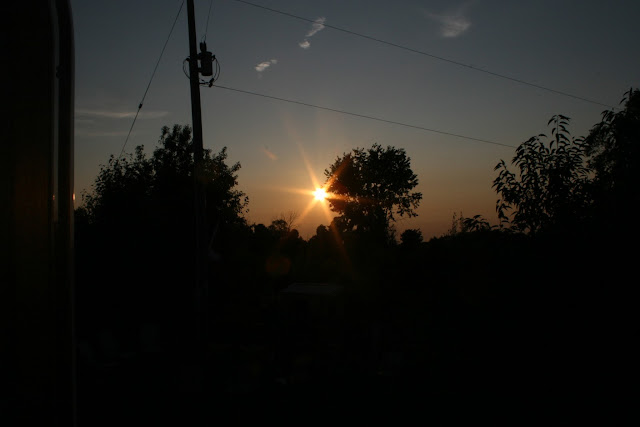 This has been mostly a lazy day for me but I’ve enjoyed another peaceful, quiet one to myself. I hope you have had a good one too.

Thank you for popping in to see what my day was all about. I do enjoy hearing from you, if you so choose.

Posted by Patsy Irene (Chillin' with Patsy) at 7:31 PM