And It’s a Take-Off! Hot Day at the Field, Home Turf and Home

It was 7:30 when Bill and I crawled out of bed on Sunday, Aug. 12th. That was a much better night sleeping for all of us. Clemson moved from Bill’s side to mine once through the night and didn’t seem to experience the disorientation of the previous night. The actual Fun Fly was only one day so today meant the field was available for free flying to those of us left.

Bill was dressed and out the door within minutes of getting up and I sat at my laptop hoping to get my ‘belated’ post done. Our neighbours, Bob and his wife, Ruth (who he brought back Saturday night) were still inside so when I got the message that my battery was dying, there was no way we were turning the genny on. This is still our old, reliable but noisy, one since the new one is still at the repair shop back home.

It was nice that the tv in this trailer is on a swivel between the living area and the bedroom area. Nice feature indeed but for me, it meant I could sit at the table and watch for when Clemson began moving. The bed is at least 18” high. So, the decision was made for me anyway since I couldn’t work on my laptop. I made a pot of coffee and watched for him to wake up.

Once he did, he appeared hungry, no doubt! and ate a couple of pieces of his soft food. That was my opportunity to slip his half pill into the food and he ate it. We moved outside and sat in the sun for a little while. The fridge in this Mallard is finally starting to cool down appropriately so I went to move the stuff Bill had placed in the freezer yesterday down to the fridge section.

Woops! He had put a Coke up there and it had burst. What a mess! The cream was half frozen and so were the remaining eggs in the carton. My goodness! I don’t think we were thinking straight on that plan. I poured Bill a coffee and started his breakfast. Have you ever cooked frozen eggs? Cross that off my bucket list. Ha ha!
The shells were cracked and when I peeled them away, the egg rolled into the fry pan like a child’s toy. They cooked up fine when I cut them up and made Bill a sandwich.

He is pretty easy to please with most meals and when he is this involved in other things, even more so. I had to toast the bread on the burner but he didn’t mind the blackness at all. At least he didn’t say so. 😊


Instead of doing the same for me, I waited a bit later and had a grilled cheese sandwich with the crusts of the loaf. It cooked up nicely in the fry pan. I can’t believe I am drinking coffee and enjoying it. Mind you, I am adding sweetener so it is like a ‘special’ coffee to me. The big thing on the agenda today is to get Bill’s big Stinson in the air for its maiden flight. Come hell or high water, it is going in the air! Yesterday, they managed to get it running at a steady rate. 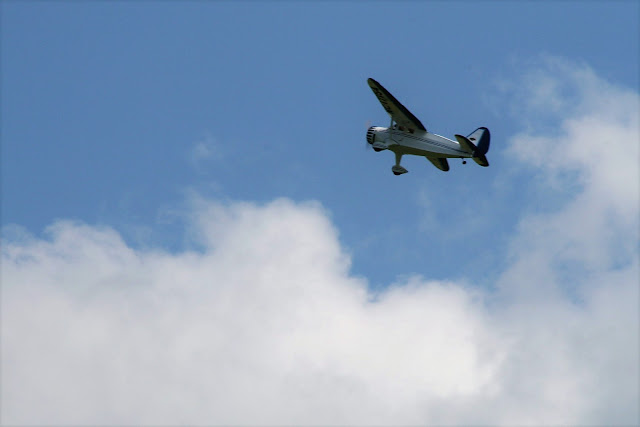 Bob and Bill worked steadily on it this morning and soon it was time. I was inside sorting pictures when I heard the motor. That was my cue to run with the camera. The flight was successful and there were smiles all around from the few friend’s aka spectators but none as big as Bill’s. This was his goal this weekend and he met it. It didn’t matter that he didn’t fly it, Bob was able to get the feel for what trimming it needed. It went up a few more times, successfully, before it was time to start packing up. 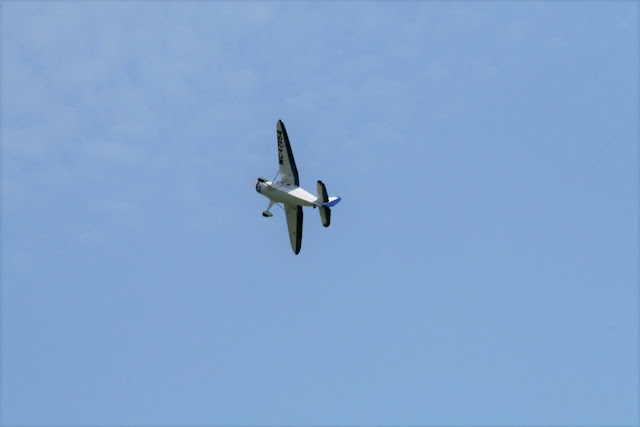 Walt left, Tom said goodbye and then Keith and Oreo pulled out. Packing up was not a chore I looked forward to but I set to stripping the bed. The ants in this trailer were enough to drive me nuts! In the kitchen cupboard over the counter and in the bedroom closet. I’d put my purse in there on Friday night and when I pulled it out this morning, at least 25 came crawling out. Nothing was in my purse to attract them other than maybe a dark place to hide.

I swatted and killed as many as I could before they scrambled across the mattress so I apologize to Nicole for the dirty floor. I forgot my broom or I would certainly have swept the trailer out before we dropped it off. Of course, things never go back into the same bags as they came out of but I did my best. The last thing I did after emptying the fridge was turn it off and pour some warm water into the freezer so I could thaw the frozen mess from the Coke.


With that cleaned out, Bill loaded the truck and we were on our way to CanAm. All we had to do was drop the Mallard out front and make sure it was locked up. Back at the field, Bill hooked up the cargo trailer and say goodbye to Bob and Ruth. The drive home should have been uneventful but we were so busy chatting, I guess, that we completely missed Exit 222 which takes us home through Embro. Driving through Woodstock was a pain in the butt with the construction and a delay of another 30 minutes.

We arrived home by 5 and unloaded the truck. Clemson needed to re-acquaint himself with ‘Home’ again, in his new state, and we closed the bedroom door so as not to entice him. We both kept a watchful eye on his attempts to jump on the couch and chairs and put his bed on the floor hoping that would be enough. It worked for a while Sunday night. Bill went out to cut grass, yes, hard to keep a good man down, and Clemson and I just relaxed.

By 9:30, with my post finished, I was done for the night. Still trying to catch up on Friday night’s sleep, I guess. Bill and Clemson followed later, but I was asleep so didn’t hear them. I was glad to be home, at least glad to be in our own home again. It was a fun weekend though for sure.

On Monday, Aug. 13th we woke up around 7 again. Bill and I. I know I slept well because Clemson was cuddled with Daddy all night long. I had room to move, turn over and stretch but I don’t know how Bill slept. He was up and out the door after I sorted the laundry. First on the agenda was to get the water bladder filled. We were down to 13 gallons and Bill was leaving tomorrow for work.

Clemson slept until 8 and after taking him out, I sat with him while Bill was gone. Then it was my turn to head into town to do the laundry. Bill sat inside with Clemmy. We wanted to monitor how he is with the furniture. Will he try to jump up on the couch etc. if he’s left alone? And can he do it safely?  We were both really pleased to see his eyes had stopped their rapid side to side motion and he was less wobbly on the legs but noticed that he still had the head tilt. It is endearing, I must admit, as if he is constantly asking a question.

When I finished at the laundromat, I drove to Foodland to pick up bread and some veggies before returning to the Ridge. We had bacon and eggs for breakfast and then I hopped into the shower. We had a bank appointment in Markdale; one of Mom’s investments were coming due. This day is just flying by and I haven’t really had a chance to tidy up the Suite. The floor needs a good cleaning. I brought more than half of the clothes in off the line before we left at 1:30. They dried really fast!
Back at home, Clemson and I settled in my recliner. Bill was outside working on one thing or another. I was really feeling the heat again today and I’m sure I dozed off while trying to read my book. It is an Anne Penny story called Bluegate Fields and I’m enjoying it. It is strange though because it was written about times in the 1880’s. It is a mystery so I’m hooked. I’m enjoying the Kobo too but need to make an adjustment on the book cover that it sits in. A little bit of Velcro should do the trick.

For supper, Bill grilled a couple of burgers with the works and I made up a Caesar salad. He also barbecued a couple of small pork loin chops for his supper tomorrow. I cooked some corn for him to eat with them. As we were doing up dishes, there was a knock at the door and we had welcome visitors.

Rob and Pat decided to drive out and see how we and mainly Clemson were doing. I love that they feel comfortable enough to just drop in. That is what good friends do.

They stayed for a nice visit and then headed off home around 8. I brought the rest of the clothes in off the line and Bill made up his lunch sandwiches and packed his bag. Clemson settled on the couch while I write this post and we watch Mash reruns. This has been a fine day. The temperature rose to 84F today and just before supper, I caved and turned the a/c on. It is going to be hotter tomorrow and Wednesday so I’m going to leave it on.

I hope you’ve had a great day! Thank you for stopping by. Your comments are always appreciated, I enjoy reading them.

Posted by Patsy Irene (Chillin' with Patsy) at 8:23 PM