Friends’ Departure, Swim at the Acreage, Roofing, Celebration, Alone Together

It was just minutes before 7 on Sunday, Aug. 5th when I woke up and realized that I was alone in bed. The door to downstairs was closed which means that Bill has been up for a while. He would be anxious to get working on his shed. I joined him downstairs and he had indeed eaten, washed, shaved and was ready to get to work. Before my tea, I decided to head out for a walk and got a mile and a half in.

By that time, Bill was down in the gully working away. There wasn’t a lot he could do on his own but he worked for a couple of hours. It was a nice walk and when I returned I sat outside on the shaded patio with tea, laptop and camera. I didn’t send my blog post off last night, as you’ve noticed so that was what I had to get at this morning. My own deadline, no one else’s. Rob and Pat drove home with the GMC in their preparation to pull the Cedar Creek out.

I finished that and waited with Bill while he texted Gerry to see if they were working today. It turned out to be a no for one reason or another so Bill hopped on the mower and cut the back field, the corral and the corral hill (for me). Yay, thank you, dear! Inside I prepared the basic ingredients for a Cabbage Salad for tomorrow and then I noticed Rob had returned to pick up the fiver. All of our friends are leaving and as Rob says “all good things come to an end, such is life”.

The rest of the day was pretty lackadaisical. I read a fair bit of my Evidence book until after lunch and Bill made a couple of trips into town. One? Two? I can’t remember but he did report after going to town for fuel for his airplanes and riding mower that the Esso station ran out of regular gas. He couldn’t get a full can. That’s not good on a long weekend!

It was around 2:30 when Bill suggested we drive over to the Acreage for a swim. Sounded like a great idea to me so we changed into our swim suits and I retrieved my water shoes and all 3 of us left. Suzie was sitting out reading by their coach so we told her where we were headed. It felt cool but that was only because the air was so hot. It was so refreshing as I floated around on the pool noodle and Bill swam around. Show off!
Clemson does not like the water, I’m sure I’ve told you that, but his tongue was hanging out with the heat. He’d taken a drink of water as soon as I put his dish out but Bill picked him up and took him out into the shallow water. It wasn’t deep enough for him to swim back but his little feet were already in motion by the time Bill set him down. This short video clip shows him trying his darnedest to get as far from the water as possible. What a character! I’m sure he’ll never admit how great it felt though.

We sat for a while and Joanne and Ted, the last of their weekend visitors, left about 30 minutes before we did the same. It was after 4 when we got home and Bill had one destination in mind. The recliner for a snooze. I left them inside and took an ice-cold water outside with my book. The hammock, with no one in it, does loop-de-loops over and over in the wind so I solved that issue by laying down on it. I love my hammock. It was a birthday gift the year we bought our house in 2002.

Wondering and hoping that Mike and Gerry might come later when it cools down to work on the shed, we lit the Weber around 5 and grilled burgers. Seems we eat these a lot but they are good, filling and fast. With a cob of fresh corn on the side, it went down great. Dishes were done by 6 when we got a text from Donna stating the very same plan. They were going to have supper and come over to work for a bit. We would host the campfire tonight too.

I sat outside in the shade finishing this post. Bill is down at the shed doing some sawing and some nailing in anticipation of their arrival. 😊  There were a few small things that he figured out he could do on his own.

Soon the boys arrived and things were happening. Donna and I sat up on the hill in our gravity chairs and watched from the shade of the trees and when the sun went down, we moved to the firepit and I started a campfire.


Everyone was pooped, they had had a late night on Saturday and Bill and the guys had been working. I don’t know what my excuse was, actually I felt pretty good and, like Mike, could have stayed up longer. Donna and Gerry were yawning so the 3 of them left around 10, I think, after we had a couple of meteor shower viewings.


It was a lovely night so we left our windows open plus the outside door again. George and Suzie remained inside their coach and didn’t partake in the campfire on their last night. I think the heat got to them too.

I went straight to bed and didn’t bother downloading pictures at all, so that explains the 2-day posting. Bill hopped in the shower before hopping into bed. They are making great progress on the shed, roof and all!

On Monday, the Civic Holiday, Aug. 6th Bill and I both got up around 7. The sky was mostly clear again and there was a lovely breeze. I had gathered G & S’s garbage last night with ours and while I went for a walk, Bill took it down to the road on his way to the Acreage for water. Our tanks were almost whining, they were so low.
Even though it was an early walk for about a mile and a half, I was beaded with sweat on my brow by the time I returned. Whoever said you can ‘sweat’ weight off is full of you know what. Ha ha. When I returned, I loaded the dirty laundry into the Rav and said goodbye to George and Suzie. It was around 7:45 when I drove into Durham and I knew they’d be gone before I returned. I wasn’t even sure if the laundromat would be open on the holiday so was pleased that it was.


Three loads into the wash and I was on my way back to the Ridge. Mike had arrived and he was hard at it with Bill, finishing the roof before the heat hit too badly. I had word that Gerry would be joining them too so told them that and then came inside to make them coffee and omelette sandwiches. Donna gathered up some sawdust shavings while here dropping Gerry off and I sent her off with some of my tomatoes.

When she left, I got my clothes up on the line I then hopped in the shower. I chose what I was going to wear this afternoon to the birthday celebration and then brought the clothes in. They were dry within 2 hours but now I was hot and sweaty all over again. LOL  I made up the recipe for the dressing for my cabbage/apple salad and although I’ve had to substitute things, it tastes okay. I hope.

The guys finished work around 12 noon and relaxed with a beer before heading back to the Acreage. The wind is crazy up here today but that is a good thing. I packed our bathing suits and towels and Bill had a shower before stretching out in the recliner for a quick doze. Clemson must be getting a breeze up on the bed because he has been up there since Bill come in, stretching out himself across the bedspread. 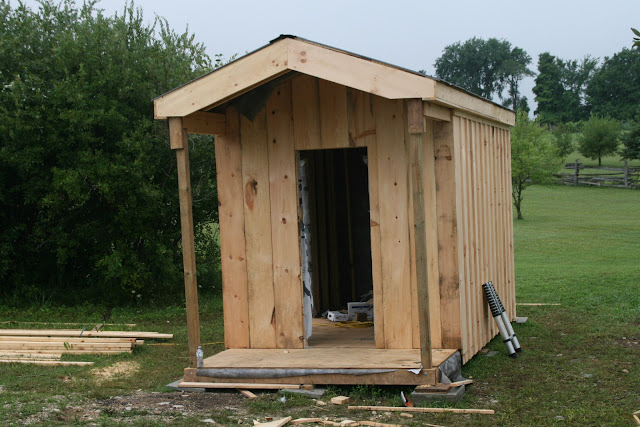 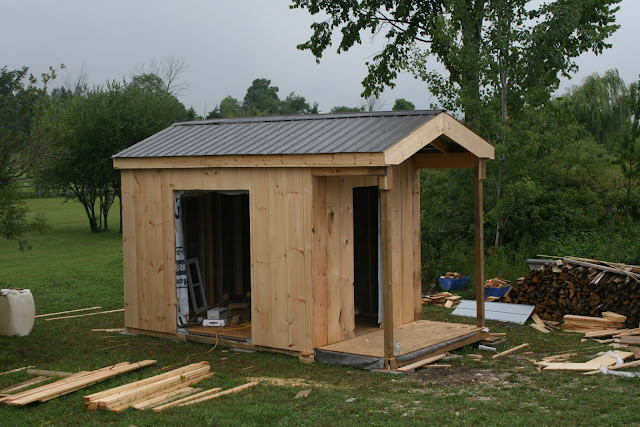 His bag was packed too, he is spending the afternoon and part evening with his buddies, Rob and Pat. They are such a blessing and I hope we tell them often enough just how much we appreciate them. Clemson will be much happier ‘home’ than at the party today and so will Bill and I. At 1:30, I slipped upstairs and into my cool summer dress that I purchased at Keady. I think it is the best choice for today. We drove to Durham around 2 and with hit and miss holiday weekend traffic arrived at Carol’s around 3:30.
They had been hit by a bad storm just 30 minutes prior to our arrival and their power was out all around the area. That explains the trees down on the main streets of Sebringville. Brian has his or Todd’s Champion generator running which helped with some of the lights and the fridge in their big house. Everyone was out in the backyard around the pool. Unfortunately, they lost a gazebo in the storm so shade was minimal except close to the house.

It was nice to see everyone and I mean everyone with only one exception. Krystal was disappointed that she couldn’t be there but was having a great time, I’m sure, camping up north with her girlfriends. Plans were already in place when this party was confirmed. We sat for a while before the no-brainer decision to get into the pool came to fruition. It felt cool after being in the hot air but very refreshing.

I was in for about 20 minutes and got out while Bill remained and played with his granddaughters, Chelsea and Olivia for quite a while. It was fun to see them challenging him with hand stands and somersaults while he, in return, showed them how to swim along the very floor of the pool.

We all had lots of food to eat with cheeseburgers, hot dogs and chicken burgers plus various macaroni salads, Caesar salads and my cabbage salad to choose from. It was a great supper.

There were dessert squares, brownies and a special cake to fill up on if there were any gaps left in our tummies.

A wonderful day all in all and it was around 7:30 when we joined in the staggering departures. It was an eventless drive home which is good. I felt exhausted for some reason and although I couldn’t sleep, closed my eyes off and off briefly on the way. We pulled up in front of Rob and Pat’s around 8:45 to pick up our little pooch. It was such a relaxing day knowing he was in good hands with his buddies.


At home, we unloaded the 2 coolers and left the rest of the stuff for morning. Inside, we decided to just go to bed and turn the tv on. I read a chapter before giving in and watching a few minutes of the movie he had on. When I closed my eyes and put my ear plugs in, I guess it rained steadily for about an hour. A nice gentle rain, Bill said so that was good timing for us.

I hope your days have been at least half as good as ours have been. We’ve had a wonderful time up here with our friends and now we can get back into our quiet time together today. 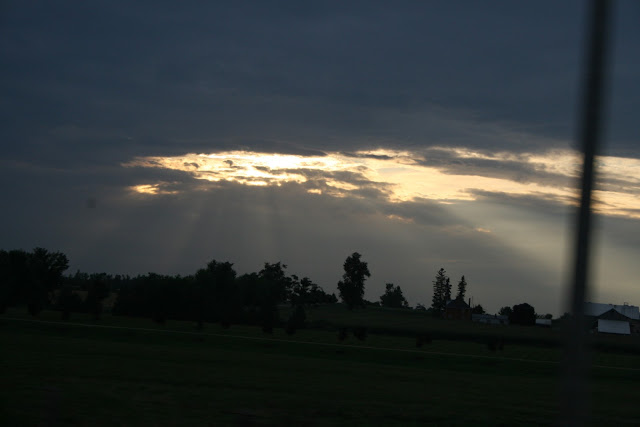 Thank you for reading along. Sorry for the long post. Your comments are always welcome!

Posted by Patsy Irene (Chillin' with Patsy) at 7:01 AM