Last night when we got home from Chatsworth, it was still 71F/22C and it felt humid in the Suite. We closed the windows and turned the a/c on knowing it wasn’t going to cool down overnight. I woke up at 6:30 on Tuesday, Aug. 28th.and realized that worked well, as I slept like a log. I’d only had a margarita and a small glass of Chardonnay last night so I won’t credit the drink.
Bill was sleeping soundly with Clemson snugged up against him so I crept out of bed just before 7 and turned the Keurig on and slipped out for my walk. The warm air hit me instantly but there was a lovely breeze so I left my lightweight jacket on just in case it rained. The sky was overcast with threatening clouds again. Nope, not stopping this gal, I’m going! I haven’t been my ‘vain’ self lately and have neglected the selfies, so stopped for a couple along my walk.

When I got back, my hoodie was off and I was quite humid. This was a slow-paced stroll and I was still feeling the heat. Bill was up and we made our drinks while sitting reading a bit on line. After finishing my tea, I got my running shoes on and my hat and gloves. Time to cut this lawn! I retrieved the battery from the bunky and put it in the mower. As I began pushing it, I could tell from the whir-whir sound it was making that the battery was dead. Crap!

It had been plugged in for the required 24 hours after I used it last but Bill wonders now if the power tripped at the panel during that time and it really didn’t get charged. There is no indicator, like on a camera battery, that changes colour when it is fully charged so you never know. Anyway, stuff like this really ticks me off (fortunately, not for too long). I was all geared up to do something and then couldn’t because of ‘mechanical’ failure, so to speak.

Anyway, I admitted defeat, plugged it in, and after grumbling a bit, I calmed down and decided that things happen for a reason. The grass isn’t terribly long, I just wanted to have the whole place cut within the same time period. Now it will be Thursday by the looks of tomorrow’s weather. Oh well, I wonder what else I can get into. Bill cleaned up, packed his lunches and his cooler and was out the lane by 9:15.

I took the quiet time to read some more about Jack Reacher and all of a sudden, the Kobo stopped. It didn’t black out, just stopped. I couldn’t turn a page or anything. What the heck is going on? Well, it was time for a another cuppa anyway, so I got up and made myself a coffee. Funny how I enjoy a coffee now. When I cut out sugar, years ago, I just drank it with cream and it got to the point that it was habit. I wasn’t drinking it because I liked it. So, I stopped and just drank tea. The difference is that I’ve started with Bill taking it with Splenda sweetener and creamer and I am actually enjoying one a day.

When I sat down at my laptop, with Clemson sound asleep in my chair, I shut the Kobo down and waited a while. Starting it back up was all it needed. It must have frozen for some odd reason. Phew! When I finished my tea, I let ‘sleeping dogs lie’ and slipped outside and sat in my lounge chair and read until I finished Evidence. It was another page turner for sure.

While I was outside, I decided to drive into Durham and take advantage of this hot day. I haven’t been to the Dam yet this summer and I’m past due for a swim! I took my lounge chair and a pool noodle plus a bag with my towel, sunscreen, camera and my water. When I arrived, there were only a couple of vehicles in the parking lot at the top of the hill. So far, it looked pretty good. Because it is quite a jaunt down the hill to the beach, I thought I’d first walk over to a picnic table and see how many were swimming.

That changed the picture for me as well as my afternoon plan for a swim. There were 3 parents and about 10 children between the ages of 3 and 13. I love children, well, my own children and grandchildren specifically but when it comes to spending some quiet time at a beach with a book, listening to them trying to outdo and out-speak each other, isn’t my cup of tea.

Here in Canada, our school students start back the day after Labour Day. That is just around the corner and I wouldn’t begrudge them from getting the best out of their last 2 weeks of summer holidays. It’s another reason I enjoy so much being in a park in the southwest during the winter months. I can swim anytime with other adults. I sat at a picnic table up on the hill to the north of the beach and enjoyed the lovely breeze in the shade.

I chatted on Messenger with a reader, Elva, about grilling potatoes on the Weber and then Donna about the step they were replacing at their house. Bill called as well and we chatted about our afternoon. He’s had another mixed-up day and made the drive to London unnecessarily today. I know he probably won’t mind but it does take him away from things he’d like to do around home. When things change at CanAm there isn’t always time to inform Bill and prevent him from making the trip. At least he has a full day with 3 customers tomorrow. 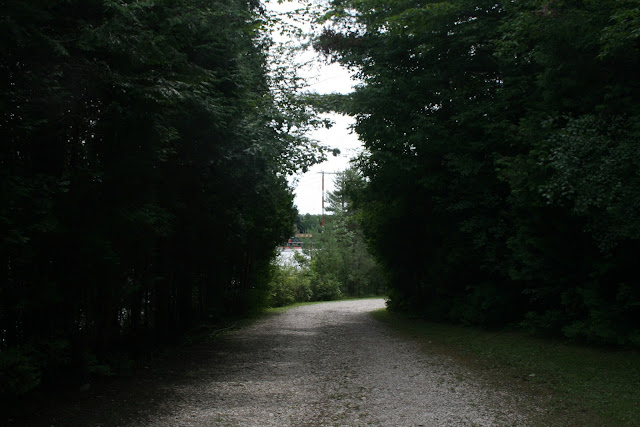 I took a walk back through the park just to see where it went as I noticed many people, young people in particular, walking from that way. I was carrying my heavy bag so didn’t go too far and wouldn’t in that heat anyway. I walked back to Black Beauty and there were a lot more vehicles by this time and a lot more ‘bathers’. By 3:30 I was driving back home and soon back in my recliner with Clemson.

Clemson was looking for his food from 4:00 on but I managed to ignore him until 5 pm to feed him. At 6 I reheated my chicken thigh and cooked a cob of corn. The tomatoes and olives were a perfect side to my supper tonight. I picked 5 more ripe tomatoes tonight, an apple off the tree at the road and 1 green tomato from the ground. Supper was delicious and again it felt very healthy. The corn from Independent in Hanover (10 for $2) is so good!

Before Bill left this morning, he set the mouse trap again with peanut butter. We didn’t have any issue for the whole week we were in London but yesterday morning there was another turd in the linen drawer. I’m disappointed that Templeton has taught another family member how to get in but I’m wondering when I’ll hear the “SnAp”. I’m not keen on removing him if we catch him tonight but I’ll take care of it if I have to.

After supper and dishes, ‘we’ watched NCIS and Bill and I chatted again. With the a/c on, it is quite pleasant inside the Suite. Bill informed me that there is a storm blowing through this area tonight and maybe that is what that low-lying blanket is to the west. I don’t like to think about that so in my head have to have a plan in case it gets really nasty. The chance of a storm doesn’t surprise me with the humidity we’ve had, I just don’t like being alone in an rv through one.

Clemson and I went out for a short walk around 8 and came back in for the evening. I know he’ll have to go out once more so there is no point in getting too settled. This has been a nice quiet day and I hope you have had one too.

Thank you for taking the time to check us out today. Your comments are welcome!

Email ThisBlogThis!Share to TwitterShare to FacebookShare to Pinterest
Labels: Beach, Bill and his job, storm, walk
Location: Durham, ON, Canada