The whole family was awake and up at 7 on Friday, Aug. 31st. Last day of the month and although it zipped by like a satellite, August was a good month.

It was busy for us as September is gearing up to be. We’ve had typical Ontario weather, you never know what you’re going to get but we have certainly tasted a bit of 3 seasons up here on The Ridge.

We had our coffee and tea and Bill popped the furnace on for an hour to take the 58F/14C chill out of the Suite. It doesn’t sound cold but I had felt a bit of chill all night on my legs so I needed to warm up. Once the sun made its first appearance, we had soon warmed up to 71F/21C. We caught up on our reading online and I slipped into my hoodie and wind breaker for my walk. It was 8:30 so I was hitting the pavement and gravel later than usual. It was a great morning for a walk. 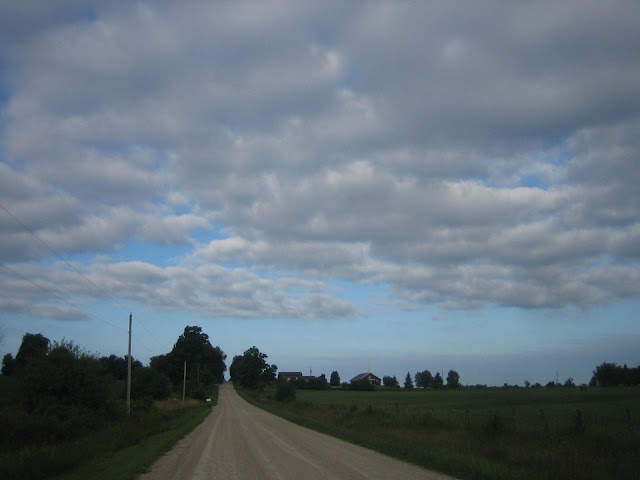 I figured Bill was going for water at the same time so headed towards the north instead of to the turbines. Oh dear! Poor Madame Butterfly was not going to see the light of this day, suffering an unfortunate demise. ☹

When I heard a vehicle, I turned to see a car at the corner instead of Black Beauty so continued on my walk. With a toot toot, Bill in the Rav let me know he was heading first into Durham, in the opposite direction. Oh yah, Home Hardware and the bank. When I got back, I got washed and dressed up a bit as I wanted to go see Mom after breakfast.
Bill returned from town and then went for water. While he was gone I began our bacon and when he came up the drive, I put the eggs in the pan.  I sit and wait looking out the window. The hummers are hungry, oh, I need to boil some sugar water for them, and the finches are emptying their feeder quickly too. I just remembered that I need to send Deb D. something, my brain is like a sieve! So, I went to Facebook and took care of that. If you missed it Deb, it is RVing Rocks!

I found Mom in her room, sound asleep so moved about quietly but making enough noise to rouse her slowly. When her eyes popped open, she soon moved quickly and sat up. She was so pretty in red. Her mood was wonderful and just said she opted to snooze instead of taking a walk down the hall. We sat and chatted for a while and then I suggested getting one of her puzzles out. Donna had done one with her last week and she enjoyed it. We couldn’t find her organ stand so had to do it on the poster board on her bed.

This was terribly uncomfortable but I’m sure it bothered me more than her, she was quite enthralled with the puzzle. We had 40 minutes to finish it and we just made it under the wire. At 11:55 we rode down in the elevator to her dining table.

It was fun, another memorable visit. I stopped briefly to say hello to Aunt Mary and then scooted home. Well, before I made it out of Durham, I convinced myself to stop at Bob’s Used. He always has used furniture out in his shop for sale and I've been meaning to poke around. I found an idea for Bill but will let him decide if he wants to check it out.

The remainder of the day went well. Bill jiggled his cargo trailer down to its location beside the Hangar. This is where it will sit for easy access to his winged toys and we will be able to use the car shelter for its original purpose, finally.

I did some more reading, walking and lazing. I had my shower first while Bill tried to have a doze and then I walked outside some more so my hair would dry naturally. When Bill got up from his ‘rest’ (said he couldn’t drop off because he wanted to) he had a shower and I began supper.

I grilled us each a cheese sandwich, mine with the added goodness of sliced onion and tomato, and we had a yogourt cup and half of a cheesecake cupcake. That hit the spot and hopefully would fulfill us until the morning. Rob and Pat arrived around 5:15 and Bill showed Pat the completed Hangar for the first time. We loaded into the Rav4 and Bill drove. Rob has driven the last couple of times. We drove to Casino Rama in Orillia. Tonight, we were being treated to the Australian Bee Gees! This should be great! 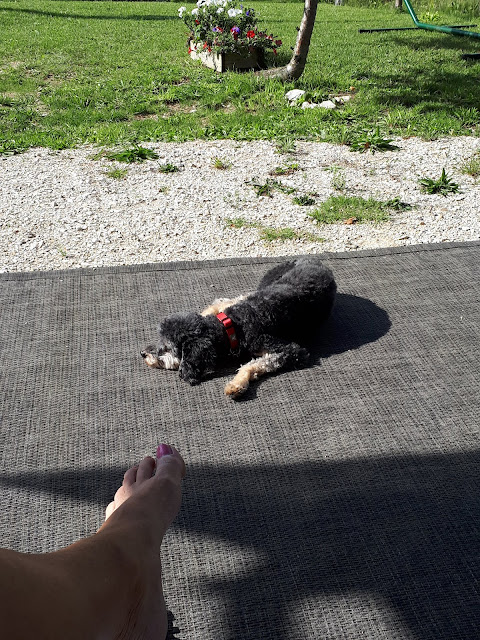 The conversation, as always, was good and we had our many chuckles along the way. We met up with Sandra and Bill in the waiting area and split up to throw some money away. It didn’t take Bill and I long, as usual, to donate our $40 to the cause. I rubbed Sandra’s shoulders because she was HOT again, but I think I rubbed any possible good luck right back on her. She had a great night and that is terrific! The show was excellent. I liked our seats because we were at the end of a row near a wall. That meant no up and down as people needed to get by.

We were out of the Casino around 11:30 and home by 1:15. There was some heavy metal happening on the foot pedal, I think. 😊 Bill wasn’t tired at all, which is great, but I had to fight in the back seat to keep my eyes open. This was a great day and evening. We were pumped and tired when we crawled into bed and I know we didn’t drop off immediately. LOL why does that happen? I wanted to be warm so slipped into jammies and that did the trick. I hope you all had a nice day too.

Thank you for stopping by. Your comments are appreciated!

Posted by Patsy Irene (Chillin' with Patsy) at 7:41 AM