Bill and I were both up before 6:45 on Monday, Feb. 11th. It was still dark and early enough for me to have a tea before I went for my walk. Clemson also got up for his first doggie business and promptly went back to bed with my hoodie. What a little character. When our hot drinks were finished, Bill surprised me by slipping on his runners and joining me on my walk. Yay!

It was a nice leisurely walk around the park and I was able to show Bill the sports courts. We walked up and down most of the park streets where I walk daily and it was nice to share some things that I’ve seen. He agreed that there are tons of seasonal residents in permanent homes from Canada. I think we saw at least 3 others from Ontario. I’d never heard of Lanark so had to look it up on the map. They are a long way from home so it is no wonder they come and stay put. 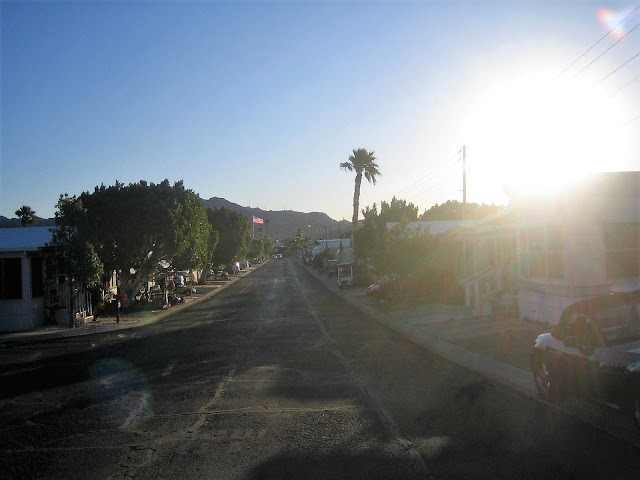 Back home, we stopped in at Rob and Pat’s to respond to their enquiry about us joining them on the drive into Yuma this morning. They have some running around to do but we discussed it and declined the invitation. There is nothing we need at this time and I’d like to tidy up the Suite, I’ve been either busy (!) or lazy and it has been let go. Bill did a nice wash on the shaded windows yesterday so we can see out a whole lot better. I guess, it also shows up more dust now too!

Around 9, I made our omelette sandwiches for breakfast and Bill went online and booked some of the campsites for our trip home. We aren’t rushing anything but we are planners, where some people aren’t. Traveling together with our buddies, we are all of like minds and like to have a general idea of where we’re going and where we’ll be at certain times. We have some ‘definite’ places to stop and ‘definite’ things to do on the way home so it works for us.

After breakfast and dishes were cleaned up, I began cleaning house. It is going to be a warm day again but there is a cool wind right now. 55F/13C which is pretty nice for February at 10 am no matter how you look at it. I rode my bike back to the Clubhouse to see if there was room at the puzzle for me to work. Two people whom I’ve seen before were working on one and Irene welcomed me and moved to make room.

It was started this morning and now it is almost done except for the sky. No, it isn’t an easy one but not the hardest either. I enjoyed it for the next couple of hours before returning to the Suite. Rob and Pat had returned an hour earlier and she and I chatted about tonight’s plans. Rob and Bill were driving to Pilot Knob RV Resort to join in the game of Texas Hold’em with Ken.. They will have fun. Pat and I decided to stay home and do our own thing.

At shortly after 4, I prepped some carrots, onions and potatoes and sautéed ground beef in the Instant Pot. Meal #2! Yay! I added the spices, broth, tomatoes and leftover corn. The recipe called for pearl barley but I didn’t have any. Setting it for 10 minutes on pressure cook, I began smelling the stew within 5 minutes. Yum, I was really getting into this!

Some pressure released during the cook process and when the 10 minutes were up, I waited a 10-minute Natural Release. The thing-a-ma-jig was still up so I did a Quick Release by pushing the nozzle to Venting. I know you don’t need to know all this but I want it recorded for my own learning lesson. I turned it back on to Sauté and added some beef oxo flavoring and corn starch to thicken it a bit. We were eating by 5 and it was a great meal!

After dishes, Bill and Rob left at 6 for Pilot Knob and I sat with Clemson in my chair and crocheted. We never moved for the whole 3 ½ hours. I didn’t need to get up or to disturb the little sleeping guy. I had to stretch my legs a couple of times but we sat and watched a couple of movies together. Bill returned home at 9:30, not a winner, yet he enjoyed the evening with the guys. We sat and watched the last half hour of Jerry Maguire and then an hour of old Mash reruns.

We were in bed by 11 which is past my bedtime by a long shot but no worries, I dropped right off once snuggled under the covers. This was a nice restful day. I had a walk with my best guy, some puzzle time, a bike ride and lots of time with my hobby watching tv with my next best guy. I hope you enjoyed your day.

Thanks for visiting today!

Posted by Patsy Irene (Chillin' with Patsy) at 8:53 AM