On Wednesday, Feb. 27th I had one important thing on my mind. Unfortunately, waking up at 6:30 isn’t a good time to call back to Ontario (2 hours ahead of us) to wish our youngest grandson a Happy Birthday. Nathan, my son’s only child, turns 9 today. He is a handsome, smart and very tall and slim young fella and would already be at or on his way to school by the time Grandma got her butt out of bed.

So, after making my tea (knowing I was already too late), I sat and texted Patrick. I wanted him to know that Nathan was at least thought of first thing. A man of few words, especially when he is working, he responded that he would let him know tonight. He suggested a good time for me to call tonight and have a Facetime with the young lad. I just have to remember 2 hours earlier.

I slipped out for a walk and Bill dozed in his chair at 7:30. He was up with Clemson at 4:30 for a piddle and then up for good an hour later, I think. Again, I am so grateful for my sleep habits. We finished our drinks and since our little guy was fast asleep again on the bed, we slipped out and into town. Fry’s was our first stop to pick up the remaining 6 or 8 items there and then on to Wal-Mart for another handful of things. 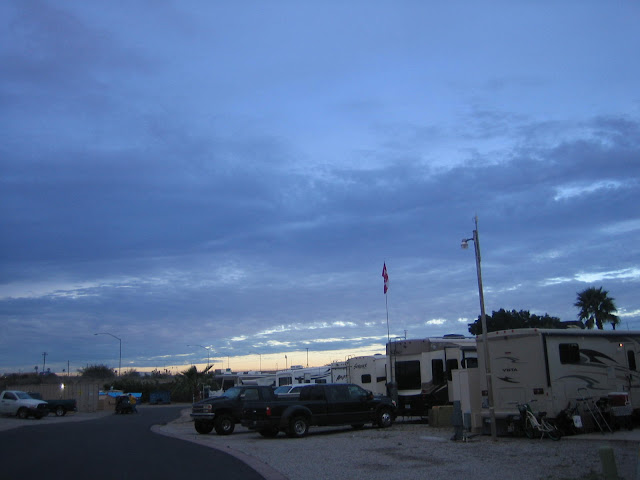 The last stop, just before returning home, was at the AZ Minimall to the Kitchen gadget store. It has another name but that is the name that was suggested to us. It is actually a lot of stores in one area with merely a painted line on the floor separating them. Kind of reminds me of Less Nessman from WKRP. It was indeed a fun store and I’m glad we stopped enabling us both to wander through. Bill found a couple of things and so did I. Some prices were higher than Southwest Exchange but some were lower.


Back at home, I was starving so while Bill loaded a propane tank in Black Beauty, I got stuff out for breakfast. He wanted to get right back in before they closed for the noon hour. Off he went and I put things away and would start cooking in half hour, hoping to time it close to his return. You just never know how big the line-ups will be at the propane stops. I changed into my bathing suit in the hopes of securing a lounge chair when I went back to the pool after lunch. Eat and run, yah.

Bill wasn’t too long getting propane and by the time my poached eggs on toast was ready, he walked in the door for his. Good timing. After we ate, he shooed me off to the pool, offering to clean up the dirty dishes. I didn’t waste any time, grabbing my pool noodle and setting off. I don’t usually ask Pat to join me since she doesn’t like the sun sitting part BUT she does love the water, so I debated. When I arrived and there were only about 5 sunbathers in attendance, I found a chair and texted her. I could save the lounger beside me if she was coming.

Pat replied in the negative which surprised me on this hot day, thinking she would have loved a dip and then she could sit for a bit before heading back. I enjoyed my time there though, and actually got a lot of my book read. 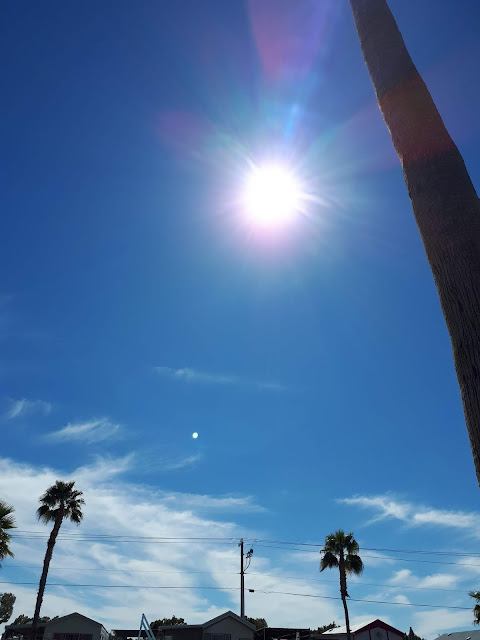 There ensued a water volleyball game around 2:15 which got noisy but because I’d learned to take ear plugs with me, it didn’t interfere with my reading or dozing one tiny bit. At 2:30 I left the area and it was interesting that all chairs were filled. I’m glad I went early.


Back home, Rob was sitting out at their site and my sweetie was sitting out at ours, both with their books. He told me that Clemson hadn’t moved off the bed for supper yet so rather than disturb him, I sat and read some more in the shade with Bill.

At 3:15 he was ready to eat so Bill fed him and we accepted Rob’s invite to Happy Hour today. That is the kind of day we had, warm even in the shade at 78F. I wanted to Facetime with Nathan at 7 so at 5 settled myself on my laptop.

Patrick, my son, was later getting home from work so things were set back a bit and the video call was placed at 5:45. It was nice to see Patrick’s face and then Nate’s. He was involved in his new present, Bumblebee the transformer car. I, at least, knew who that was! Sometimes they talk about things we know nothing about but I was on the ball with this one! It was a very cool toy and I understand his excitement to have it after seeing the movie.

For supper, it was simple, with just loaded bacon cheeseburgers and a piece of cake for dessert. This cake goes on my ‘favourite’s’ list since other than cheesecake, I’m not a cake lover. I took a couple of pieces over to Rob and Pat for their dessert as we’ll need help eating it. Dishes didn’t take long to clean up and I worked on my blog post. With only a day left here, Bill went out to put some fresh water in our tank for Friday’s travel day. We’ll be ‘on the road’ Friday night at a Walmart. 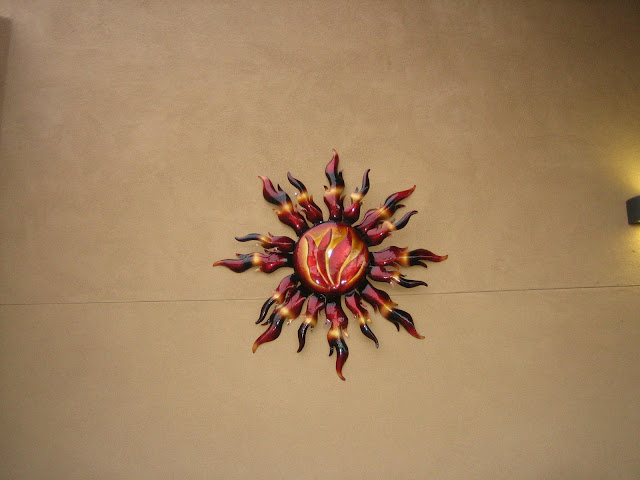 I do love the sunbursts

The rest of the evening was with our books and in front of the tv. My crochet project is in the final stages so I may leave it alone tonight. This has been a wonderful day, I’m happy to get a couple of pool days in before we leave. I hope you are also enjoying this fantastic weather.

Posted by Patsy Irene (Chillin' with Patsy) at 8:40 AM