Laundry on the Line, Some Groceries, Bill Packs and Heads Out

The Ridge
It was cool in the Suite when Bill first woke around 6:30 on Sunday, Sept. 29th so he turned the Blue Flame heater on. By the time we got up for good at 7:15 it had taken some of the chill off. Bill loaded the basket of dirty clothes into Ptooties and I washed, brushed my teeth and followed him outside. He stayed home today and had his coffee. It was 7:45 by the time I arrived at the Mat for my double-duty shift.

First off, I loaded 3 washers and then took care of business. I keep forgetting, until I get in there, to bring in 2 signs that got damaged during painting. Duh! I'll try and remember for next time. The sky was mostly clear blue when I left and so even though it was a chilly 10C/50F outside, I figured the sun and wind would dry the clothes on our line. I drove to Foodland and picked up a few groceries. A few things just for me; while Bill is away, I’ll eat differently.

When I got part way home from town, I noticed clouds had moved in. Lordy oh Lordy! Oh well, I’ll hang the clothes anyway as it isn’t supposed to rain. I backed the car up to the berm and came inside to put the food stuff away. Then I made my tea and decided to drink it before going out to hang them. It was quite chilly out there! Bill carried the basket up the hill for me as he always does. Spoils me terribly, he does! There was still no sun to speak of when I went out to hang stuff and I was chilled to the bone.


Back inside, I got a text from Bill at the Hangar “can you give me a hand to carry the big plane out of the cargo trailer?”. So, we did that, no easy feat moving it into the Hangar. I had the heavy nose because he needed to do more maneuvering from the tail. I hope I don’t have to do that again anytime soon! He needs to empty the cargo trailer of planes so he can take it to Tavistock tonight. He and Bob will spend evenings building a front cupboard in it.

I didn’t realize it was so late, already 10:30, so I used the last 4 pieces of marble rye bread in the fridge and made us French toast. It was yummy with either/or maple syrup from Jamie’s batch and my choke cherry syrup. That was a good choice as now I won’t be tempted to eat the bread while he is away. My goal this week is to avoid that kind of carb – mostly. I’m going to try anyway. While waiting to cook breakfast, I made up my 2 signs and then my new work schedule for the days remaining to clean.

Bill went back outside while I did dishes and he measured the screen openings on our burned out firepit. He has already bought the replacement screening and left it with Rob. Rob will work his magic and make us new ones for our return in the spring. Other than burning cardboard, just to get rid of it, there won’t be any more ‘sit around’ campfires here this year. Inside, I noticed that the sun came out and now I’m at least hopeful for dry clothes before too long. I know it won’t last; the clouds are just as determined. 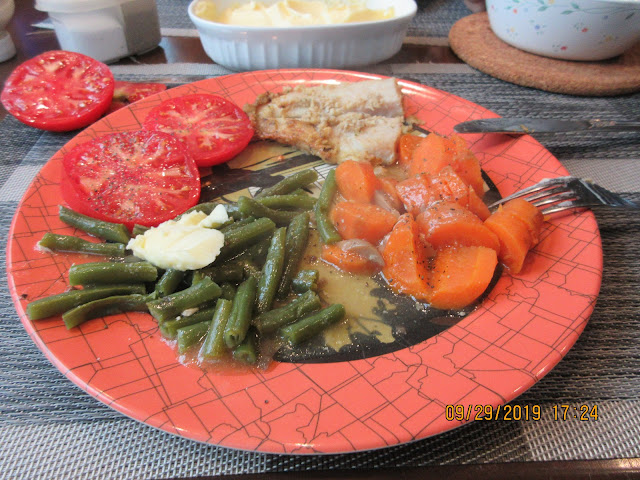 I lifted the scatter mats and swept the Suite out top to bottom. During our last week here, I will get the floors washed. Whether the carpet gets done before we leave is very, very debatable. It just isn’t working out with Bill gone all week. We’ll see. With that done, I took a walk out to watch Bill hook up the cargo trailer to Black Beauty. Boy, is she dirty! That is one of the biggest issues with not having water hookup up here. You have to go into town to pay for a wash and it just isn’t a priority right now.

A couple of times during the cloudy cool afternoon, I went outside to check the clothes. Each time, about 2 hours apart, I brought in the few that were dried. Even the east to west wind up on the hill didn’t seem to help, blocked by the trees. By 4ish, I brought the last items in, Bill’s jeans and a couple of my things. We’d decided to have an easy, early supper so he could be on the road by 6 pm. Jamie texted about not being able to get out to pay Bill today but we weren’t too concerned. Next weekend works well and he can pay both of us. 😉 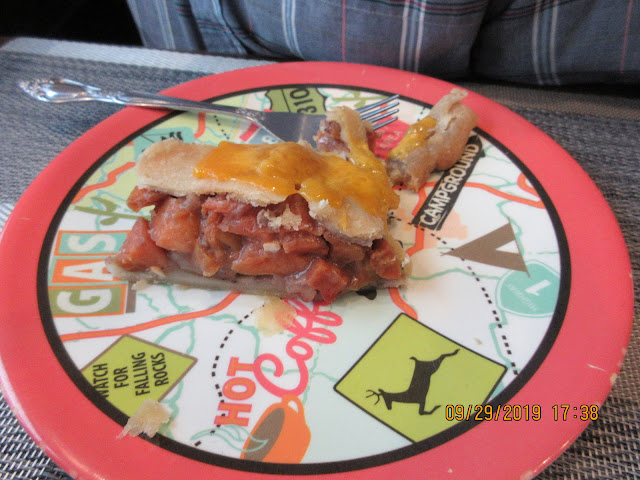 At 5, I started getting the leftover basa filets, potatoes, carrots and green beans out for warming. Nice and easy! I sliced a garden tomato on the side to spruce it up and add a bit more colour. Perfect for the Good Housekeeping magazine? We will each have a piece of apple pie with cheddar for dessert, also warmed up nicely in the oven. The rest of the pie will go in the freezer tonight so I’m not tempted throughout the week. We can have more on the weekend.

I finished my Alex Cross story, Jack and Jill, and it was great and suspenseful right to the bitter end. Tonight, I’ll be watching my recorded This is Us on pvr so won’t start a new one (likely) until tomorrow. Bill is working on Lee Child’s One Shot. He knows that he has read it before but can’t recall how it turns out. Once he nears the end, he’ll remember, I’m sure he will. Ssssh! So, supper turned out good (how could I fail by pushing buttons?) and the apple pie was yummy with the cheese melted over the crust.

I did dishes while Bill loaded the cooler bag and his Zero Coke in the truck. Then he was off. Pretty darn close to 6 o’clock, just as he’d hoped. He’ll meet Bob in Stratford where he’ll drop the cargo trailer and then they’ll go to their home in Tavistock. Weird, but that was hard to see him leave. Gotta keep busy tonight. So, I put dishes away and sat in front of the tv. It is still light enough out that I can leave the blinds open for a while. Heck, the sun (wherever it is over there in the west) hasn’t set yet. When darkness falls, the blinds will be drawn.

Thanks for your visit!

Posted by Patsy Irene (Chillin' with Patsy) at 5:02 PM