We were both up and on the move by 7 this morning, Thursday, Jan. 11th. We hovered around home deciding what plan of action to take. Walk? Wait? Town? Shower? Tea? So, after catching up on our friends’ blogs and comments, Bill decided to get washed and go into Quartzsite early. We have an empty propane tank so our plan is to always fill it immediately, if not sooner. We also needed to fill the gas can for the generator.


While he was gone, I printed off a couple of emails from my sister, Gayle, so I could pick up her parcel when it arrives at Quiet Times. I watched George and Suzie, behind us, pull their coach into a different position. It makes sense since we were blocking their early morning sunrise and with all of the room we have, it was a good move.

Then I noticed Deb and Riley coming down the road with their Dog Sled and Igloo. It was their time to move after 2 weeks here. They had offered us some books which I forgot about yesterday so Deb offered to drop them off this morning.

I walked over to meet them and get one more hug from the two of them. They aren’t going far but I do know we hope to meet up with them again this winter, somewhere.


Out of 14 novels, there are only 3 that we have read or are not interested in. Those are pretty good odds! Thanks, you two, there are many here with new authors to us.

I finished my tea after they pulled off and hopped in the shower. When I finished showering, Bill had returned and he wondered what I was doing in the bathroom so came to check. He found me at the bathroom sink with scissors in hand.

I have been thinking about doing something with my hair for a few days now. Nothing drastic but a change. My hair is so fine that even though I have had the body style all one length for a few years now (easy to pony-tail and hat-tail that way), the very few side pieces along my face constantly break and are always shorter.

I whined but avoided stamping my feet, to Brenda, my stylist back home, ‘why won’t they grow to the same length?’ She told me that’s because it is the area I touch most, the strained pieces. And that is true. Pushing them behind my ears or up under a hat or stretching them as much as possible into an elastic or clip. So, instead of layering my hair all over, making it thinner still, I remembered as a teenager cutting my own hair to frame my face. That way I am in control of the shorter pieces because I put them there intentionally. I know, girl talk, but if Lorne can discuss hair, so can I.

That is what I was doing in the bathroom while my hair was wet. Trimming the side pieces on an angle from the edge of my bangs down to meet the longest parts. I wasn’t doing a bang-up job at it so Bill offered to help. Apparently, I also have my own live-in stylist! He could see easier and did an awesome job. When it dries, we’ll see just how awesome. (ps – I do have a couple of wigs in my cupboard)

I made an omelette for our brunch, just eggs, bacon and green onion today. It was fat-healthy, tasty and mainly, hit the spot. We cleaned up dishes and went for a walk. Knowing it would be a long stretch, we left the master in charge. He took his treat and went immediately up to the bedroom.” Ho-hum”, he’s thinking, “take your time.”

So, we did. I started out in a skinny strapped top and shorts but before the Suite was out of sight, I ran back and grabbed my hoody from Black Beauty. I remembered I’d left it in there yesterday. Aah, much better. Walking away from the sun had me all goose bumpy so the extra layer was appreciated. Bill was in shorts and a t-shirt and merely shrugged, not feeling cold at all.


We took a nice long walk, 30 minutes up towards the front and 30 minutes back. By the time we turned around, I was warm enough to wrap my hoody around my waist and embrace the sun. I really enjoy it when Bill joins me on my walk and don’t mind waiting for him to get ready. I’ll take his company when I can get it and I think he appreciates me being with him to slow his pace down. Yes, I’m sure he enjoys it for more than that!
I didn’t take a lot of pictures as I’d purposefully taken my big Canon. I wanted Bill to see what my photos look like before I spot-fixed them, compared to some of the same shots on his. He needs to see if he can clean it up any better than I can. I hope, I hope, I hope.


After we were back, the sun was so welcoming that I perched myself in my chair again. I’m taking every opportunity to get some reading done and so is Bill.

First though, he did more puttering on the back side of the Suite, he’ll have to tell you what he did besides put the propane tank in its slot. Then we all 3 sat together outside for upwards of an hour and a half before Bill retreated inside. We had our awnings out but not the sun shade and he can only sit in the sun for so long.

Eventually, within half hour, I moved inside too and we poured a drink to take over to Happy Hour at George and Suzie’s.  Before too long, Tom and Deb joined us for a casual chit chat until 4:30, when it was time to move home and start supper prep. Well, it was a little too early to start cooking so we stretched out in the recliners. I won’t say my eyes didn’t close, because they did. I could say I didn’t sleep, that I was just checking out the inside of my lids, but I’m sure there was a drop off in there at some point.


At 5:30 Bill lit the barbecue and I started making the salad. We were eating sausages on a bun with our side dish by 6 and clean up was done soon after. 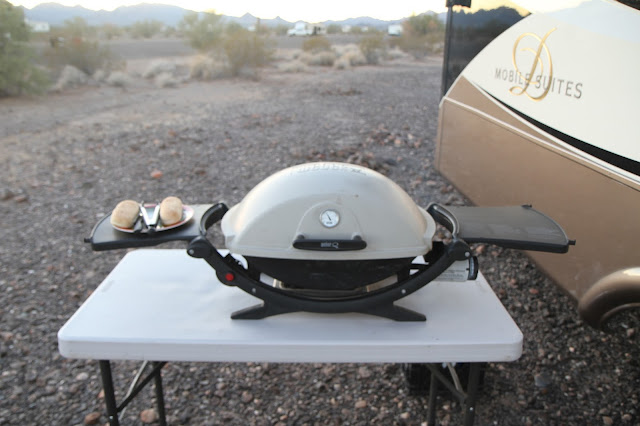 We commented on the fact that by 6:15 we still had a bit of light left. A very little bit and soon it was gone. Bill took his camera outside while he was grilling and took some pictures for me. There was more excitement up the road towards the front so he captured those vehicles on his zoom lens.

After supper, we sat and worked on our blog posts. Give it a few minutes and you can check Bill’s out here if you like. I remembered just now that while I was outside reading earlier, I could see Deb at the sunny corner of their Stinger “B”. I think she was knitting or something like that. She caught the attention of their neighbor, a young boy of maybe 8 or 10 who was flying a Shuttle kite.

I couldn’t hear the whole conversation, naturally, and I certainly wasn’t trying to eavesdrop but he sounded like a very polite young man. Reminded me very much of my son at that age and what his son will be like. Patrick loved to chit chat with adults when we camped, he’d wander off on his own and be sitting at their table in a full-on conversation. It wasn’t such a big deal back in the 80’s.

This has been another fairly quiet day and good from beginning to end. I hope you have enjoyed yours. As a final note, we heard early this morning that our friend who had heart surgery back in London, Ontario yesterday morning is doing fine and there is no better way, my friends, to start a day than with wonderful news like that. Yay!

Thank you for reading today. If you wish to leave a comment, I’d be interested in what you have to say!
Posted by Patsy Irene (Chillin' with Patsy) at 8:32 PM