When I felt mostly awake this morning, Thursday, Jan. 25th, the clock read 7:15. I know I’d been awake around 6:30 but obviously dropped back into dreamland easily. I peeked out my blind without disturbing my bedmates and the gorgeous pink sky to the east encouraged me to get the heck up! As I was dressing, Bill and Clemson also stirred and got up.
After letting the pooch out and snapping some pictures, we got our tea and coffee made. It was a pleasant 63F inside the Suite and quite comfortable.

I could tell without checking the outside temperature that it was warmer than yesterday’s start up. Sure enough, it was resting around 46F. Bill got cleaned up, had his cereal before going out to change the oil in the generator. Yup, he read the instructions that said to change the oil after the 5 hour break in period and purchased oil yesterday at Chevron.

While he was outside, I made my bowl of yogourt, banana, flax seed and some of my homemade applesauce. I’m going to put in a forceful effort of cutting out the bread and cereal for a few days, slowly getting back on track with my paleo eating habits. Don’t hold your breath, I fall off the wagon quite a bit in my efforts and come up with bruised ego instead of bruised knees. It is all on me to do this.

Today, we are taking a day off from the hustle and bustle. Ha ha, too funny. We have one busy day, then take a day off. Dad says in this life we don’t get vacation and as true as that is, we still feel the need to take a day off here and there. No holiday pay though. Bill chose to work on his vacation and replaced the bulbs that he bought yesterday so our scare lights on the 4 corners will be brilliant and more efficient now. 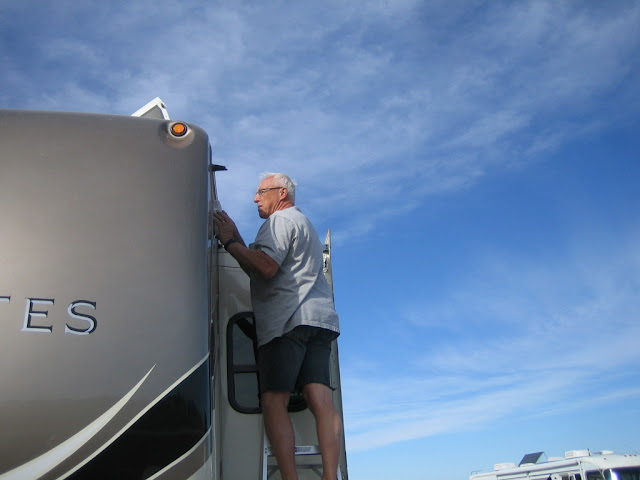 While he was prepping to do that, I cleaned up also and went for my walk, hoping to bump up the steps today from yesterday. 5 miles is a daily goal here during the winter and 2 miles at least back home. Some days I meet it, some days I don’t quite make it. That is another wagon I tend to slip off now and again. But it is good to have goals, right?

First, I took Clemson for a walk back to the south and let him water the rocks a few times, sprinkles here and droplets there. Once he is done with that business, he walks pretty good, sometimes, usually, once in a while, you get the picture. I dropped him off at home and took my windbreaker off. It was warmer than I thought.

I headed up the main road towards the gate and got as far as the garbage dumpsters and the rv dump station. I should have swapped out the sweatshirt for the windbreaker because I was almost too warm. I knew I wouldn’t make it to the front gate in all these clothes even WITH my water. So, I cut in behind the rv’s waiting in line and took a new route back. I came across this “Y” (why?) in the road and took the obvious choice.

All roads lead to home, eventually, so I kept on trucking. It meant only a 2.5 mile walk this morning but that is pretty good. By the time I finished my day, I’d made 3 miles.
When I got back home, Bill and I headed into Quartzsite both with a place in mind to stop at. It was a zoo. Let me repeat that. IT WAS A ZOOOO! What did we expect at 11:30, I guess? Did we really think people went home for lunch?

No worries, we aren’t in a rush and it was a day off, remember? We saw many vehicles jamming up at the lights trying to make a left hand turn onto Kuehn St. (the main drag for the vendors) so we went straight through to Main St. Bill drove to Dollar General on the west end of town and I was thrilled to find my clear sheet protectors for a buck. Yay!
From there we went to a vendor selling flags so Bill was able to get a 3’ x 5’ Canadian flag to match the 3’ x 5’ American flag he already has. In Canada, our flags are different sizes. Their length is exactly twice the width so our flag from home, the one we’ve been flying is 27” x 54". Bill wants to respect the appropriate flag etiquette and at the same time not upset any of our southern neighbours.
When we got back home we made an important phone call. We knew our friend in Ontario was home recovering from triple by-pass surgery and coming along pretty well. We also knew, from his wife’s email updates, that Jim was on his computer near a phone for much of the day. Other than his who knows how many mile walker walks around the path in their home, I mean. So, we made a phone call. 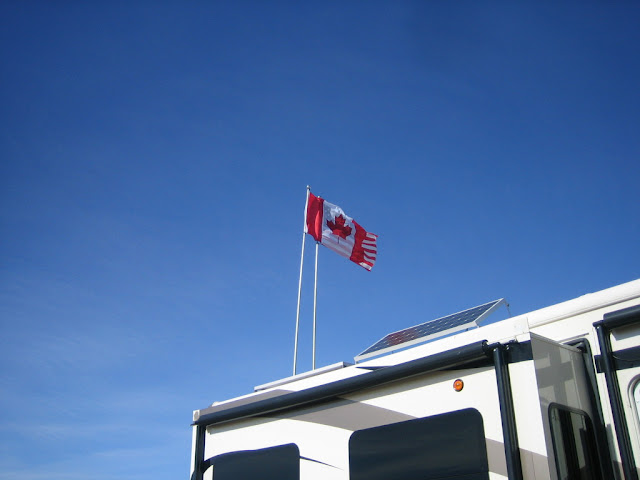 I don’t know about your friends, but after the traditional pleasantries of the greeting, when Jim lights into a joke that has us rolling on the floor laughing (ROFL) we have all the answer we need. He is doing amazing! It was great to hear his voice, so chipper and positive. Our only regret was that we missed Sharon, as she was out line-dancing, two-stepping without the walker. We’ll definitely call again.

That done, Bill took the time to make sure both same-sized flags were the same height on the poles before he was happy. I know the saying is Happy Wife, Happy Life but there must be something about a Happy Hubby too. He’s happy, I’m happy. We had a bowl of my chicken noodle soup and I did well by avoiding the tempting bun with peanut butter. In other words, I stayed on the wagon. 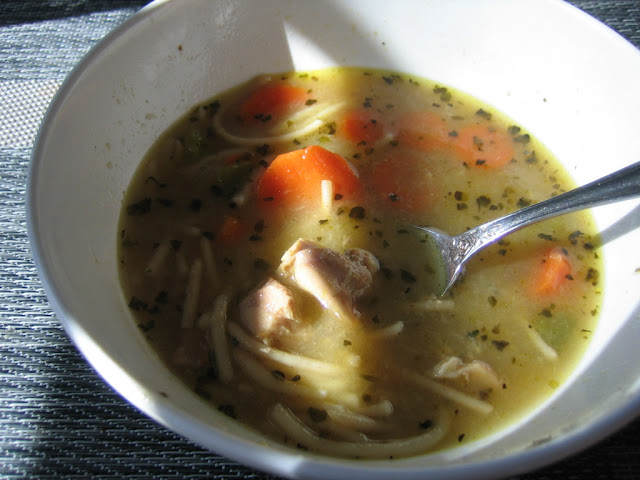 I have a small bowl left for one more lunch. I’ll have to make that again, it was a hit! We did the dishes up and I went outside with Clemson for awhile and I can’t remember what Bill did. I think he sat inside reading, it’s all a blur already. I did a quick sweep through with the duster, after having windows open you can guess what it did inside.

At 2:45 even though it was windy, it was quite warm around 74F so I texted Suzie and Deb that we’d host Happy Hour after having missed yesterday. They joined us and we hoped that Ken and Shirley would also make their way here. Which they soon did. Yay! The gang’s all here! I made a coffee today and opened one of the small bottles of 99 XXpresso liquer to add to it. Hmm, not bad at all. When the sun slipped behind the cirrus clouds, it did cool down a bit and by 5 it was time to be heading home.

Bill and I quickly agreed that we would boil the sausage inside instead of grilling on the Weber. No wind breaker yet. With the sausages on a gentle boil, I hopped in the shower while the Suite was nice and warm. We want to head out early in the morning so it would be best to take care of that now.

I made up a salad and after they were cooked through, I browned the sausages in the fry pan. It was quick to heat Bill’s bun under the lid for the last minute. I decided to try a Lettuce-wrapped Sausage instead of a bun and it worked not too badly. Messy, not perfect but still good and I avoided the bread tonight. 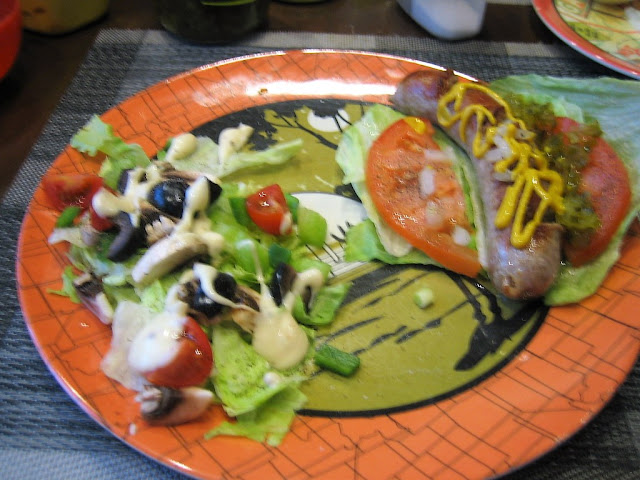 During our meal, I was a nuisance I suppose but the sky kept changing so I was up and down like a yo-yo. Can you blame me? 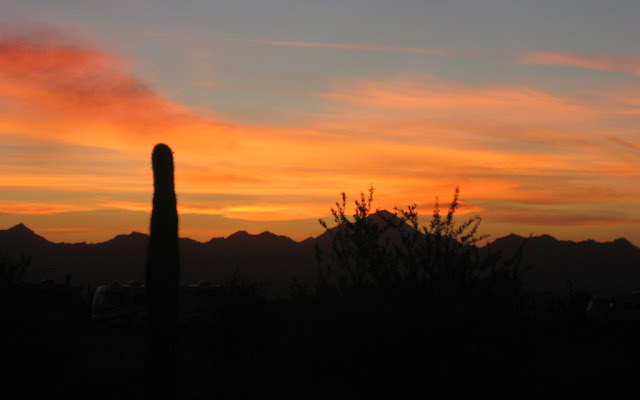 The rest of the evening was me finishing with my pictures to post this and then both of us reading our books. 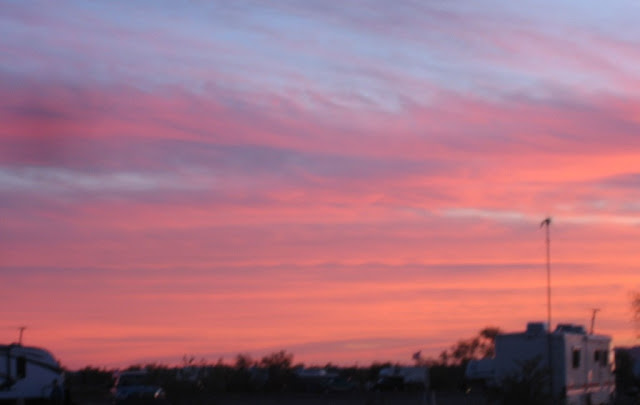 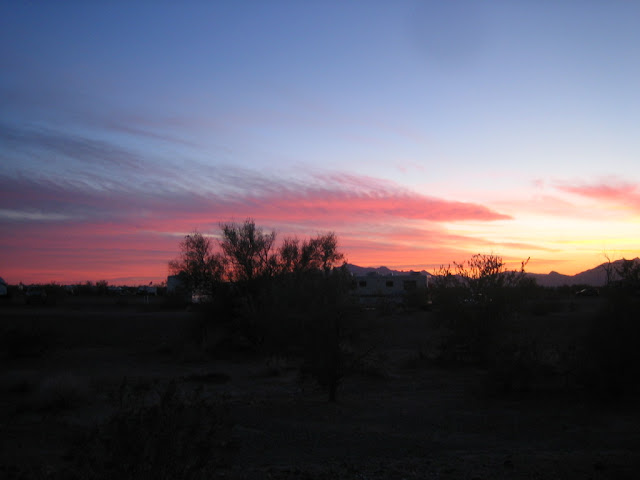 Nothing on television tonight appeals to us so we don’t need to run the generator. It has been a great slow-going day.

Thank you for stopping by. I’d love to hear from you, I read all comments.
Posted by Patsy Irene (Chillin' with Patsy) at 8:53 PM