On Tuesday, Jan. 23rd (wow, where did the month go?) I was awake close to 6:30 but remained in my tossing, flipping, rolling mode until just after 7. I did the Martha Stewart stretches from reclining position and got up. It was warm in the Suite because we left the heater on its low setting through the night. Bill and Clemson followed soon after. 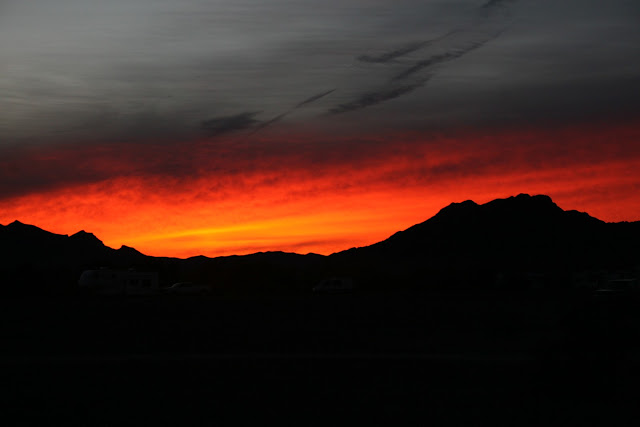 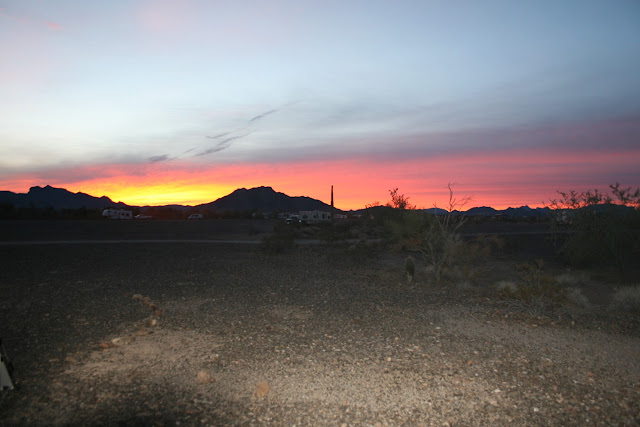 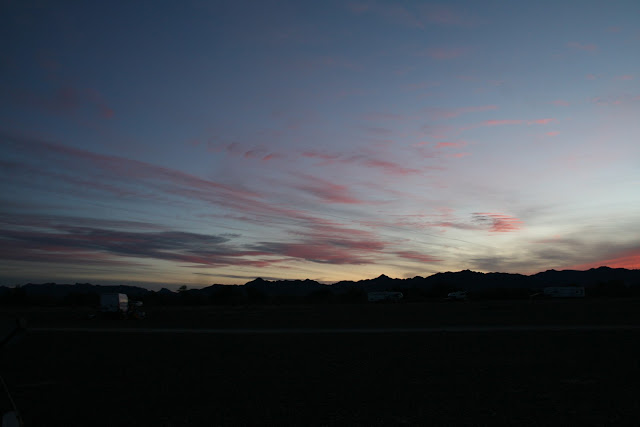 I had snapped a morning picture, they often look identical and I could use the same one and you’d not be the wiser! I didn’t do that though, just so you know.

I turned the Keurig on and made our hot brews. It was 8:30 or so when we finished catching up on our friends’ blog posts but Bill wanted to get ‘to work’. He needs something in his belly before doing that so I fried up eggs and bacon for an earlier than usual breakfast.

While he was getting the ladder set up, off I went with my bag of empty dvd cases and a book. At least every other day, I’m trying to do the long 2-mile walk up to the gate and today was the day. I find if I walk it at a leisurely pace, it doesn’t seem far at all. Sometimes, I have to rein myself in too and slow down. After all, it is only 15 mph in here!

I’d read on a comment that our blogger friends Ken and Shirley had arrived at La Posa yesterday. They live in northern Nevada and have been working their way down to warmer climates for just over a week, I think. I’m so anxious to meet them, well, I mean WE are. Just knowing they are here now, gave me the ‘itch’ to meet them.

On the walk out to the gate, I looked for their Jayco and truck. I researched (ha ha aka stalked) what they drive so I could pick them out. I thought I saw their rig but couldn’t identify the truck parked there other than it was the same colour. “On the way back, I’ll stop”, I’m thinking. I got to the front and posted Bill’s flyer about the generator. We are trying to sell it here rather than carting it home again to sell.

I walked around to the Gate Office and walked in. I was greeted by the volunteers’ ready smiles and that makes my day. I welcomed them back and they responded that they were happy to BE back. I put our book on the shelf and I sat to explore the other titles at the same time taking a load off. I found a couple more that we haven’t read and headed back. As I turned around, it was necessary to put my hood down and slip my gloves off. Gorgeous!
As I past the Blue Boy dump station, which by the way only had a couple in line, I began watching for the Jayco. Oh my! There it is! It wasn’t the one I first saw, this one was all by itself and beside it was the Tundra. I had no doubts who it was and I also had no doubts that I was going to interfere in their lives and introduce myself.

As I approached the rv, I could hear “It’s Patsy!” just before the door opened. Out bounded Shirley, yes bounded with her arms outstretched for a big welcoming hug. This is what it is like. We’ve only followed each other’s blogs for 6 to 8 months, never met, yet it seems like we’ve known them for a long time. I was so pleased that she felt that same connection and joy that I did.
When Ken came out I ashamed to say I pushed his offer to shake my hand away and gave him a hug. “What was I thinking?” he commented later (or something similar) about offering his hand “we are already friends!” I stood with them and chatted for maybe 10 minutes and left with their promise to stop in for Happy Hour later. Yay! It felt so great to meet them and put a smile on my face that I carried all the way back to the Suite.

I was excited to tell Bill and he was happy I stopped to meet them. He was finished with the light ‘exploration’ and was about to climb up on the roof with the Windex to wash solar panels. First, we had another drink and then he got them all sparkling again. They were so dirty/dusty. It didn’t take him long and he was down doing Black Beauty’s windows and putting his California duster to work. Things are looking spiffy now!
Tonight, even though a nice night to barbecue, we’re having the leftover hamburger gravy mixture with potatoes and Red Lobster Cheddar Biscuits. Bill settled inside in his chair, with his book and semi-sleepy eyes and I went outside with my book as well. The temperature today has already risen above yesterday’s high of 60F. It is resting at 64F at 1 pm.

The rest of the day was a very relaxing one. I got a few chapters read and Bill managed to do the same. Just when he thought he’d have a snooze, his mind wouldn’t stop so he got up and gave up on that idea.

Before we knew it, it was time to make a drink and head over to Tom and Deb’s for Happy Hour. We just got comfortable and our expected guests arrived.

Ken and Shirley pulled up in their big truck and joined us. Tom and Deb had provided extra chairs so that made it easy for them to walk in and just relax with us. It was so great to meet fellow bloggers like this and I knew Bill would hit it off with them like I did earlier this morning. There is no lapse in conversation, we sure cover all the bases.

At 5 we had to break up the gang and head home for supper. Leftovers like I mentioned above were easy to prepare and the biscuits were yummy! Bill had no hesitation starting the new genny, he is so proud. 😊 With dishes cleaned up we settled in to watch our programs. It IS Tuesday night after all and they started at 6 pm MT.

This has been a wonderful day. We made new friends or should I say that we united with friends we already knew on a blog. That is what it feels like. I hope you have had a good day as well.

Thankyou for reading today. I love hearing from you!
Posted by Patsy Irene (Chillin' with Patsy) at 9:04 PM