We woke up around 6:45 on Friday, Jan. 12th when Clemson jumped off the bed.
He needed to go out but it was too early for us to rise for the day so Bill lit the Blue Flame heater and we crawled back into bed for another 30 minutes or so. Yesterday, was such a prime day that we were looking forward to another one the same. When the sun popped over the mountain to our east, we knew chances were pretty good. 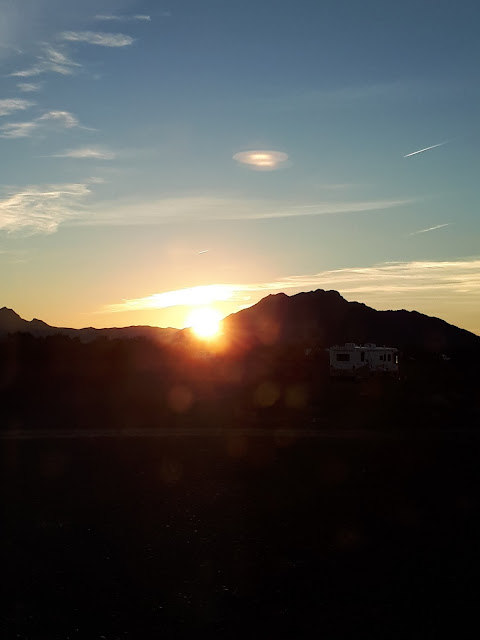 We decided to have our morning brew before heading out for a walk and as usual, when I saw 51F I thought I’d be cold. I triple layered with a light hoody and then a heavy hoody and my yellow neck scarf. I stepped outside with Bill in his shorts and tee shirt to put my runners on and soon removed the light hoody and the scarf. What was I thinking? This is Arizona and that sun was already warm!

Bill and I headed in a different direction this morning just after 8:30. I wanted to show him where the sign was for the Magic Circle, the one with the map.

We captured some pictures of some of the saguaro cacti and I was curious to see if Deb D’s favourite, ocotillo (oc-a-tiyo) was any greener after the rainfall. Well, from a distance it looked quite brown but up close, yay!

We turned at the entrance to the Nude Sunbather’s camping area and made our way back towards the north/front entrance.


We found a couple of really nice areas that we would consider on our next visit just need to remember where they are. Back home along the main road found us both feeling the heat. I had to remove the hoody and the fingerless gloves. We picked the perfect time to take our 2-mile walk. 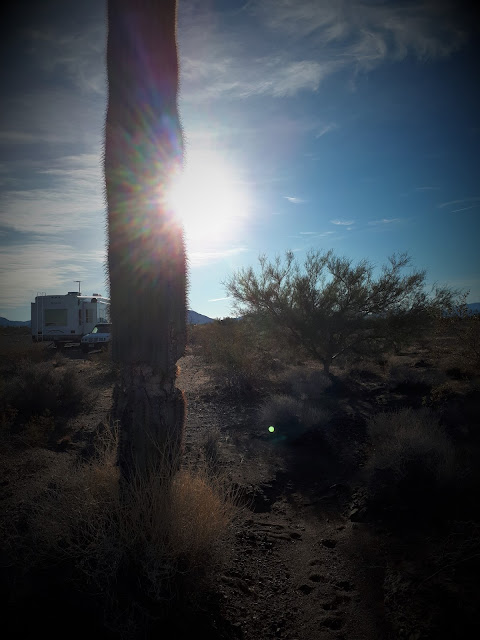 Moving inside we had breakfast, just a bowl of cereal today with flax seed. I figure every 3 or 4 days I can handle some grains with my Kombucha. That’s when I don’t feel like making bacon and eggs. Today, I’ve promised my sweetie a rhubarb pie so I want to do that before starting into a new book. I finished Lee Child’s Never Go Back last night. So good!

Bill went up for his shower and I started getting stuff out to bake. I have a pastry mat that works well rather than making a mess on the counter top and I decided to use my wooden rolling pin. When water isn’t being conserved, I’ll use the one Rob, my buddy back home, gave me, the hollow plastic one that you fill for weight. Get ready, buddy, I’m making pies! 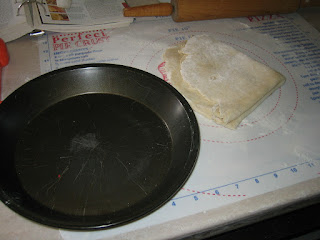 So, I just made a single pie crust because my rhubarb pie recipe calls for a crumble top crust. When I was almost ready to pop it in the convection oven, Bill turned the generator on and the inverter off. 25 minutes with foil around the edges and 25 minutes without. As usual, there was enough dough leftover to make an apple turnover, this time using up my homemade apple sauce from last summer.


While that was baking, I quickly tossed the ingredients for a Peanut Butter Pie. I had one pre-made graham cracker pie crust that needed to be used up. Bill loves his peanut butter so I knew this would be welcomed too. Unfortunately, the filling was so thick that it broke the crumb crust into pieces when I spooned it in, but it will taste the same and only needs to go into the fridge to solidify.

With that done, I went out with Bill and my new book. James Patterson’s Cross Justice. Back to Alex Cross this time. We noticed Clemson going from sun on his stool to under the Suite for shade and back and forth.
Bill somethings thinks it is a worthless endeavor but I got his little red folding tent out, tossed his blanket and my shirt in it……oh, and a large rock to hold it in place. The little bum went in at shortly after 12 noon and hasn’t left it since.

The breeze can blow through and he is in the shade but still toasty warm. I’d say he’s happy! I came inside at 1 and warmed up some of the bean soup for our lunch. First time Clemson didn’t need to come in with us. He is too comfortable in his own little ‘Suite’. We were back outside after lunch with our books. I was happy to see Bill taking more pictures with his big Canon, sometimes the surroundings are all we need for an interest to take off.

At 2 or so, I wanted to stretch out a bit, outside, and maybe close my peepers so I got out my ‘antique’ lawn chair as Brenda so eloquently put it. That is exactly what it is and I love it! I do need to place my blanket on it so I don’t fall through the holes (as if!) but it has 4 reclining positions and I remained in it, on it for the remainder of the day.

George from Our Awesome Travels,called across and asked if we were hosting H.H. and that Len and Brenda were popping over from Tyson Wells LTVA. Bill is posting tonight at On Our Way so will post the Happy Hour photo of the day.

So, at 3, Happy Hour came together. George, Suzie, Tom, Deb, Len, Brenda, Clemson, Bill and I. It was a nice group and it didn’t break up until about 5:30. We were pretty much talked out by then and it was starting to cool down.

Bill lit the barbecue and when warmed, put our Italian meatballs on the grill mat. I had wrapped my portion of spaghetti squash in tin foil for grilling as well.

When the meatballs were done, Bill’s noodles were done, the sauce was warmed and I could scrape enough off the squash for my ‘noodles’. 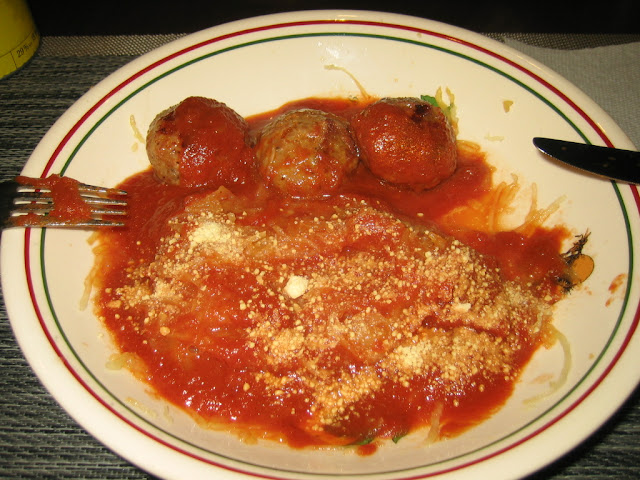 Bill wasn’t crazy about the meal but I rather enjoyed it. Maybe the noodles weren’t done enough, another couple of minutes might have been perfect. We decided to have our piece of rhubarb pie right away instead of waiting like we usually do.

This way the dishes could all be cleaned up tonight instead of having some in the sink in the morning. And, the pie turned out delicious!

So! Dishes are all done, Bill and I are downloading pictures that were taken today and I’m finishing up this post while Bill writes another one. It was another great day in the desert, they just keep coming into our welcoming arms! I hope you can say that yours was a good day too.

Thank you for sticking your head in. If you’d like to comment, rest assured that I will read and enjoy each one.
Posted by Patsy Irene (Chillin' with Patsy) at 9:12 PM