I woke up on Saturday, Jan. 27th around 6:45 to the sound of Clemson doing his morning shake. I expected him to jump off the bed next to go out, which would mean I’d have to throw some clothes on and not dawdle. When he has to go, he has to go, like us. Surprisingly, he just changed positions and lay back down again.

I was wide awake but didn’t move to get up until about 5 minutes after 7. Last night I took my book up to bed around 9:30 and read until 10. I knew Bill had plans to finish his book so no idea what time he joined Clemson and I. I need my 8 hours of sleep during the night so can’t keep the hours he keeps. It also explains why he is in ‘need’ of an afternoon nap more than I do.

We had talked last night about moving by 8 this morning to go into town to get cream and a jug of Vitamin D milk. Just enough to tie us over until we get to our next destination. Bill checked our online banking and was happy to see our CPP (Canada Pension Plans) and his OAS (Old Age Security) payments were deposited. The bonus was that all 3 had increased with a total of an extra $25ish. You gotta love that!

So, now that we can afford to buy some dairy (ha ha, just kidding!) we hopped in Black Beauty, all 3 of us, around 8 or so and went first to the General Store. I’d never been there. I was horrified when I saw the price of Homogenized milk for $3.99 and disappointed that they had no Half & Half creamer, clearly visible. Even if they had it I'm sure the price would knock me over.

I left the store and we drove back to Roadrunner. Well, their price wasn’t much better but it saved us 30 cents on the milk and made up for our gain but gouging us for the creamer. Glad it is only a one-time purchase but it wasn’t worth the drive to Blythe for 2 things. We are feeling the itch, now that the show is basically over (for us) to get the wheels in motion. It will be nice to be set up in a park setting for a while.

We got back home, had our tea and coffee. It is like a reward when you have to do something to earn that first one! I made bacon and eggs for breakfast and Bill and I shared the Mineola orange that George gave us yesterday to try. It was very juicy and yup, tasted like an orange! 😊 We cleaned up dishes and took care of our personal hygiene (fancy, eh?).
Bill has been wanting to get his drone out and things seem to get in the way, so this morning it was first on his list. While he was hovering overhead, I took my water, phone, camera and his completed book and strolled up to the front gate. I took the back way this time and figured I’d avoid a lot of the main street traffic. I did, actually, but came out just before the big dump station in time to see the 18 rv’s lined up to dump their tanks.
At 53F and with the wind from the north in my face I was grateful for my light sweatshirt and wind breaker. I noticed Ken working in the back of their truck but I was on the wrong side to chat. I didn’t see Shirley around.

I exchanged a book, checked out the free stuff and headed back home. By this time, their Toyota was gone and even though the outside door was open, I still didn’t stop. With our commitment today at 1, I needed to keep moving. It was already 11:20.

Ken honked when he passed me coming back from getting water perhaps. We’ll see them at Bloggerfest today. By the time I got back it was 11:45 so a nice hour walk. I have a Fitbit, I’m sure I’ve mentioned that before. I love my Fitbit. It is my encouragement to walk when nothing else works. It has a job to do though and when it fails to do that job, I get frustrated with it as I would any employee of mine. 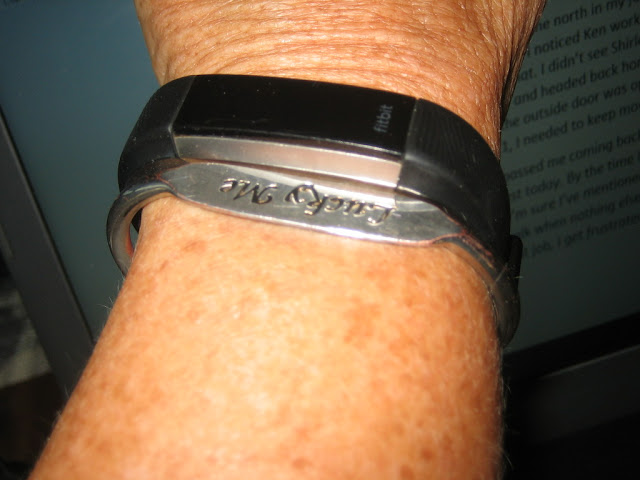 For the last 3 days, I have been unable to get it to sync. Here I am walking and adding steps daily and it won't record on my laptop app. Bill has a Fitbit also and each day I hear “I synced okay”, “Mine synced”. Infuriating!! Not Bill, the watch/nagger/brat on my wrist. My, how my feelings change when something doesn’t perform properly! Anyway, before I left for my walk, I downloaded the Fitbit app on my phone. It still didn’t sync which makes me think it is a problem with the device itself. Hmm.

I came back from walking, sat down with my phone and checked it for shits and giggles (or grumbles and groans). Tadah!! It synced! So, I’m a happy camper again, literally. I have a few friends with Fitbits online and each day you can see where you rank in the world of walking. I’ve been at the bottom since Wednesday. Now, I’ve moved up to 3rd. I’m sure you’re interested in all that babble. I know, as long as I’m happy. 😊

Bill had a doze with Clemson in his chair and I felt the need for something to munch on. I can easily satisfy that with some yogourt and cottage cheese, which I did. At 1 o’clock we loaded the truck with our chairs, a cooler with drinks and a snack to take up to the pavilion aka Ramada Inn. Bloggerfest was about to begin and as we pulled out, so did Deb and Tom and George and Suzie. Paula (Shadow Moss) from Arizona (In the Shadows) spoke briefly, thanking everyone for coming and thus began the Circle Chat.

We took turns introducing ourselves, naming our blogs and stating a brief bit of information about ourselves. Then it was a free for all. How nice to meet other 'new to us bloggers', Steve and Jane from Ontario (Rollingfrom Wasaga), and Anne from the PNW (Right Brain; Right Lane).

We got to re-meet Stacie and Bob from B.C. (Maxx Trails),

chat again with Dave and Cheryl from Alberta (Our View fromHere),

reconnect with Doug and Yuma from (Miss Adventure Travels),

and see Rick and Kathy from Ontario again (It’s About Time).

I can’t stop there because of course we also had our buddies here in Quartzsite, George and Suzie from Ontario (OurAwesome Travels),

Tom and Deb from Upper Michigan (Celebrating the Dance)

and Ken and Shirley from Nevada (Seeing America with Ken and Shirley). These are our Happy Hour amigos. I regret that I didn't get pictures of everyone but it was a nice personal gathering of 22. One couple from East Texas do not write a blog but stopped in to meet us all. They read blogs and maybe now they'll follow some of us. 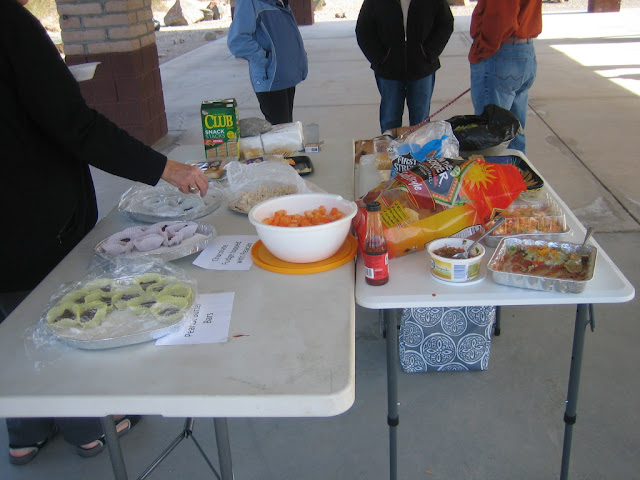 There were delicious snacks under the pavilion and we all had no excuse if we chose to walk away with an empty tummy. The peanut butter squares were awesome as were the cream cheese roll-ups and the 7-layer dip. Oh my!
People started saying goodbye around 3:30 and by 3:50 we were also on the road for home. We could hear voices behind us and so Bill poured a drink and I took my water over to join the Amigos.

We said our goodbyes to Ken and Shirley as they are pulling out in the morning. It was so great to meet them after following their blog and we certainly will do our best to cross paths again down the road. We had decided on fish and chips tonight but opted to grill both on the Weber. Can we make the fries crispy enough? We’re gonna try!

Supper turned out pretty good, the potatoes weren’t as crispy as if we’d done them in our deep fryer but not bad. We don’t regret not turning the genny on to use electric. Bill washed the dishes up, I dried and with so few, we were done by 7. 20 minutes after we started eating. No, we don’t dawdle at the table after dinner. Get ‘er done!

Bill settled in his chair, debating whether he wanted to start a new book or start the generator to watch Live PD. Maybe both! I downloaded my pictures from today and finished jotting notes on this post. Bill was really ahead of the game and before Happy Hour posted on his blog. Show off! You can check it out here. 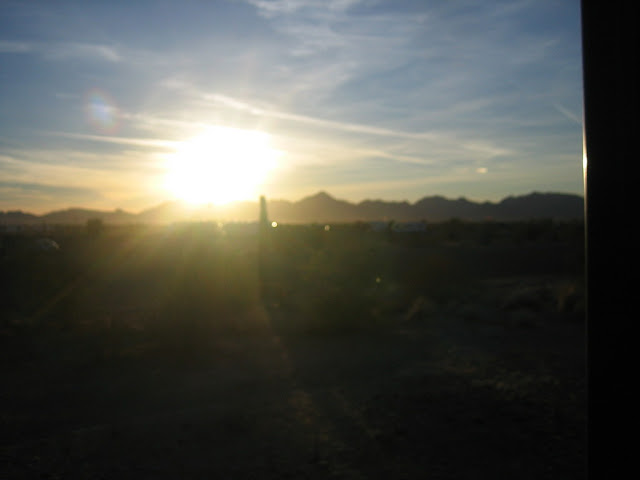 I hope your day has been as nice as ours has. I’m 100 steps shy of making 5 miles today so need to strut my stuff a bit more before going to bed. Yay! Before I do that, I think I'll have an ice cream cone. This Oregon Strawberry is yummy. Clemson gets a cone too. 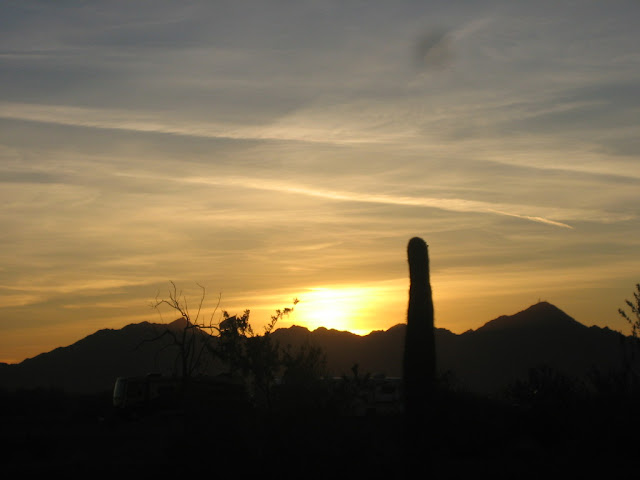 I was waiting for someone to post a group picture of today's Bloggerfest, but want to post this before it gets too late. So, instead I will copy a picture from Bill's post.

Thank you for stopping by. I’d love to hear from you if you wish to comment.
Posted by Patsy Irene (Chillin' with Patsy) at 9:36 PM