As I mentioned last night in yesterday’s posting, we arrived back in Canada safe and sound. We drove into the front of the CanAm RV Centre lot and called their front desk. Richard, who answered, advised us that our Service gal, Peggy, was on the phone but very graciously told us that we were entirely welcome to park and stay. That was wonderful to hear, they’ve never let us down.

As we were preparing to shut down, right where we were, Marshall came out to greet us. From an appropriate ‘social distance’ of about 5’, he greeted and welcomed us home. He was advising us where to move to once business staff left for the day when Peggy came to the door of CanAm and told him that she had reserved a spot for us down the side, with hook ups.

Dave, one of the crew, drove the tractor to show us and help us get the Suite backed in. We’ve said it before and I’ll say it again. The staff here at CanAm are absolutely amazing. We are hoping to stay for 3 nights at the most and then move on up to the Ridge. That will need to be worked out once they open their doors and we can chit chat with Peggy. Things could change drastically here for them as well, if they are forced to shut down during the course of the week.

I just wanted to mention that we were accepted ‘royally’ and that sure improved our situation 100-fold. Meanwhile, it is Saturday, Mar. 21st. We woke up cozy and warm with just our blue flame heater and the fireplace running overnight. The temperature dropped to a chilly -4/25C but until we step outside, we didn’t notice. The sun this morning is up there and the sky looks like it is going to clear out and leave us nothing but blue.

We had our coffee and tea together at 6:30 and I finally caught up on your blogs, at least the last day. I feel relaxed even though things are still unsettled for a few days.

Bill and I at one point this morning, after breakfast had a discussion about why we were hanging around. I was pushing to get up to the Ridge and so, to appease me, Bill checked the weather over the next couple of weeks. When he realized that CanAm could close as early as Monday, he said to go ahead and text our buddy, Rob. I think he was just trying to shut me up! Ha ha, no just kidding.

Within 15 minutes, Rob responded with a picture that the Ridge was very accessible. He must have hopped in the truck right away! The snow was gone where we park, the laneway clear and at our request, he left the gate open. WE WERE GOING HOME! Bill got a bit of info from Andy and received a dump valve for the Suite. Ours has gone screwy and that is something Bill can work on at home. We packed up and by 12:30, we were on the road. We stopped at the Pilot/Flying J for fuel and to dump. It is on the east side of London.

Unfortunately, we couldn’t get the dump valve to open, it was frozen. Since I’d already paid the meagre $5, using our Good Sam card, I went in to see if they issued refunds. The manager came out and said ‘no’ but to go and help myself to a couple of coffees or something to eat. 😊 They were very nice about it. I got a coffee for Bill and a hot chocolate for me, the smallest size. I thanked the cashier as I walked back and she said ‘you should have got the biggest ones!’ I was appreciative that they helped with that. It makes sense that they've never been asked to refund a dump before!

We had a full tank of fuel and had a beautiful day for the drive. We followed the 401 and took the scenic way home through Tavistock, rather than Stratford, which can be a challenge with the large rig.


The roads were smooth and unencumbered with traffic. It was nice to sit back and enjoy the scenery without snow. There are a lot of nice homes along that route and other buildings in the small towns. As we entered Durham, I took a picture of the sign and texted it to our buddies.

Approaching North Line and our lane, it was easy peasy getting up into our spot. Bill backed  straight onto the boards we left in place last fall. It was cold but he was bustling around hooking up the hydro and I was inside setting things up, so we were warm. After putting our propane heater and the fireplace on, Bill brought in an electric heater from his Hangar just for a boost of heat. We were plugged into power so why not? A small heater in the bedroom/bathroom would help warm that area.

I’d finished straightening things and quickly was feeling light-headed. It was a weird feeling but I figured it was due to being hungry. My legs felt weak so I sat down. We’d eaten a good breakfast of bacon and eggs at 10 and it was 4:30. After resting for a bit, I had some cottage cheese and then walked out to find Bill.

We explored the garden, the bunky, outhouse and his Hangar. Things were looking good all around. Dry and the only evidence of mice was in the outhouse, small fluff balls from the garbage. They left the t.p. (that I forgot to put away) alone! He obviously isn’t a hoarder!

We had a large bag of mail and Avon that Gerry left in the outhouse so sat down and went through all of that. Lots of stuff, mostly good as junk mail doesn't get forwarded.

We really appreciate Donna and Gerry collecting our mail for us while we are gone. We have it forwarded from the time we leave until – well, in this case until Apr. 30. We thought we’d be a lot later returning. On Monday, we’ll call them to cancel it and see if they issue refunds. They should since we are back over a month early. We will have our new mailbox up by then too.

I made myself a cup of tea around 6:15 and prepared our pork tenderloin. I spiced  and pounded the two pieces and sautéed them. In the inner pot I mixed up a box of dressing and added some mixed veggies. I’ve never done tenderloin in Madame IP before so I hope it turns out. While it was cooking, I sat and caught up on my blog. I cannot express enough how wonderful it is to be up here for our 2-week quarantine. I feel elated and relaxed and wonderfully isolated.

The feeling we usually relish when we come home will have to wait. The part about seeing family and friends and getting those hugs we missed. Happy hours will be just between the two of us and maybe during a video call but we are following protocol. We have had a few offers of assistance to help us with food etc. and that is just the kind of friends and family we have. Thank you! So far, we are fine. We may need to top up with water but we’ll work that out when we need to.

So, why was I concerned about supper? Well, I’m not sure but I’m happy to say that it was an unnecessary worry. 20 minutes on Manual plus 10 minutes NR and the pork tenderloin, stuffing and veggies were perfect! I need to write that recipe in my Word folder for the next time. 😊 For dessert, we each had a dish of Cherry Creamy Jell-o and that emptied another fridge container. It was delicious too! 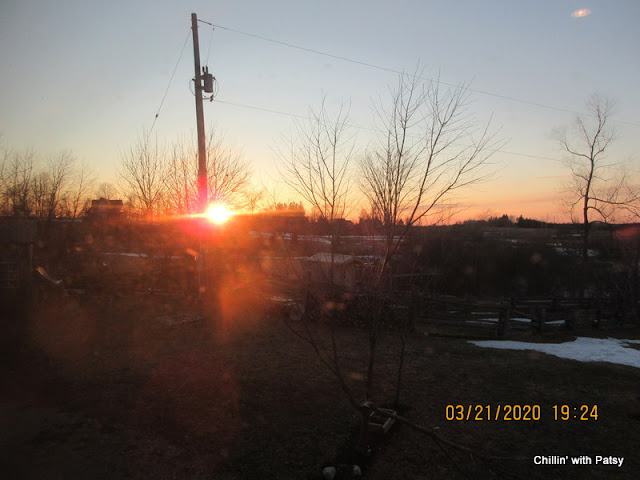 Bill washed and I dried the dishes after catching the first Ridge sunset of the spring. I’m sure there will be plenty more and although they won’t match the Arizona sunsets we’ve witnessed all winter, they will be beautiful. This was a great day and we are now home where we belong for at minimum, two weeks.

Thank you for stopping in! You may leave a comment if you wish or just check a box if you prefer.

Posted by Patsy Irene (Chillin' with Patsy) at 6:37 PM