Boat Ride! Casino for Lunch, I Made it to the Pool!

Lake Havasu City, AZ
Thursday, Mar. 5th we slept in until close to 7. I know it was really late when Bill came to bed but I was gone by 9:30, not able to keep my eyes open. The heat pump had come on this morning which surprised us, knowing we had it set to 65F. Neither of us expected colder temperatures overnight. It was 55F outside and just 65F inside so that explained it. It wasn't on for long before it shut off.

I dressed for my walk which didn’t mean more than my hoody with capris on my legs. I always have my cotton neck scarf and mini gloves with me in case I need them and usually I put them on. There were no winds again and we knew it would be another great sunny, hot day. Today, we’ve all planned to catch the Havasu Landing ferry and go across to the new casino in California for lunch. This should be fun as none of the others have been over.

We hope the lunch at the new casino is as good as at the old one. Jo-Anne texted offering us to ride with them and we’d already planned on hitching along! Woops, we shouldn’t have assumed but we accepted their offer. Keith will be riding in with Ken and Kim as we can’t all fit in one vehicle. It is a perfect day for a boat ride! Bill had some toast early and I had a couple of clementines with my tea which would be just enough until noon. 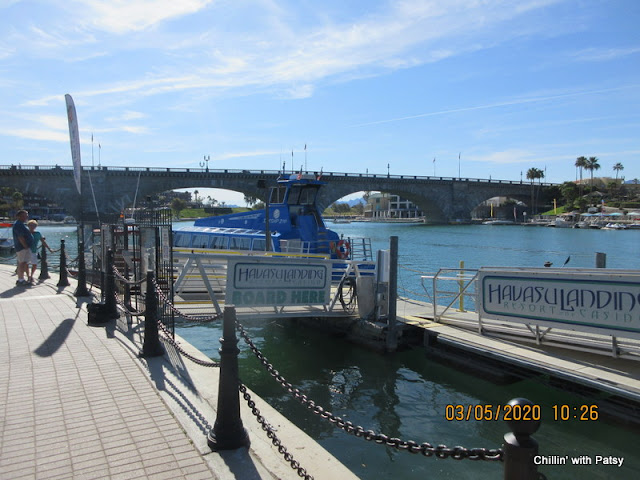 It was a quiet couple of hours and just after 10, Kim, Ken and Keith drove in. They followed us, Bob drove, to meet the ferry. I don’t know what they call the place, Havasu Landing, I guess. There were quite a few people for the first trip at 11 but we were within the first 10 aboard. We took the stairs to the top open-air level and Bob and Keith stayed down on the main deck and stood at the rail. The boat was pretty full.

This was the perfect day for a boat ride. The Tecopa ferry is a $2 round trip ride from Lake Havasu, AZ across the Colorado River to Havasu Landing Casino, CA. When we arrived, our friends signed up for their player’s cards and were rewarded with 10% off their meals today at the restaurant. Bill and I already had cards so were not eligible. That’s okay, we expected that. We were all hungry so went to the restaurant and got seated. The sign ‘Please wait to be seated’ was turned around so we found our own two tables. Woops!

Bill and Kim ordered the Bacon Burger meal, Ken had a Pulled Pork Sandwich meal, Keith and Bob had a Sausage/Ribs Combo meal, Jo-Anne had a Cobb’s Salad and I had a Chicken Quesadilla. I think everyone was pleased with their choices and we paid our bills and walked out through the casino. A few of us played a bit of slots (Bill and I spent $3) and Bob dabbled at Black Jack before we all met outside and the boys had a beer on the patio. The beach looked nice; we haven’t seen a lot of water in the areas we've been in.


We caught the ferry at 1:30 for the ride back to Lake Havasu. We walked the promenade and us girls stuck our heads in a few shops but didn’t buy anything. By this time, we were all hot, tired and ready for home so we said goodbye to the blm group (K, K & K) and Bob drove us home. I changed into my bathing suit right away and after chatting with my son on text, I went to the pool. Yay! He had success picking up my Fitbit Alta tonight. I’m excited!


At the pool, I was the only one. What is wrong with this picture? There was shade to sit in but no one needed to cool off, I guess. It was only 80F. I swam back and forth a couple of times and then stretched out on a lounge chair with my book for about an hour and a half. I didn’t mean to stay quite so long but their clock is behind time by 30 minutes. When I came back and changed, I started getting ready to cook the roast.

After sautéing it, I added the last 3 (need to be eaten) potatoes, some carrots and an onion. Because the roast was so small, I only set it for 25 minutes and will do a NR. If we aren’t hungry enough, it will be easily reheated in Madame IP tomorrow night. The roast took longer than I thought it should but that could be attributed to the poor-quality beef. Anyway, once it was done, we’d already decided that we would eat it tomorrow night. After our big lunch today, we didn’t need such a big meal.

I wrapped things up and put them in the fridge. Bill decided on crackers and cheese for his meal and I opted to put together some lettuce, salmon, cheese and black olives in tacos. It filled me but I think the taco shells are stale as it wasn’t great. We did the few dishes up right away and sat to watch some tv. I worked on my post and downloaded today’s pictures so I can finish my blog. This was a fun day with lunch out with our friends.