Warm Start Up, Gorgeous Day for a Swim, Surprise Visitors

I slept much better through the night, so woke up at what I thought was 6:30 feeling quite refreshed. Today, Sunday, Mar. 8th, our bedroom clock read 6:50 when I got up. I was ready to walk and explore this new park. I hopped in the shower first and then came downstairs, deciding to have my tea with Bill after all. We had nothing planned for today so I was in no rush.


He joined me downstairs and as we were sitting here, I thought “hmm, it is still quite dark out for 7 am”. That’s when I looked at the downstairs clocks and realized that it was only 6 am. LOL Our bedroom clock is fairly new and when we bought it, Bill pushed the button that makes time changes with daylight savings time so it was an hour ahead. Here in Arizona, the time doesn't change so that explained everything! What a curveball that was!

After my tea, I went for my walk and that was when Bill had his shower. This is a lovely park and my initial ‘good vibes’ were confirmed with the large walking area, dog parks and expansions that are going on.

Every building needs a 4-digit code to get in but once we took a picture of those numbers, I couldn’t see a problem with that. I would have my phone with me at all times. I used it to get into the clubhouse, both laundromats, the pool, the washrooms. On the way back, I stopped to greet Oreo and tell Keith about the dog run.

When I returned, Bill was doing the job I said I would do but I so appreciate the way he wields a vacuum! He had a couple of things he wanted to do, one which he needed my help with and one he didn’t so first he fiddled with what he hoped was the cause of a leak that he was noticing inside our ‘garage’. He can explain that when he writes again. When I was done helping him since he didn't need me for the next job, I got out of his hair and went up to the pool for a couple of hours.

There was one lady in the hot tub but other than that, no one around. I was disappointed to discover that they don’t have lounge chairs. I was, however, pleased then that there were no other participants as it meant I could use 2 chairs to my benefit. I turned one around for my feet and sat and read for 20 minutes before getting in for a swim. This pool is not large, maybe 20 – 25’ in length and 3’ deep at each end and 5’ deep in the middle. Works for me!

After a couple of laps end to end, I got out and relaxed in the chairs. My book is so good now that it is very hard to put down. I read for another 45 minutes or so and took another dip in the pool. The lady had left and 3 others had arrived, just sitting at a table. Just before 1pm Keith rode up on his bike to use the facilities and when he saw me, we chatted a bit.

He indicated that he was going for a ride into town so I wished him good luck with the hill and told him to be careful. 😊 I know he will be, his precious cargo is back at his trailer.

It was a few minutes later when I walked back home. Bill was done his second job and was in his chair reading. We had a wee snack of some pecans and I stretched out in my own lounge chair outside. Still in a partially wet bathing suit, I dozed on my stomach. We had invited the other 3 to come for Happy Hour so until about 2:45, I sat out and read more chapters while drying off and sunning at the same time.

Bill moved Black Beauty over so we could sit partially in the shade. That sun was quite hot today, the temperature got up to a lovely 75F/23C. The way the sun is here, it felt much warmer than that. Kim and Ken drove up at 3:15 and within 10 minutes, Keith arrived on his bike with Oreo. He made it back safely, thank goodness. He was kapooped though and will sleep good tonight. It is quite a steep hill to get up and he had to walk up with the bike at his side.

We did our normal HH thing chatting until 5 before our friends left. Bill set up the satellite dish and we connected easily. Inside, I caught up on my post and at a few minutes before 6 got Madame IP out to start cooking chicken breasts. Just a salad on the side was all that was required. I’m going to have to make some more Jello for desserts this week.

I just happened to look out the window and saw a white car slowing down, then backing up, with the couple looking our way. “That’s Jim and Sharon!” I said. We went to the door to greet our friends who just arrived in the park this morning. That is too funny as we were just talking about them at Happy Hour, wondering where they were and when were they coming into Silver View. Now we know!


They came inside and we realized that it was their first time in our Suite. They were very kind and said all the right things to make us feel proud of our home and we had a drink together. At one point, when the conversation got around to George and Suzie, we all toasted them once more. I’d unplugged Madame IP when they arrived, supper could easily wait, and we chatted for about an hour.

Since the 5 of us were going to Oatman in the morning, Jim said to Sharon “why don’t we go too?” They were willing to drive themselves but Bill invited them along in Black Beauty since we’d have room. Kim and Ken had already told us that they were going to drive on their own. They left around 7 (sorry, Sharon, we noticed your sweater after you left) and I got supper going soon after. It was a nice impromptu visit and a treat that they looked us up!

Supper was good and after Sharon’s question of “are you making a sauce?” I decided to make a mushroom-type gravy. With Caesar salad, we were quite full when we finished after 8. When the dishes were done, I sat to work on my post and Bill sat with his book. I wanted to read too but I had a commitment to my blog first. This was a wonderful day and I’m pleased that I actually got some pool time in. Check in tomorrow to see how Oatman went! 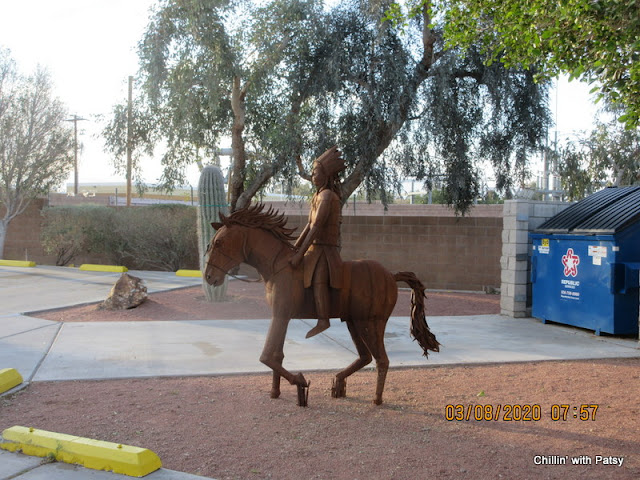