Lake Havasu RV Resort, AZ
On Sunday, Feb…woops! March 1st Bill was up before me and was downstairs with his coffee when I got up at 6:30. He indicated that I should go for my walk as he knows my routine in a new place. Exploring the park and that includes all the buildings. I like to stick my head in to see what is available. Yes, we’ve been here before but it was a couple of years ago and this ole memory isn’t what it used to be.

Once I peeked in the doors, I remembered “ah yes”. There are two sides to this park, in case you have never been here. The west side of London Bridge Rd. and the east side. Each one has a clubhouse and a pool. If there are large events or meals, they take place on the eastern section. We’ve only camped here once before and were located on the east. The park is so full at this time of year, we are lucky to get a spot for our big rig, let alone two!

Bob and Jo-Anne have not been to Lake Havasu City, nor has Keith so there are a few unique things to see. This morning, after my walk, my tea and my shower, Bill drove us all into the Sunday flea market in L.H.C. It is a pretty large market with lots of wares for sale. Other than some clothespins to replace some of my older ones, an eggplant and some mini carrots, we didn’t buy anything. Just looking today. 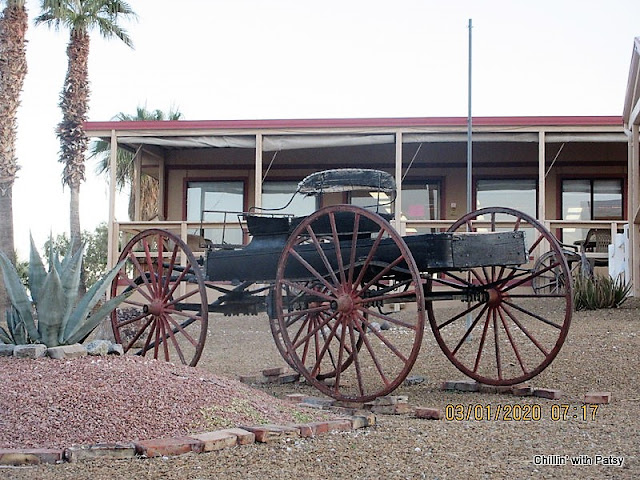 From there, Bill took us (them) on a scenic tour of some of the beautiful homes around the area and we found where George and Rose’s new place is. They were home, so we stopped in briefly just to make introductions and to say ‘hey’. George offered us some oranges and lemons from their tree in the back yard (Lucky!) so I left with a couple of each. Thanks! Rose sounded very excited over the move and discovering what plants and bushes are growing on their property. 😊

We left there and took a drive north of the city to show Bob and Jo-Anne where Keith has set up camp on Lone Tree Hill. He wasn’t around but he is right, he has a nice spot where he can have some privacy for his outdoor shower when he needs to. We have never seen that area (or this park, for that matter) so full as we have never been in this area at this time of year. It was almost noon so we returned home for lunch.
I made us bacon and eggs and Bill sat back to read and doze while I did the dishes.


After catching up on my post for the day, I took my book outside and enjoyed the sunshine. I was out there for about an hour before coming in at 2:30 to search for something on my blog. I was curious to find the dates that we were here in the park, two years ago. We were sure it wasn’t this busy so I wasn’t surprised when we realized that it was November for 2 weeks.

During this process, Jo texted to invite us next door for Happy Hour. After finding what I wanted, I mixed up our drinks. Today, I used more strawberry-daquiri mix than pina colada and used vodka instead of rum. We had more vodka to drink up and I wanted to see what it tasted like. I couldn’t tell much different, it still tasted great to me. Bill was quick to point out that it was good but still NOT a Miami Vice. No worries, it just means I need to keep trying.


We joined our friends until about 4:30 when we moved back home. We were having grilled sausages for supper so Bill lit the barbecue at 5:30 and inside I prepared a salad. Guess what? I did it from scratch! I remembered to buy a head of lettuce and we have celery, green onions, peppers and shredded cheese to add to it. I even have black olives which I added to mine. We were eating by 6 and the sausages were done perfectly. That was a great meal.

After dishes, we scooped up some of our Tillamook Oregon Cherry dark cherry ice cream. With some crushed walnuts and choke cherry sauce, it was a heavenly dessert. We watched American Idol inside while the air outside cooled right off. Also, we kept hearing a loud bang about every 5 minutes or so. I said it sounded like an awning slamming shut, over and over and when Bill investigated that is exactly what it was. He went over to see if he could help.


They have a Safari Serengeti a year older than Doug’s and they couldn’t seem to get the awning to go in properly. It took a few tries and Bill’s assistance to close it tight. The winds have been increasing all afternoon so no one wants their awnings left out. This has been a good day. Rain is in the forecast for tomorrow so I went out to put the chairs away just in case it came sooner than later. I didn’t realize that Bill had already taken care of that.

Thank you for stopping by! If you wish to leave a comment, I’d love that.

Posted by Patsy Irene (Chillin' with Patsy) at 9:14 PM