The Ridge - Home
Wednesday, Mar. 25th brings Day 5 of our full quarantine. We could have, but didn’t count Friday since it was mid-afternoon when we crossed. This is a pretty darn nice place to be isolated, with neighbours visible in the distance, we have all the comforts of home right here in the Suite and around us. Help, if we ever needed anything, is just a phone call away and that is piece de resistance right there.

We were both happy to see the sun burst through the clouds this morning, although sleeping in until 7:30, I missed its awakening. The sky is promising to be mostly blue today and temperatures rising to a mild 8C/46F. We’ll take it! There are some winds but it is not expected to get too gusty so I’m hoping to get a bit of cleanup done outside after lunch.

After my tea, I slipped on my hoody, windbreaker, gloves and boots and went for a walk. I’m anxious to go beyond our gate but don’t want to upset anyone so for the time being I will stick to the laneway, down the road to our field entrance and back. I had a form to fill out for the continuation of Mom’s VA benefits so filled that out and dropped it in our mailbox. Flag up! 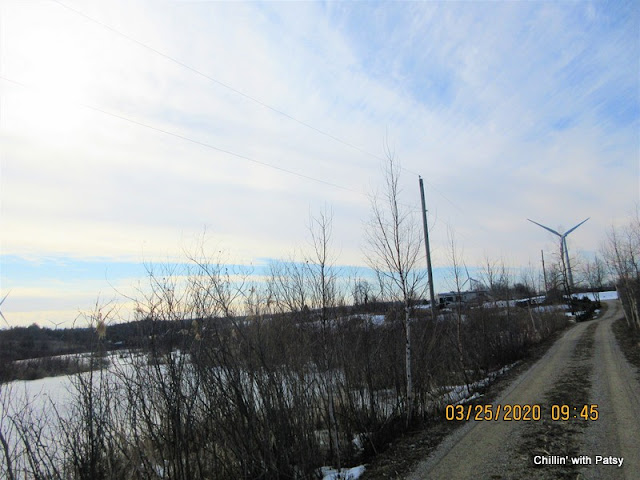 Back inside, I finished reading blogs and playing my 5 online Scrabble games. I debated starting a Cribbage game but I think it is instant play which doesn’t work for me or anyone else, really. Bill had a second coffee with a couple of Nutter Butters and I had some cottage cheese (this Shamrock brand is so good!) with a coffee so there was no rush to eat our brunch until noon.

Bill went out with his camera to take pictures for his blog post and I did a few more rows on my ‘much rippited’ sweater. 😊 At noon, we had omelettes for lunch and then both of us headed outside. Bill first attached our “Richards Way” sign on the mailbox post and then got our leaf rake out for me. There aren’t a ton of trees on the acreage but enough that the small twigs and branches from winter winds make a mess.

I started on the east hill beside the corral and began making piles. I didn’t need my hoody and my windbreaker so layered down and removed my neck wrap. I knew enough to go slow as I get winded quickly so took a lot of breaks. 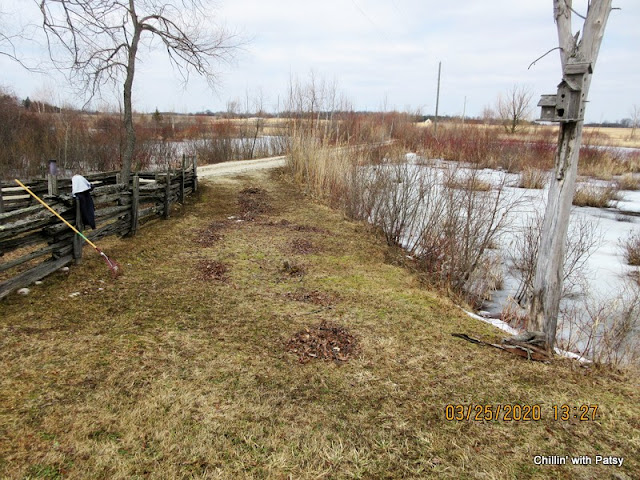 I moved to the west side of the corral, along the lane, and then inside around the big plop of snow in the middle. It was cooling down now that the sun had disappeared so we agreed that I’d leave the piles for Friday to pick up. We are expecting rain tomorrow, they won’t go anywhere.

Bill brought his chainsaw out and cut a dead branch on a tree in the corral that has been pestering me for a couple of summers. Why it won’t break off in the winds, I’ll never know. Now it is gone. We also have a dead tree in the middle of our brush pile that every year gets covered in vines and we keep saying that it has to come down. Why it survives, we think, is from the vines holding it in place. Even dead they have quite a grip.

So, he made a couple of cuts on each side of one of the two trunks and it seemed to waiver. That was when I made an appearance as I wanted to keep an eye on what was happening. Now is not the time for an emergency hospital trip. He was being careful in his progress and we thought maybe a rope could pull it over from a safe distance. It took a few tries and a few video clips for our own entertainment, but it finally came down. There is still a part of it left for another day.

We were inside by 2:45 and at 3 I made us each a Miami Vice. It was Happy Hour! I wanted to share so sent a picture of our glasses to Kim, Pat and Donna. We deserved a nice treat today after working so hard! I read and although Bill tried, he had to close the book for a snooze. Next thing I knew, I had to do the same thing. We were both awake by 5 and of course, our NCIS reruns were on.

We were going to bbq burgers and have a salad for supper but it had clouded over and I offered Bill chili on toast. We still had a couple of containers in the fridge. It tasted very good, as usual, and it was an easy cleanup afterwards.

While I was sitting working on my blog, Marilynne called Bill to check in on us. She wants to make sure we have enough wholesome food to eat and we assured her that we are well stocked and about the offers we have to get us what we need. It is nice of her to be concerned.

The day was a great one. We accomplished a few things outside around the Ridge. The snow is melting more and more each day and the temperature is rising. It got to 7C/44F and that is pretty nice in our books. We know it could be a lot worse. 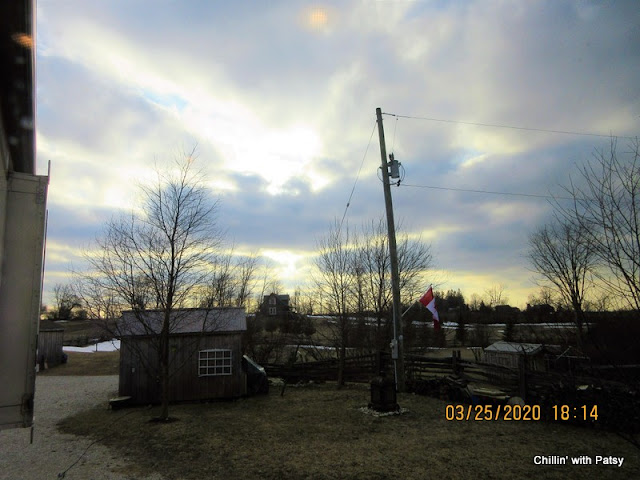 I hope things are going well in your world whether quarantined because you’ve been away or just self-isolating to stay healthy. We’ll get through this!

Thank you for your virtual visit!