On Sunday, May 13th, I rose to a sunny Mother’s Day at 6:30. I’d been tossing and turning since 5:30. A new bout of shingles on my waistline yesterday makes certain positions uncomfortable. They will be better by this afternoon. I slipped out of bed without waking Bill but no sooner was I downstairs making my tea and he went from sleeping noises to sitting up on the side of the bed. He wakes up quickly. 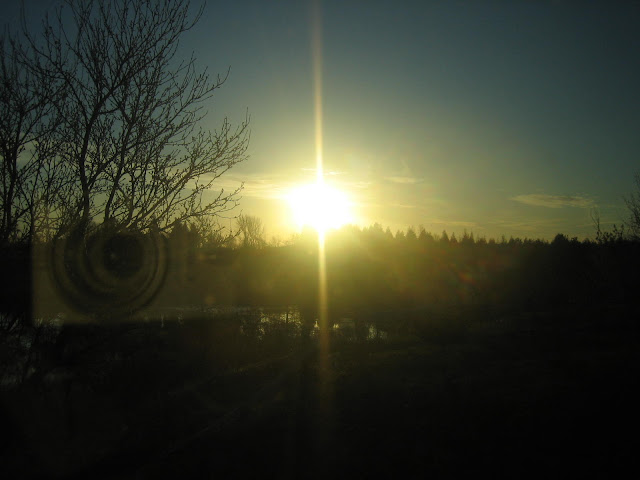 We had our drinks together and he read blogs while I finished mine from yesterday. I was not in the proper state of mind last night to do my pictures. With my exhaustion, we’d added a Caesar before dinner while sitting outside at the fire so you get the picture. It was very good though, we haven’t had one in a while. I was in bed by 10, wasting no time at all dropping off to sleep.

Bill went outside and started more puttering. There are always things to do up here on The Ridge, some smaller than others so there is really no ‘end’ to the things we can get in to. While he worked in the storage shed, I put my garden gloves on and went about weeding some more and then transplanting some of my irises. They don’t need too much attention, they root so easily in very little earth.

Around 10, Bill said he was feeling peckish so I went inside and made breakfast. While cooking, my daughter, Bridgette, made her obligatory phone call to wish me a Happy Mother’s Day. Whether I’ll hear from my son is always a guess and if he misses, there will be some reason. I never expect it anymore and often am surprised. After dishes, he went back out I moved around the property doing odd things.

I have 2 ‘knick-knack’ type shelves on the outside of the bunky and always put the stuff away for the winter. I pulled the 2 buckets of ‘garden things’ (pretty official name, eh?) and took care of that. I rehung my sunflower thermometer and re-stabilized the metal weather vane on the cedar post. Lots of little things like that got done but it wasn’t long before I decided that I was done for the day. It is my day, after all!


Around 1:30 we took a drive over to the Acreage to see Donna and Gerry. Bill had a satellite cable for them and we thought we’d say hello to their company. Donna’s 2 girls and 4 grandchildren were out to spend the day with them. We had no intention of staying very long but someone twisted our arms (ha ha) and Bill had a beer before getting involved in helping Gerry with a few trailer things.

Well, they couldn’t get the satellite to work so it was after the girls and families left at 3:15 that Bill drove Clemson and I home to pick up his toolkit. He went back and I lounged in the sun with my book.

It was around 4:45 when he returned but he felt good that he was able to help them get things working. While Bill was there and I was here, Donna was able to get some of her dishes washed and put away in the cupboards. I’m hoping they stay out there overnight to christen it. Wink wink, nudge nudge. Ha ha, at least they are having supper in it tonight.

Bill cleaned up the shed and put the garden tractor in for the night and then lit the barbecue for grilling. We had planned on strip steaks from the butchers for tonight’s supper so I got them ready while he cleaned the grill. I fried up the last of the leftover potatoes and a can of mushrooms. Yummy, it was such a great Mother’s Day meal! During the day today, I also heard from 2 of my step-daughters with good wishes on my special day. Thank you, Jessie and Krystal.

Once dishes were done I put my lounge chair and blanket away, closed the bunky and took a walk down the lane. No turtles on the log tonight, I wonder if something spooked them before I got there. This has been an awesome day from beginning to end. We watched a couple of episodes of The Voice as they counted down the contestants and set to record Madame Secretary at 10 pm. I doubted I’d be able to stay up.

I hope all of you Mom’s have had a great day too and you at least got supper cooked for you! Thank you for stopping in today. If you feel like leaving a comment, it would add to an already terrific day!