Taking of Care of Business First, Cleaning up a Garden, Planning a Project

On Wednesday, May 9th we were both up around 6:30 and Clemson actually got up with Bill today. So, I got up, made the bed without a little lump in it and joined them downstairs. It felt cooler inside, only about 62F but 54F outside so no point in turning the heater on. The sun had already popped in the eastern sky and would soon have the Suite warmed up nicely. Bill made my tea for me and we sat at our laptops.

As you know, I hadn’t finished a post yesterday and when I tried to download pictures and finish writing, something was moving really slow. My mouse was not co-operating so rather than get all worked up about it, I shut it down. We prepared ourselves to go to Hanover's Service Ontario this morning for opening at 9. Well, we left at 8:30ish and should have checked their opening time first. When we arrived, the sign said 10. Darn!
Bill had a project in his mind, wanting to make an outdoor rack for our kayaks for the summer, so we drove to Home Hardware before instead of after our 'business'. It was around 9:30 when we returned and parked in front of S.O. Knowing how busy these places get, we decided to sit on the steps so we would be first when they opened. I’d picked up a copy of the London Free Press crossword puzzle so we sat and worked on that together. 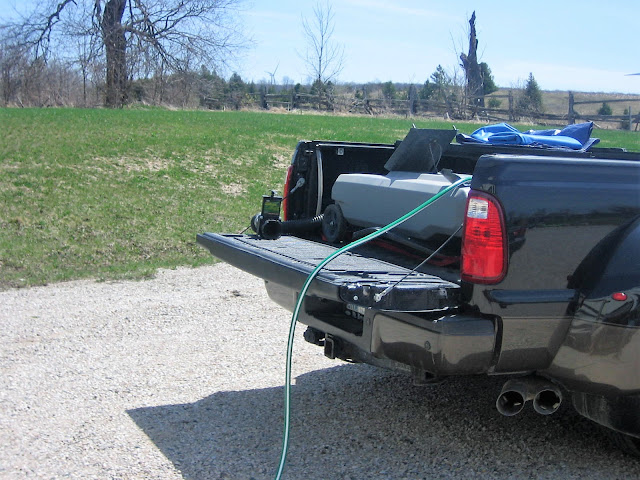 At 9:45, an employee opened the door and invited us in. That’s a switch! How nice to take us early! We needed to have the P.O. box removed, which remained on our vehicle registrations after us making the change to our driver’s licenses April of 2017. No one knows why it still showed up but regardless, now the truck, car and 2 trailers are updated. Bill made another change to his license and we were out of there in the fastest, smoothest 5 minutes ever. Good thing, there were 5 people lined up behind us and it still wasn't 10 o'clock.

At Home Hardware, Bill was able to get the few pieces of lumber and bolts required and also picked up a 5/8” garden hose in a 50’ length. Our black tank is near full so we want to use the macerator we bought down south this past winter. This didn’t quite go as planned simply because of using numerous hoses and one only being a 1/2" diameter but by placing the blue boy in the truck bed, he managed to dump our black and gray tanks. Sometimes, you need to work at things and make adjustments until it works right for you.

Before we came home, we stopped at Durham’s Country Corner Café for breakfast. Scrambled eggs, sausage and coin fries filled us up for under $20. It was delicious and no clean up! Usually it is so crowded in there but at 10:30, our timing was right. Then we drove home and changed into our work grubs. The day was young and the weather was wonderful for working in. There was a wind which kept us cool and bugs away.

I couldn’t get over the amount of bug spatters on the Toyota windshield from our drive home last night so promised Bill that I would wash it today. He’d just finished washing the tire rims and then replaced the hub caps on Black Beauty so I used the wash mitt and sudsy water to take care of the mess on the car. I noticed that the license plate was covered and the lower front panel. Yeuch! Many critters gave their lives, which means fewer to buzz around us this summer. Now it is shining clean, ready for the next trip.


While Bill went to work with the lumber and because Clemson wanted to be outside with us, I pulled a section of bone marrow out of the freezer for him. He doesn’t chomp on these the way we wish he would (to clean his teeth) but with encouragement, he will eat the good stuff and work away at any fat particles on the outside of the bone. I had to get right down close to capture his intensity today. I left him to it and went up on the hill to weed my small hosta garden. I didn't think it would take long but an hour and a half later, I got my results. Now, it looks better too and things are starting to show promise.
At 3:30 we both called it quits for the day. Bill went inside with Clemson and I took my book out to read in the sun. This one certainly isn’t a page turner, like the detective stories are but it is a good read and I’m enjoying it. At one point, I went for a walk down the lane to try and capture the turtles on the log with my camera. Cutting across the field, I’m happy to show you yet another view of the pond. The little Yertles were out and weren't as skittish today, more remaining in their positions.

The field out front is still soft near the water but I had on my clogs so I wasn’t getting any shoes wet. I walked out on the grass along the roadway and back up the lane. The wind has really picked up today but at 77F/25C it was a blessing.

The clouds have been kept at bay maybe because of the winds and we have had much more sun than we’d expected from the forecast. I see that my shirtless hubby has some sunburn on his back from working outside. Nice to get some colour on his upper torso. Down south, he seldom takes his shirt off.


Back inside at 4:30, Clemson was dozing and didn’t look for his supper until 10 after 5. Figure that out, we can't. Tonight, for supper, I’m making fish and hash browns and have made up a grocery list for Bill for Costco when next he goes to London. Looks like a warm night tonight for sleeping, only dropping to 13C/55F and once we get through a couple of cooler nights over the next few days, I think we’re in the clear for warmth. We should be able to put the heater away on the weekend. Yay!

Wednesday night tv doesn’t turn our crank so we were happy that we had the finale of NCIS plus the Madame Secretary episode from Sunday night recorded on our PVR. We’ve known for quite a while that it was Abby Shuito’s last episode on NCIS so I wasn’t surprised when my eyes were leaking during the last 10 minutes. I just didn’t know HOW she was leaving. Anyway, it was a very good one. It will be interesting to see who they get to replace her. It won't be the same but we say that when any of the main characters leave a show.

Bill had previously recorded Meatloaf: A Bat out of Hell so I managed to watch 30 minutes of that before I had to go to bed at 10 and will watch the last hour at another time. We’ve had a good day! When Bill’s project is completed, I will include those pictures. I keep promising he’ll write about stuff but I’m not sure when he’ll settle down to that. Such a busy guy!

Thanks for taking the time to read today. It is always a treat when you leave a comment.
Posted by Patsy Irene (Chillin' with Patsy) at 6:17 AM