Assessing and Cleaning Up Damage, Calm After the Storm, Clothing Fun, Pebbles

On Saturday, May 5th we were both moving and up out of bed by 6:30. With a tea and coffee at our side we read blogs and saw or heard about no major damage among our blogger friends. That is great news. The damage we experienced was limited to small material things so also came off lucky. Bill went out to gather the metal from our table so I joined him for a few minutes to walk around with him.

The air at 44F/6.6C was chilly but quickly warming up and by 7:30 already 50F/10C. So nice to see the sun and pretty white scattered fluffy clouds. That is a lot of adjectives for clouds but that is the kind of day I’m feeling, full of adjectives. Last afternoon and evening was a bit frightful, I will admit, the worst we’ve experienced up here on The Ridge but we held tight and came out unscathed. We were prepared to vacate if we had to but I’m glad it didn’t come to that.

Bill went up on the roof and discovered a screw was missing from one of our solar panels. We’d heard it rattling at one point but that screw could have been lost a long time ago. Clemson is still in bed so I got dressed and went out to rake up the glass. I wanted to rake the grass in that area anyway, so it killed two birds with one stone as the saying goes. It wasn’t as bad as I thought and filled two grocery bags. Any pieces that I may have missed were so tiny that they just got raked over the edge. 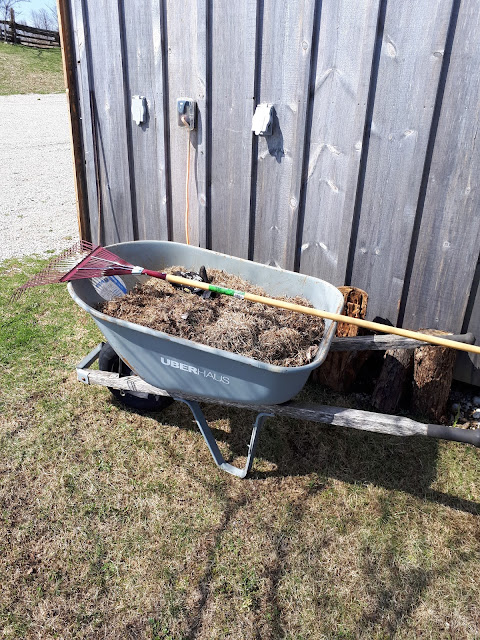 Bill talked to Gerry and they are meeting at the Acreage today to attack some trees so he went inside to get cleaned up and grab some cereal. When I finished I went in and emptied my kitchen compost into the outside composter. First time it has been fed since October! “Thank you” said Mr. Big Black Bin. Bill turned our inverter on and unplugged us from power. We were so fortunate that we didn’t lose power through all that yesterday like so many others did. Especially, since we didn’t have enough sun throughout the afternoon to sustain the batteries. 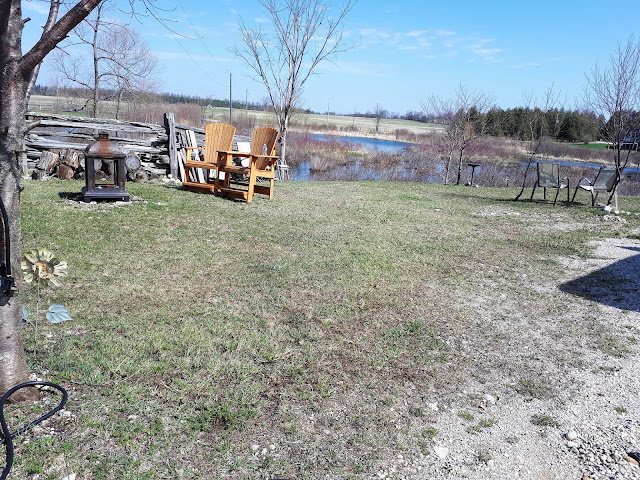 I don’t have to leave the Ridge until noon hour so grabbed a banana and continued to work on the lawn. It makes such a difference in the grass and easy to see why we should rake in the spring. I honestly don’t think I ever did that when we had our small property at the house. The only time I raked was to remove leaves or twigs. I guess at that time, I wasn’t looking for things to do after working all day and as long as our grass was cut and trimmed we were happy.

I’ve never had strong upper arms so raking tires me out quickly. I’d do one section and rest, etc. so it would take me longer than probably most others. Around 10:00 Bill had loaded the truck with the chain saw, our old generator and whatever else he needed to cut trees with. I suggested he take the small cooler with drinks and put some macaroons in for a snack. He was gone by 10:15 over to the Acreage, just down two county side roads.

I finished raking and loading the wheelbarrow and although I had no intention of showering today, after yesterdays, I was so ‘glowy’ (haha) from my efforts that one was definitely in order. The front yard looks better. I loaded the Toyota with the huge bag of clothes, boots, purses and belts, my food and finally my camera to capture special moments of the day. I was on the road by 12 noon and picked Pat up in Durham soon after. 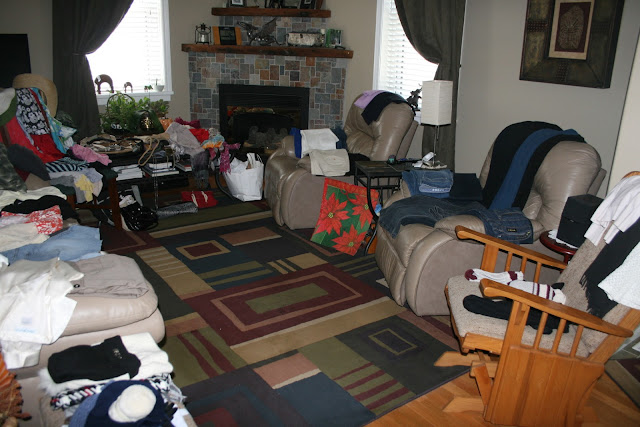 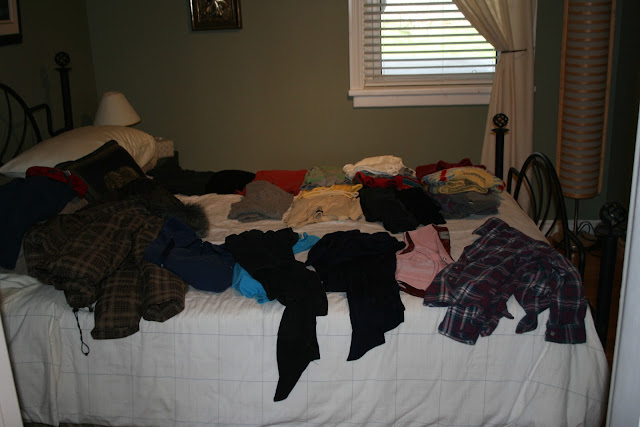 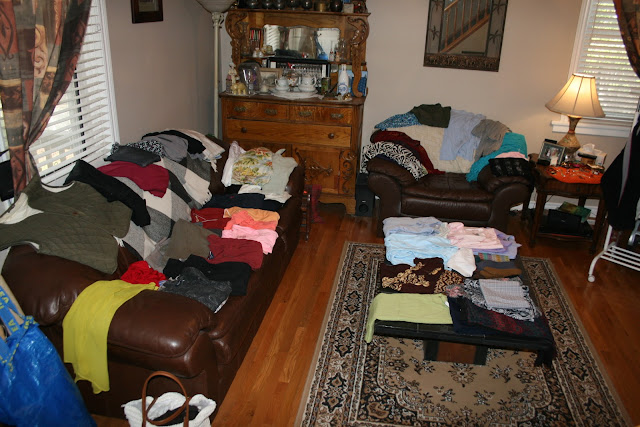 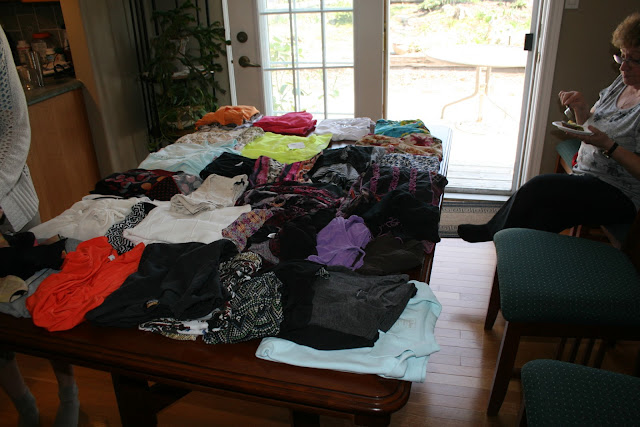 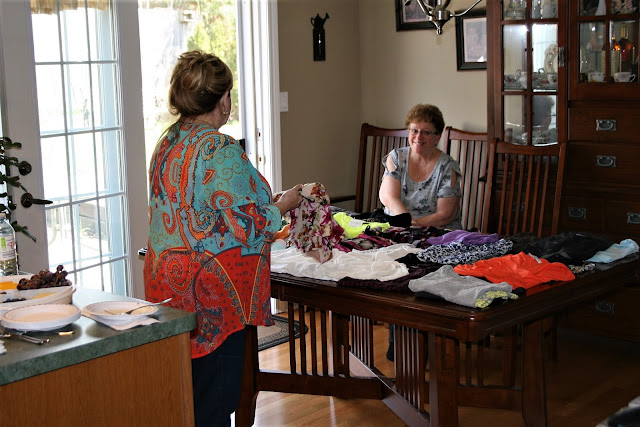 When we got to Donna’s in Hanover, Michelle was already there with her little red car tucked up behind Donna’s in the driveway. I chose to take the ‘preferred parking’ (as M. called it). Michelle is one of Donna’s closest friends and was her Maid of Honor at their wedding. It was great to see her smiling face again. There were already quite a lot of clothes spread from the dining table to the sitting room, the living room and the downstairs bedroom. It was very well organized.

Pat and I added our offerings to the piles and before long Gayle, our sister, joined us, Joanne, my niece, and two of Donna’s sister-in-laws arrived. With a total of 8 and donations from a couple of others who couldn’t come, we had no shortage of clothing to choose from. It was a great day all around. Donna had fruit, cheese, taco dip and spinach quiche as well with apple cider, water, coffee or tea to drink.

It was around 5 when we started bagging up the remaining clothes and everyone left with new selections and happy faces. I, for one, left with much less than I came with and that is always the goal. I dropped Pat off at home and carried on home to feed Clemson. Bill returned in Black Beauty about 10 minutes later and we cleaned up before hopping in the car again. I drove us over to the Acreage to wait with Gerry and Mike for the girls to return. It was nice to see Mike again too.

When Michelle drove in we said goodbye to Mike and went to Pebbles for dinner. It totally wasn’t necessary, but Donna and Gerry treated us all to the buffet. I had a full plate full, mostly of meat but some dressing, turnip and mashed potatoes as well. For dessert, I had a piece of heaven-sent chocolate peanut butter cream pie. Oh my!

We all had coupons from the local flyers for a free 1/4 lb. of fudge or jar of jam so after checking out, we made our choices from a large selection and parted ways. Bill and I were happy to be home after a very fulfilling day and watched tv for an hour before hitting the sack around 9:30. That is rare that Bill goes so early but between the hard work and the 3 beer he had at the Acreage, he was done for.

We had a great day here and around home and I hope you did too. It was an absolutely gorgeous day for whatever you wanted to get into, with sunny skies and 23C/73F.

Thank you for taking the time to stop by today for a read. I love hearing from you if you wish to leave a comment!

Posted by Patsy Irene (Chillin' with Patsy) at 6:12 AM