On Wednesday, May 16th I was awake at 6 and up out of bed to let Clemson out 15 minutes later. When we came back to bed, he went through his performance of scratching the duvet. I’ve come to understand this as a request to come under the covers, so when I asked him, he did just that. I didn’t think I’d go back to sleep and I was right. I got up at 6:30 and Bill and I chatted about this new day.

After making my tea, I finished my post from yesterday and sent it off to Blogger. The sun was gorgeous, no clouds in the blue sky and the temperature was a pleasant 45F/8C. Once my tea was gone, I got dressed and with trowel, bag and gloves in hand, went for a walk. I was on a mission this morning. Just after turning onto Baptist Church Road I found a nice ‘natural’ walking stick (not that I need one but didn’t bring mine) so used it.

Taking advice from our friend, Nancy, I decided to go down the big hill and then back up using her technique. Before doing that, the road was free of traffic at 8 am so I slipped off to the edge of the bush and dug up some Trillium for replanting. When I heard a vehicle coming, I casually wandered along the ditch. It still feels odd digging up plants even along the roadside! I finished my task and decided to pick up garbage as well, do a good thing for my reward.

In the valley between the two steep hills is a driveway into a private property. Today the gate was open but I would never venture in. This place has no house, it is a storage place for trailers and there is a corral for horses. The horses are beautiful, so Nancy these pictures are for you as a thank you! The hill was a breeze! I can’t believe what a difference that makes, I’ve always strode long coming up a hill.

By the time I returned, I had gathered a full bag of garbage on top of my plants so I hoped they were okay.  We are going to the dump station tomorrow anyway so will add the junk to that pile, recycle the cans and return the 2 beer cans for the .10 when I return other bottles. Back inside, I opted for a bottle of water instead of a second tea at 9. The temperature has now risen to 55F/13C.

I don’t know if I mentioned that when I was hanging clothes the other day, I was bitten by what I assume was a black fly. We call them ‘no see-ums’ and they are a nuisance this time of year for about a week or so. Well, he got me good before I felt it and reached up to schmuck him. Teeny tiny black smear on my finger is the only proof I had, until yesterday, however now the proof is a quarter size area. Because the mark is on my back near the shoulder, I can’t determine if that is what is so itchy. I can’t see it to eliminate shingles. That is my other thought, because it feels larger than a bite and bumpy akin to the virus.

I’ve never had shingles appear up there and was freaking thinking they were spreading so today I took a picture of it to view close up. Phew! It is a bug bite and funny as it sounds, I am relieved. I’ve had a few bouts of shingles right in a row for the last week, in 3 regular locations and didn’t want a 4th spot to become norm. Last night I had to put an icepack on the spot before and after I went to bed. It eased it enough to allow sleep to take over.

Speaking of shingles, I’m running low on my tablets so called the I.D.A. here in town about the cost of 30 more. Well, at $108, I think this gal is going to see if she can suffer through. The pills don’t completely stop them from popping out anyway, so I’ll see how frequent the spells are and how much worse they are without the meds. In Mexico last winter, a sister med to what I take is $4.99/50 and I should have stocked up. I wasn’t even close to running out at that time, darn.

After cleaning up a bit, I drove into Durham and took the case of beer bottles, an empty Rum bottle and the 2 beer cans that I found this morning into the Beer Store. I’m not sure exactly what refund I got but I put it towards a case of 6 Bud Light bottles. I couldn’t reach Bill to see what else I should be buying so just got those for now so that I have a light beer for my margaritas. We’ll be in town tomorrow and can get Rum etc.

From there, I drove to FS Co-op and picked out some healthy-looking vegetable plants. The price is right at $1.49 for 4 plants so I’ll nurture them in their pots for a few days until I can get the garden area tilled. We’ve asked Donna if we can borrow her rotor tiller when John is done using it. Last year I dug the whole thing by hand with the shovel and I can’t/won't do that again.

I needed to pick up a couple of birthday cards so got those and then before leaving the area, I drove to the dam at McGowan Falls. I haven’t been there yet this spring and I always love watching the water. I’m never keen on walking across the steel grated walkway so instead I sat on the bench. I don’t know, I’m afraid I’ll drop something in maybe? It is a pretty dam and I captured a video hoping to show it to you on here. I'm sorry that it would not rotate for me. 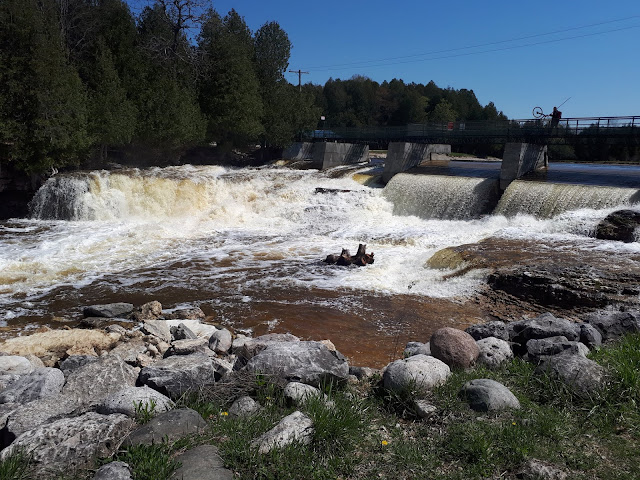 Sitting there on the bench, by myself, is a great place to reflect on just how blessed I am and remind myself how grateful I should be every day. This is a great life and I can think of nothing I’d rather be doing. Feeling pretty good with everything, even with the bug bites and the shingles, I drove back to the Ridge with the windows partly open.

Back home I planted my 5 ‘stolen’ emblems up on the hill. Considering where they grow naturally, I knew they wouldn’t want full sun so I found an area at the base of a sprawly little tree that was easy to dig and yet always a nuisance to keep cut. Problem solved on both accounts! They went into the ground and stood semi-tall when I watered them. Fingers crossed that they will root and bring me hours, days, years of pleasure! Prosper beautiful white flowers!

I needed to eat. Bill’s frequent comment. He goes and goes and goes with no mention of food and then all of a sudden, he says “I need to eat”. I always chuckle because it sounds as if he has been deprived. Well, that is how I feel right now, at noon hour. It is my own fault, as it is his, that I didn’t stop sooner to grab a bite. So, inside I warmed up a partial bowl of soup, cut some cheddar and had some walnuts.

Feeling better, I sat outside trying to figure out what to get into it next. I didn’t want to overdo it just because it is so gorgeous out and there are so many things that need attention. Moderation is the key or I will pay for it. I did a bit of raking on the berm behind us but that was a lost cause. Hard work for little gain so I put the rake away and decided to move some of the rocks for Bill.

He’d suggested that I could move them into a hollow we created when we pulled some logs out. I did what I could, digging some out of the dirt because they stuck up so a mower couldn’t go over them. In the end, I just made piles and, in the morning, I can finish moving them. It didn’t make sense to load the wheelbarrow, cart them 10’ and dump them. I’d rather move them the short distance one by one or two by two, depending on their size.

I had my bug hat on, thank goodness! They were buzzing around my head like crazy. I don’t work as long if I’ve bogged myself down in the clothes they tell you to wear when working, so sprayed my arms and back area liberally with bug spray. I smelled like a can of Off but it seems to have worked. It was time to quit so I snapped this selfie, lovely, eh? And walked down the lane to get the mail. More flyers. When I sat in the shade to read them, for some reason the bugs thought I was there just for them to pester so I quickly moved inside.

Clemson had a piddle and then watched me eat a vanilla ice cream cone down to the last inch. He knew from past experience that he would get some too if he just waited and watched. After his treat, he had a drink and went back to bed. What a goof! Speaking of which, I’m going to take my water and sit in my chair too and try and read more of my new book Rules of Prey by John Sandford. Started out like a good one.

I’m sure I dozed but not for long, just a few minutes was enough to keep me going for the rest of the afternoon. It was after 5:15 when Clemson came down from upstairs for his supper. After feeding him, I began my own since I’d heard that Bill wouldn’t be here to eat with me. It isn’t surprising or disappointing to me anymore that his days with just one orientation in the morning turns into a full day. It is what it is and as long as he clocks in and clocks out, I see him when I see him. 😊

Tonight, I refried my cooked liver from the freezer for a few minutes in butter with onions and tomatoes. On the side, I steamed cauliflower and served with butter, salt and pepper, it was a wonderful meal. The sky is still clear blue, fading to a different shade though and the sun is merely ‘thinking’ about saying goodnight. I took one more walk down the lane after checking out the weather forecast. It looks pretty nice and the overnight temps appear to be improving. 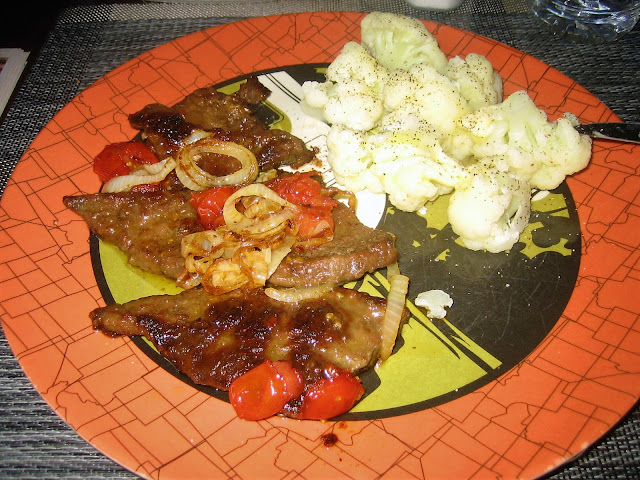 It was 7:30ish when Bill drove up the lane and we are always happy to see him home, safe and sound. By the time he unloads the car with his suitcase and cooler, he is pretty tired. I hope you’ve had a good day enjoying this wonderful spring weather.

Thanks for stopping in. All comments will be read and replied to.