I woke up around 5:30 on Monday, May 7th, my niece, Joanne’s birthday. I didn’t get up. It was still on the dark side of the morning and easily dropped off until around 6:15 I heard something and realized it was Bill downstairs making his coffee. Stretching languidly (is there any other way to stretch?) like a feline and legs up and down, this way and that, I rose at 6:30.

Bill could hear me so he made my tea as I made my half of the bed. That little lump on Bill’s side was almost invisible but I knew our furry little guy was under there. We read blog posts and comments and then around 7ish I sorted the laundry while Bill got cleaned up. We had a lot of dirty clothes from our past week working in the yard so with 3 loads already, I decided to do the sheets another day, by themselves. I only had so much room on the umbrella clothesline.

Black Beauty loaded with laundry, we drove to Durham and filled the washers. It isn’t very nice to say but we both inwardly groaned when we met up with the same fellow who was there last Monday. Nice, personable guy but one of those that don’t stop talking to you. As soon as we walked in he was there and trying to show Bill pictures of his dog on his cell phone. LOL, Bill and I were loading the washer!

We would have stayed inside waiting, normally, but that was enough for us to go outside for a walk around the block and then sit in the truck until our wash was done. Maybe he got the hint, but it doesn’t matter. I will now avoid Monday mornings for doing laundry. That sounds awful and we don’t mind conversation but he was annoyingly persistent. After 30 minutes we put the damp clothing in the truck and drove to Rob and Pat’s.


Bill had made arrangements to borrow their utility trailer to take our scrap metal to the ‘dump’. Well, scrap metal dealers, actually, in Flesherton, 15 minutes from home. They are quoted as only giving you .05 per pound where Scone (45 min. away) gives you .10 per pound. For the fuel mileage, and a possible two trips, we opted for the closer drive. Gerry came to help load and I had to make myself scarce, hanging clothes instead of getting in the way.

At 10, they had a full load, from my vantage point and I was almost finished my chore at the same time. I did a bit of weeding before coming inside to make another cup of tea. This is a gorgeous day for anything you want to do outside. At 55F/13C it wasn’t too hot but perfect for what we needed to do. I did stay inside to drink my tea though while I started this post and then placed a few ads on Kijiji. I can only hope things sell but if not, we’ve heard of ‘someone’ having a garage sale so can add them to that.

The boys returned at 10:50 for their second load up and were on there way once more at 11:15. When they returned just before 12 noon, I went out to see what the ‘reward’ was for donating scrap. Turns out it all amounted to about 1500 lbs. so Bill came home with just under $80 in his pocket. They were dirty and pretty worn out so when Gerry texted Donna, who was just leaving Mom, Bill offered that they stay here for lunch. I thought that was a good way to thank Gerry for his hard work.

I began making up some bacon and eggs, on toast if they chose, and Donna joined me inside to fill me in on her visit. That hit the spot and Bill and I cleaned the dishes up before we headed outside to say goodbye. Donna had some hostas to plant at the Acreage. Before taking Rob’s utility trailer back to him, we used it to gather the balance of the trimmings down the lane. It took one big load and then 2 smaller loads in our small wagon on the back of the garden tractor. It already looks so much better on the west side with more trimming yet to do.

We were pretty tired too so time to wind down for the day. When Bill took the trailer back into Durham, I gathered the dry clothes off the line and folded them. They smell nice. The timing was perfect. Bill drove in just as I took the last pants off the line and brought them inside. I wasn’t looking forward to sitting in front of the tv, knowing I’d probably fall asleep, so took my book outside and read in the sun.

I had a call about my food processor and the lady wanted to come and pick it up right away. At 4:30 they arrived but she was disappointed that it was smaller than what she expected. Not my fault, she said she should have asked how many amps it was on the phone. Oh well, I could almost feel that cash in my pocket! That would have been pretty awesome to sell something that quickly.

When they left, I returned to my seating spot outside and Clemson joined me for a while. He and I took a walk down the lane to the mailbox and back even though Bill and Gerry had already collected the mail earlier. There was no hesitation on those four little paws today as he trotted down ahead of me. He had no patience for me as I stopped to snap pictures of the turtle reunion over there on the log.

After the walk, we came inside and watched some of Highway Thru Hell with Bill. I also checked out the inside of my eyelids and all is well in there, fyi. When you’re tired and need a 5-minute nap there is no point fighting it. That is all I needed and was soon refreshed again.
Bill lit the barbecue around 6 and we were eating messy bacon cheeseburgers by 6:30. I usually have mine in a lettuce ‘bun’ but we had two buns left that we’ve had in the freezer for a while. They needed to be eaten up so I also had mine on a regular bun. Good thing they are gone, they fell apart and made the juicy burger even messier! 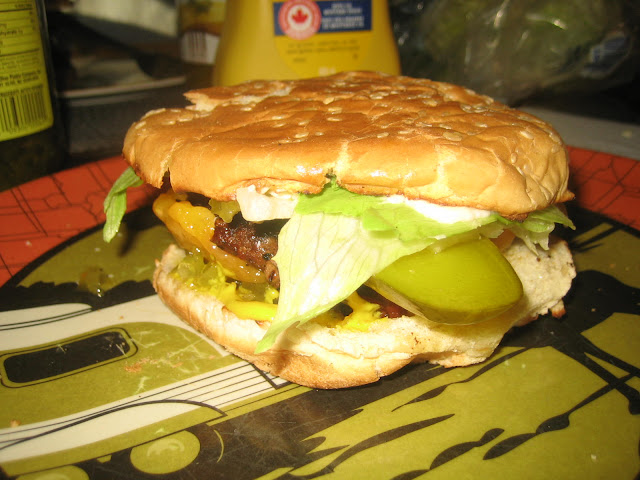 We took care of the dishes again and decided to have our showers tonight instead of rushing in the morning. I sat and finished my post, watching the ball of sun getting geared up to settle in the west.

Before I sign this off, I wanted to share with you the project I made today. I had this glass jar with a stopper top that was going to go in recycling or to the second-hand shop in town. But wait! I needed a jar very similar for something.

This has been a great day and the temperature rose to a beautiful 70F/21C before it began declining at 6 pm. I hope you have had a wonderful day too.

Thank you for stopping by today. I love to hear from you if you care to leave a comment!