It was 5 minutes before 6 when I first woke up on Friday, May 11th and my first thought was of my daughter. Today, Bridgette adds another year to her 40+ but I won’t let the cat out of the bag because it isn’t one of those life-changing 20’s, 30’s, 40’s etc
Bridgette isn’t the only one celebrating a birthday. It just so happens that Bill’s youngest daughter, Jessica (Jess), was born on the same day, only 14 years later.

Happy Birthday to both of our very special daughters! Have fun whatever you do and enjoy the celebrations. Hopefully, the Musician and the Fiancé spoil you. 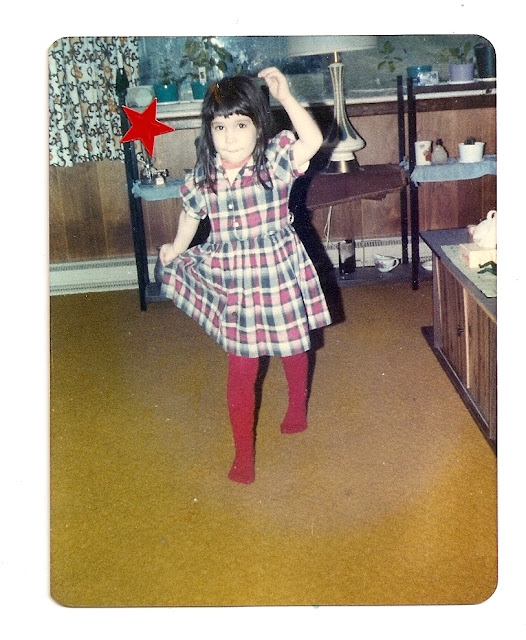 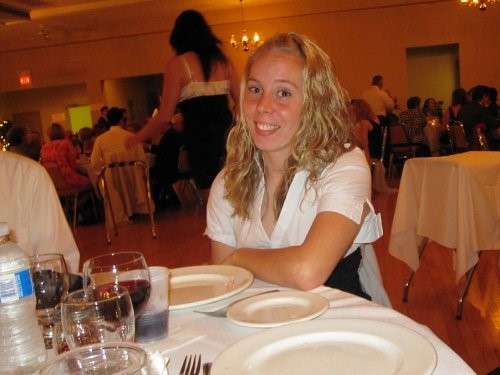 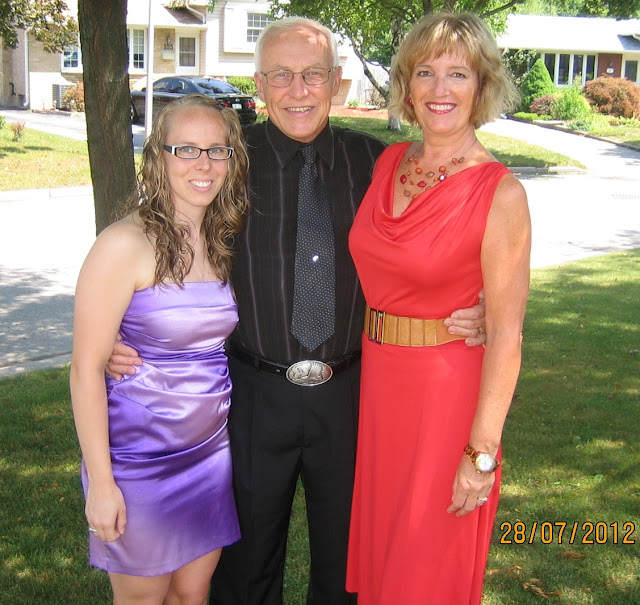 Clemson was in his sweater and slept on top of the covers, but when I moved and lifted them, he slipped under and went back to sleep. So did I, at least until closer to 7 when I got up. Once I got my tea started Bill and I chatted before I delved into reading the blog posts from yesterday.

The sun was shining this morning, nice to see while it lasted. I had left our heater on last night but just at the lowest setting so it was registering 60F/16C. I turned it up half a notch to warm it to 70F/21C.

Everyone in our neck of the woods is hoping and praying for a steady change in the weather, wanting the warmth to come and stay. However, Don, a reader in Oklahoma is wishing for the opposite, experiencing 100F already! Looks like a cool 54F/13C is all that is expected today with some sun and some clouds but then hopefully a little warmer each day.

Tomorrow doesn’t sound like the best day for our Alzheimer’s Walk but we’ll just have to bundle up, take an umbrella and walk fast! For the cause, right? I didn’t bust my butt getting donors this time and will pursue it even less as the years go on. It is the part I dislike the most, asking for money. Instead I would just like to focus on the walk but I know that defeats the purpose. If you are one of my donors, I heartily thank you.

I hopped in the shower and drove into Durham around 10:15 to see Mom. Today, Rockwood Terrace was providing a Mother’s Day Spa day for their residents. I figured they would offer it to Mom but she would likely decline. That’s where us daughters come in. When I arrived, she wasn’t in her room so I left her card on the dresser with the picture of her and I that she’d requested from a past visit.

As I was waiting to get on the elevator, one of the nurses was bringing my beautiful mother back up to her room. She was down at the spa but didn’t have a snack or drink or take part in any of the free services. That isn’t surprising but I turned her around and told her we were going back down to get her nails painted at least. She knew I meant it so smiled and agreed “they never get painted!”

There was a line up for manicures and all around the room ladies were getting makeup, massages and foot rubs. Couldn’t talk Mom into any of those things so we sat and waited for one of the 5 volunteers to take her. The young staff are so wonderful and came over and had Mom and I pose for a picture with feather boas and glasses. Too funny. I don’t have the one of both of us, but it will be on the wall at Rockwood for sure. 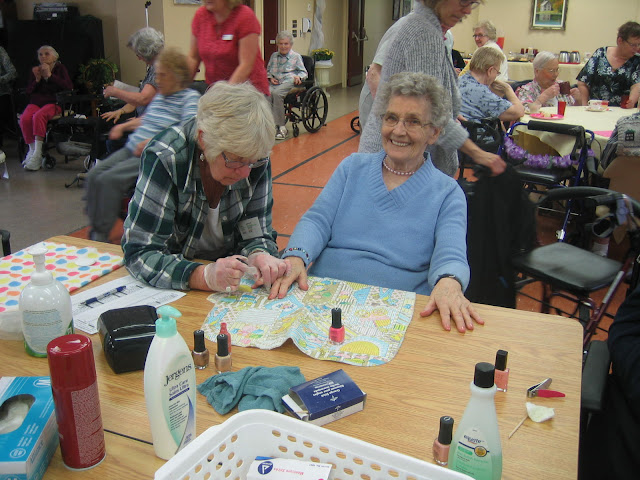 When it was Mom’s turn, she chose a pretty translucent rose shade and Pauline admired her beautiful nails to work with. After thanking her, Mom and I chose a small treat off the table of snacks and went to the front foyer to sit and eat it. It was 11:30 so there was no point in going back upstairs. There was a moment of confusion, where am I, do I live here, why can’t I remember funny things Daddy did? I distracted her as best I could and soon enough it was time for her lunch.

I left her with the usual hugs, kisses, oh and kisses for my man (4!) and waves all the way out the door. I spoke briefly to her ‘Legion man’ friend and Aunt Mary with her beautiful nails too before walking out to the truck. I had some donations for the second-hand store on Main St. so dropped those off before returning to the Suite. It has changed from sun to clouds but with no wind, the 49F/10C actually doesn’t feel bad at all.
I needed to eat something so tossed a boiled egg, some lettuce, black olives and turkey into a bowl with some Hellman’s. I had my second tea of the day too and it all went down and filled the gap in my tummy.

Today was a soup day, so I added some broth to a pork hock with carrots and onion. I’ll add mixed vegetables and barley in a couple of hours so I’ll have a nice pot for a few days. 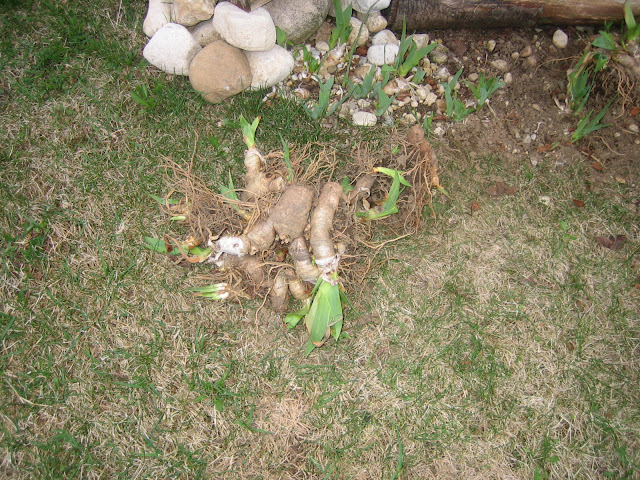 I sat in my chair and read for a little while, passing the time and once more fought off sleep. I know there is no judgement but I find I sleep good at night without an afternoon nap, why mess that up? Around 3 o’clock I went outside and transferred some of the sawdust shavings from the large overstuffed garbage bag into a couple of pails. If I had more pails, this would be a better way to store it. We use the shavings (sawdust) to keep odor down in the Restroom.

When I finished that, I had warmed up and put my work gloves on and pulled the grass growing around my irises. We’ve spread a lot of grass seed in this area by the outhouse but the wind has blown it to places I don’t want it growing. I dug up a pile of the plants too, it was looking overcrowded anyway. Irises grow so easy, I’ll find another spot for them. When I finished that I took a walk down the lane and down North Line to Baptist Church Road. Getting the kinks out of my back from the gardening at the same time. 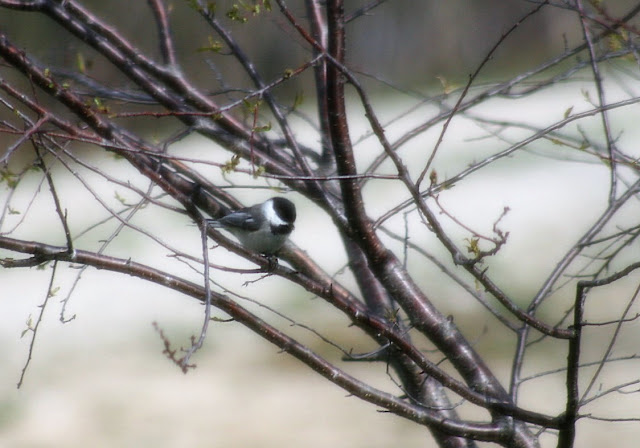 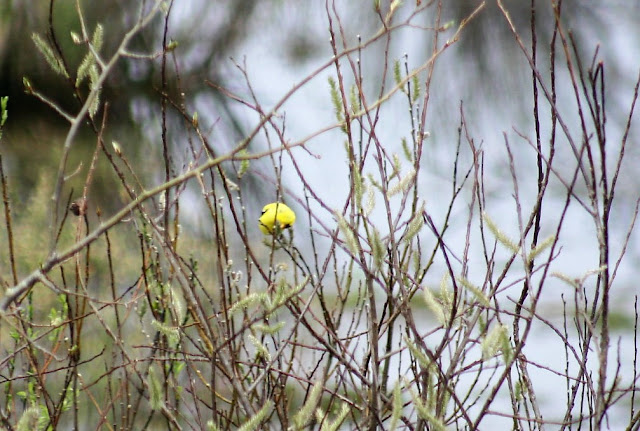 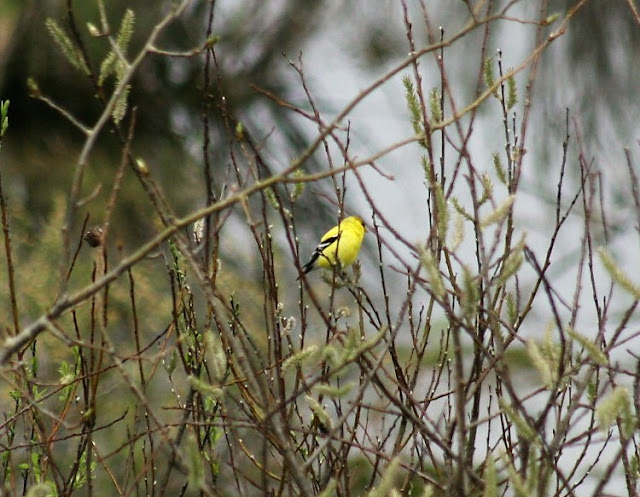 Clemson came outside with me for awhile but by then the clouds ruled the sky and the air turned cool again. We came inside to wait for Bill, you’ve probably guessed that he has been in London. He’ll be grabbing supper on his way home so I can eat my leftovers after all. I sat with the little pooch and read for a bit more.

My soup is coming along nicely although I’m disappointed that there isn’t much meat on the pork hocks that you buy. I do have the solution though. There is enough corned beef to add to the soup and that is exactly what it needs. I couldn’t believe that Clemson sat on my lap while I read right through his supper time and I was the one who actually moved first at 6:15 to get both our meals. Goodness, what’s got into him?
Clemson got fed first and then I reheated the soup after adding the meat. Just a bowl of that delicious goodness was enough for me tonight. Bill was stopping to see his Dad and his daughter, Krystal, on the way home tonight so I have a pretty good idea when to expect him. This has been a good day. I enjoyed my time with Mom and I hope my card and pictures put a smile on her face when she returned to her room.

My sweetie made it home safe and sound at 8:30. I hope yours has been a good day even though it has been mostly dull.

Thank you for stopping in and if you’d like to leave a comment, I’d love to read it.