Into Each Life, Rain Must Fall and Watching the Grass Grow, Revisiting Winter Photos

It was 5 when I first woke and I think that was when Bill first got up. He is quiet and I know I dropped off listening to the sound of the rain on the roof. Then it was around 6:45 when I got up and everything was quiet. Clem had been out and came back to bed. Not even one minute outside and he came back in soaked. Glad his hair is so short, it wouldn’t take long for him to dry off. It was a warm morning, 58F/15C but the steady light rain meant an inside morning at least.

The Suite needed a good cleaning. The woodwork needs to be dusted and the floors done. Bill plugged the Suite into power so I’ll get the vacuum out after Clemson gets up. He’s a sleepy head and on a day like this, I don’t blame him. There is no sunshine corner for him to curl up in. I had my cuppa and caught up on what our friends are up to on blogger. Bill and I chatted about his day and what he had on his agenda.

After I finished my creamy tea, I began dusting in the living room, moving to my left, window ledges, cupboard doors, coffee table, dining chairs, table and hutch. While doing that I noticed spots on cupboards and areas that get bumped and scratches or teeny nailheads are visible.

We’d purchased some Furniture Markers at some point while living in our sticks and bricks home and although the colours are not a perfect match, unless you are looking for it, you don’t notice the marks.

I moved to the bedroom and bathroom and finished the dusting job up there, then got the Windex out and did the mirrors including the mirrored closet and over-the-bed cupboard doors. Aah, much better. That was the easy part, next was the vacuuming. This is usually Bill’s job but I offered to take care of it today since we were plugged into power anyway. I know we can vacuum in full sun, unplugged, but who wants to do that inside on a sunny day?

So, once that was done, I felt that my chores were done for the day. I filed my fingernails next and then took the necessary time (how much time should it take to fully dry your nail polish?) to paint my nails. It seems they get dirty so fast from doing really nothing and that is the main reason I like to put some colour on them. If I can’t see the dirt, it doesn’t bother me as much. Plus, it tends to keep them protected from my nibbling.

When they were dry, (yah right), I still managed to touch one sitting here at the table, I put the polishes away and caught up on my daily post.

If I don’t write as the day goes, I easily lose track of what I did. It’ll be a pretty boring post anyway, unless we can at least get out this afternoon. After lunch, someone is coming to look at our gravity chairs and hopefully they will drive away with them. They know the lowest bargaining price so that part is taken care of.

At noon, I opted to have a hard-boiled egg, some cheddar and a small bowl of my corned beef & barley soup. Yum, I’m so pleased with it and have enough for at least 6 or 8 lunches.
The rain has been playing tag with itself all day, is that called Solitaire? It stopped around 8:30, started again at 11:30 and now at noon it has stopped again. I’m watching the clouds and looking forward to the clearing they were talking about.

The Sirius xm radio is playing wonderful music. I’m listening to the Bridge channel 032 today. Good tunes from 70’s and 80’s mostly, which certainly turns my crank! Who doesn’t like a station that plays all the tunes you know? After all, when was the last time YOU heard Lucky Man by Emerson, Lake and Palmer?

When my phone rang around 1:30, I answered, figuring it was the person coming for our chairs but as soon as I answered the line went dead. That’s weird. It looked like a local number so I assumed I’d see someone soon. I went out and opened the shed door since there was some blue sky once in a moment.

By 2, “Bill, the buyer” drove in and admitted to the phone call, lost service and also got lost trying to find us. He went to the wrong end of Baptist Church Road. Main thing is he arrived and quickly handed me the cash as soon as I showed him the chairs.

He was very happy to take them meaning he didn’t have to work on re-webbing his old ones. He got them at a good price and we are happy for our ‘profit’ too.

The sun was teasing ever since he left but I still didn’t trust the gray clouds that would make an appearance periodically so closed the storage shed doors again. When the clouds moved off, I went for a walk down the lane to gather the mail. It was just flyers but the walk is always good. After 4, when our 4-legged furry guy hinted at wanting supper, I took him down the lane for a walk as well. Trying my best to distract him, he has been pretty good lately. He stayed by my side today, once he caught up, instead of trotting ahead of me.

The task I found myself doing ever since lunch is going through the pictures that I took over the past winter. I had some labelling/tagging and compiling to do so it was a good day to do that. I really got caught up in it and hardly spent any time outside, even after the sun came out. But the good news is that I finished the job and can now move ahead with what I plan to do with them. 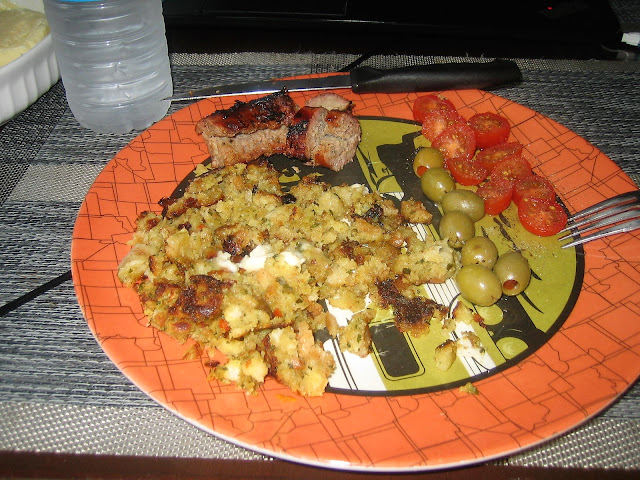 For supper, I fried up the leftover sausage along with the dressing. I cut up some little tomatoes and dished out some olives instead of a salad tonight. It tasted pretty good!

After dishes, I watched the News, the game shows and flipped to NCIS at 8 pm. Both Bill and I thought it was going to be a rerun, that last week’s episode was the season finale. We were wrong and tonight was ‘new’. Yay! we were both able to watch it.


My post is going to wait until the morning so I’m not advertising too much up here on the hill, if you get my drift. I have enjoyed the day even though Clemson and I were inside for the most part. I hope you enjoyed it from your neck of the woods.

Thanks for taking the time to stop in. I really appreciate your comment if you care to leave one.

Posted by Patsy Irene (Chillin' with Patsy) at 5:32 AM