Busy-Ness, Ran Out of Time = Another Late Posting, Birthday Fun

On Sunday, July 29th I woke up pumped for the day. I’d put a fair bit of thought over the past couple of weeks into this day. Rob’s birthday is on Wednesday and I wanted to see if we could celebrate a few days early, when more friends and family could attend. Pat was all for it and helped me put things together. Today, I think we were both up out of bed by 6:30 and had our tea and coffee while reading a few blog posts.
Bill got cleaned up and by 8 o’clock he had gone out and asked Rob if he wanted to join him for a drive to Princess Auto in Owen Sound. When Pr. Auto has a sale on, it is often worth the 40-minute drive to take advantage of it. The savings are that good. While there, Bill had also planned a stop at Home Depot for a couple of sheets of plywood as well. All things for the inner workings of his new workshop.

While they were gone, I first went for a walk down to the turbine entrance and back. What a beauty of a morning. When I returned after 2 1/2 miles, I cooked the ground beef and made up 2 pans of lasagna. I covered both with foil and set them aside for the day, until it was time to cook them for supper. That was my biggest obligation for the day other than making sure everyone was happy! That is never a challenge with this gang as they already have smiles on their faces. 😊

We met for Happy Hour at Rob and Pat’s and the conversation flowed. Bill and Sandra arrived, as did Donna and Gerry. George and Suzie had earlier decided to try Deb's Beer Margaritas with strawberry punch instead of lime juice. Once we were all present, they served us each up a glass to try. It was good for a summer drink but I prefer the lime for more of a magarita taste. Thanks guys!

While sitting at H.H. we had a surprise visit from Bill’s cousin, Peter and his wife, Linda. They were on their way from Peterborough to visit friends in Kincardine for a few days. Unfortunately, Bill missed earlier Linda's text but fortunately they took the chance and came anyway. We didn't recognize the Subaru coming into our area until Peter stepped out of the vehicle. What a great surprise! Jenny, their beautiful poodle happily explored the surrounding area while we caught up.

How nice to see them and even nicer that they feel they can just drop in. We both love that! Too soon they were on their way but promised that we’d see them again soon.
Throughout the afternoon, beginning at 3:30 I needed to bake one pan after another of the lasagna in my convection oven. That meant plugging us into electric. When the first one was done, Bill lit the Weber and turned it on low to keep that pan warm while the second one baked inside.

At 5:45 I announced that the entrée was ready and Pat brought her Caesar salad over to the Suite. Rob warmed the loaves of garlic bread on the bbq and soon enough everyone was loading their plates inside and moving outside to the tables and chairs we had set up. Everything was very good and then we offered up Pat’s homemade carrot cake (YUM!) and the Chapman’s ice cream that Bill and Sandra brought for dessert. No one can say there wasn’t enough food. There were 10 of us sitting down to eat. Oh crap! We forgot to sing Happy Birthday! 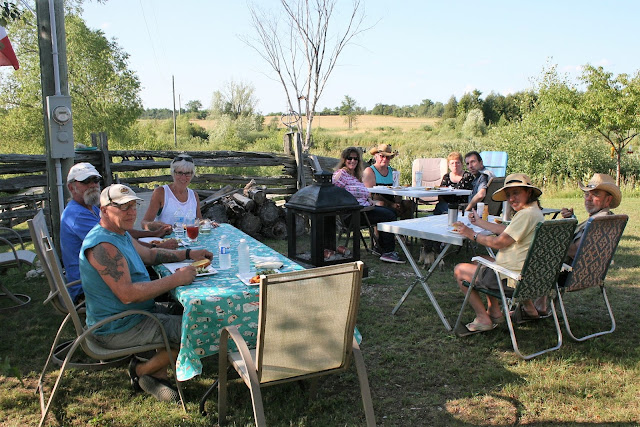 The day turned out perfectly even though earlier the dark gray clouds gave me a bit of inner grief. In the late morning and earlier afternoon after prepping I was able to get a few more chapters of my book read. This Jonathan Kellerman book is good but it hasn't got me hooked quite yet, too many other pleasant distractions right now.

Rob was pleased and appreciative for all the cards he received. I cleaned up the dishes we had inside from the day and then joined the others for a fire. It wasn’t a late night at all with George and Suzie leaving first around 8:30 and Pat and Rob soon after around 9. We were all worn out and needed to relax.

Bill and I moved inside after stirring the ashes and closing the shed doors. I hope you also had a great day. Thanks for joining us today! Your comments are always welcome.