So, we were both up by 7:30 on Friday, July 27th. I was actually up just before 7 and went for a walk to the corner of North Line and Baptist Church Road. It was the first time in a long time that I’ve gone beyond the driveway’s end.

When I returned, Bill was up and we made our morning brew together. As we were sitting at our laptops, we read news from our blogger friends and I went into Facebook. I read a few of the latest posts on FB and then play Scrabble and Words with Friends.

Today, I shouldn’t have. Well, it could have happened anyway. My computer came up with a huge warning of threats and potential viruses etc. (I’m sure you have had the scare at some time or another) and it froze. I was unable to exit, close or turn my laptop off. It recommended we call a number at Microsoft for immediate help. “No!” you are saying. Well, where were you when we needed you? LOL Yes, we called and got hooked into a very convincing scam. SCAM!!


My laptop is only a couple of years old and I wasn’t about to take any chances………so I thought! Thirty minutes at least on the phone, later I was to leave my laptop alone for a possible 2 hours while they did their thing, freeing up the ‘so-called viruses’ and giving me back my laptop WITH a 2-year protection plan costing us upwards of $200. We were just sick at spending that money but felt it was necessary. 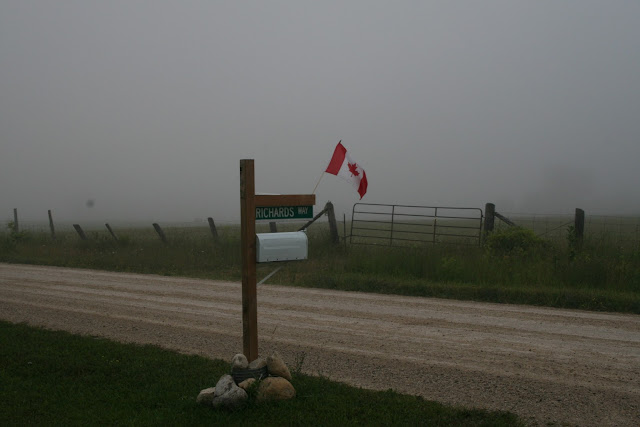 Without going further into more of this fiasco, we discovered we were scammed and Bill took my laptop to a 3rd party, reputable computer store in Hanover. It felt like I was missing an arm all afternoon, without it. Anyway, the day went on and I cleaned up and drove into Durham to visit Mom at 11. We had a wonderful visit, an improvement of 99% over the last one. I left there and did some shopping in town before returning to the Suite.

Bill had been waiting for his shed lumber to arrive from Rona and as we sat with Rob and Pat (they arrived just after lunch, much to Clemson’s delight – ‘finally!’ he thought) the huge load came. The driver impressed me as most tractor trailer drivers do, he backed the rig up the long drive and offloaded by a remote-control device strapped over his shoulder, like a lady’s purse. Impressive technology today. Both Bill and I took snapshots of this, it was pretty neat to watch. 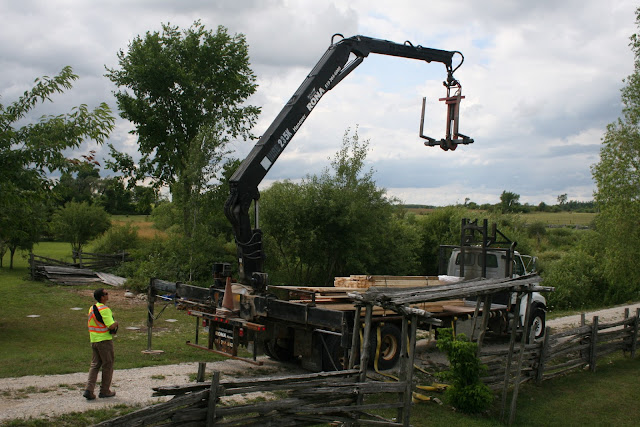 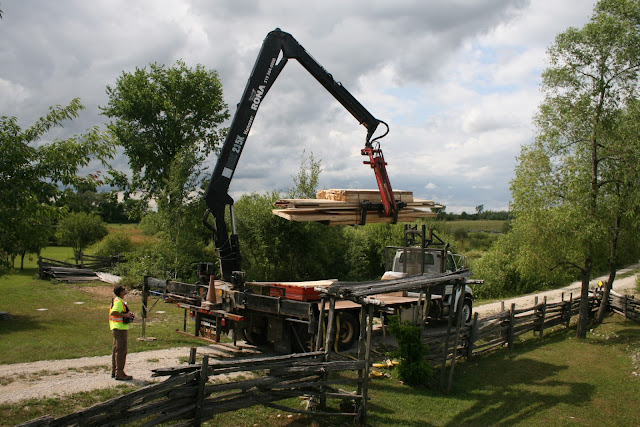 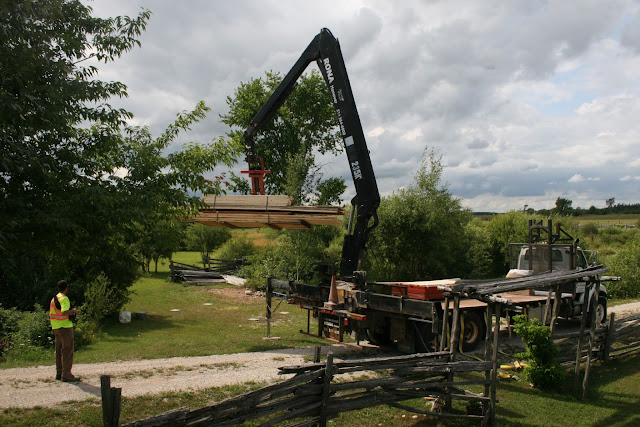 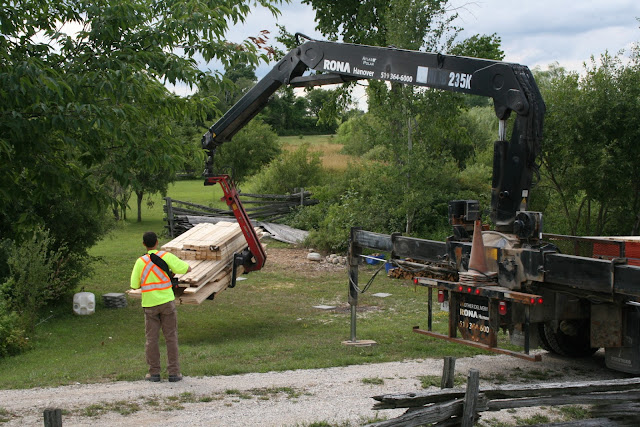 Mike arrived from the Acreage a short time later and before we knew it, Bill and Rob joined him and they were building!

The frame for the floor went down within a matter of minutes. I daresay Mike knows what he’s doing! I’m sure Bill was just thrilled with how it was coming together so quickly.

When the rain put an end to the work, well that and the fact that Mike had already worked today, Mike left and Rob, Pat, Bill and I sat first with a tea and then a Happy Hour drink. The sky all day was not something you’d want to place a bet on. Nothing lasted more than a few minutes and it changed.

At 6:30 we all decided it was time to start the Weber. We invited Rob to grill his burgers with ours rather than set up his bbq last night. Bill and I have been having an issue with our water pump the day before and it carried on into today. What is it with water pumps? I’ve heard that no one is exempt from their occasional difficulties. Bill can explain the steps he took, if he wishes, if he ever slows down enough to write a post. 😊 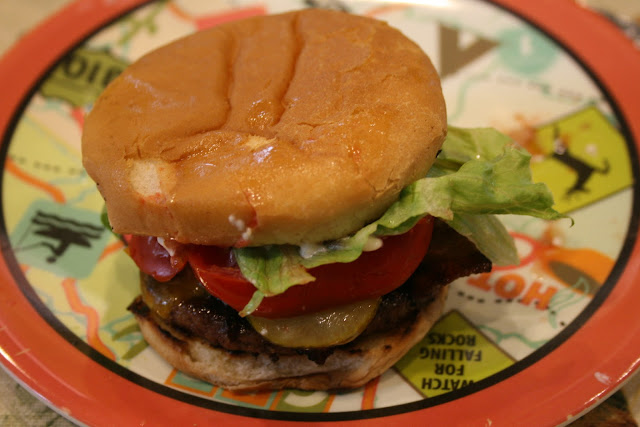 We borrowed some water from Rob, who gave us a jug full to get us through the evening dishes and morning Keurig fill-up. Thanks guys. Rob also brought me a dish of his stewed rhubarb so for dessert, I had some in a bowl with a scoop of Chapman’s Black Cherry ice cream. Oh my! I’m sure I deserved that treat. When Bill came in later, he had some ice cream too, not wanting to ‘spoil’ (his words) the rhubarb by mixing. 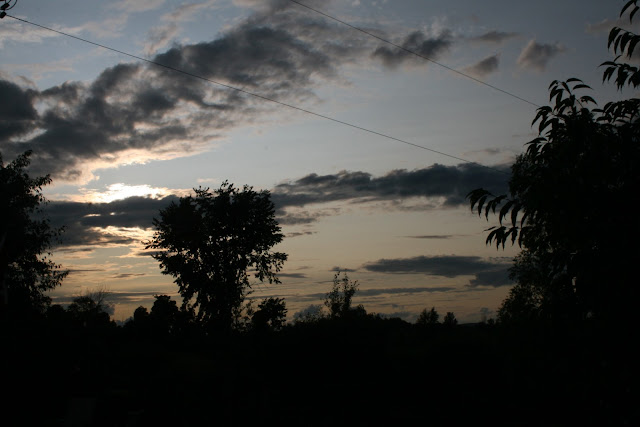 Clemson and I were in bed around 10 or was it 10:30 and dropped right off. I knew I was tired with the running around and after walking a total of about 4 miles today. I also managed at some point in the afternoon to get out the weed trimmer and take the tops off the spindly weeds in the area off the patio. That makes it look much nicer. Next time, I’ll go further down the corral hill. So, that was last night.

Today, Saturday, July 28th, I was up again before 7 and even though it was cloudy, took a walk to the corner. Arriving there, the rain spatters joined me. They weren’t heavy but wet enough for me to turn around and return home. Bill was getting up around 7:30 and headed directly over to the Acreage to fill the water bladder. He’s still working on the water pump problem. Rob and Pat had a party to go to so they left around 8 for Durham. They’ll be back later today.

I decided since it was a wet, cool day, I took the opportunity to do a thorough job of dusting the woodwork in the Suite. It needed it. By the time I finished that, the call came in that my laptop was ready so I scooted to Hanover to pick it up. If we’re lucky, we’ll get our money back by sending an email to the scammers. They tried to impress upon us that they were legit so let’s see them prove it!

After leaving Healthy Computers, I drove to the Bread Store for a loaf of bread and while there, took a tour through Salvation Army. I was only looking for a few colourful pillow cases. I found some at .50 a pop. Perfect! I was stealing (?), no borrowing an idea from Pat on how to protect our wooden dining chair backs. I loved the idea when I saw it on her chairs and it will work on ours too.

I stopped at Grant’s Independent grocery store and picked up a few more groceries, mainly lunch items for the workers at the Ridge. Back home, I noticed that our second reservation had arrived. George and Suzie’s coach was backed into Site #3. It was very nice to see them again too. There is still room for another camper in between but unlike last year, Gerry and Melinda will not be coming. The bunky is set up but it isn’t needed this weekend. That’s unfortunate but c’est la vie.

I was very surprised and excited to see how much Bill, Mike and Gerry had done on the shed. I snapped some more pictures after unloading the Rav and Donna and I made up some buns for lunch. It is amazing how good a lettuce, ham, tomato and cheese sandwich tastes when you are hungry. I hadn’t eaten anything yet at all so felt ravenous.

I cleaned up the few dishes while the guys went back at it. The rain returned, more than a light rain but they forged on until Mike’s daughter, and employee, stopped in to give them a hand. Surprisingly, after she arrived and donned her tool belt, the skies seemed to change. Sun appearances were more constant and the rain stopped for the remainder of the afternoon.

At 4:30 they called it quits for the day and enjoyed a beer while they rested on lumber. Clemson was down a few times, checking out the process.

When they left, Rob, Pat, George, Suzie, Bill and I took our chairs to Site #2 for Happy Hour. Clemson got a couple of treats from Pat and tried his darnedest to beg for more. He knew where they were kept! At 6 or 6:30 we went our separate ways for supper. Holy! I hadn’t given supper much thought so it was a ‘look after ourself’ kind of meal. That worked for us today as it has oft in the past.

Since I had some leftover lasagna from a meal early in the week, Bill was quite content to have a toasted tomato and cheese sandwich. We cleaned up dishes and Bill started the fire to see if anyone was interested in sitting around it for a while tonight. They were and we gathered for a couple of hours until the mosquitoes sent us back inside. 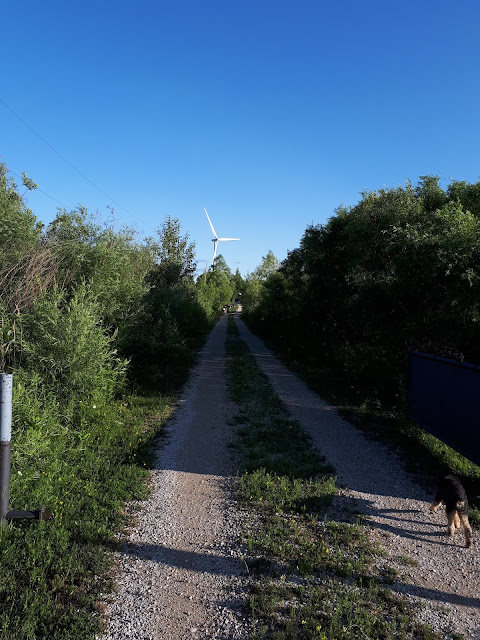 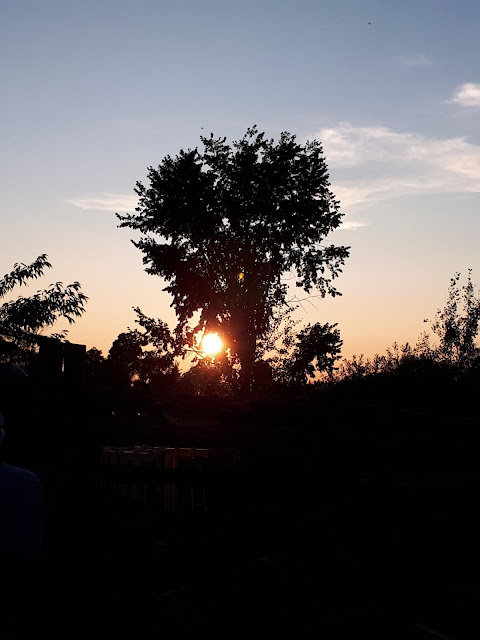 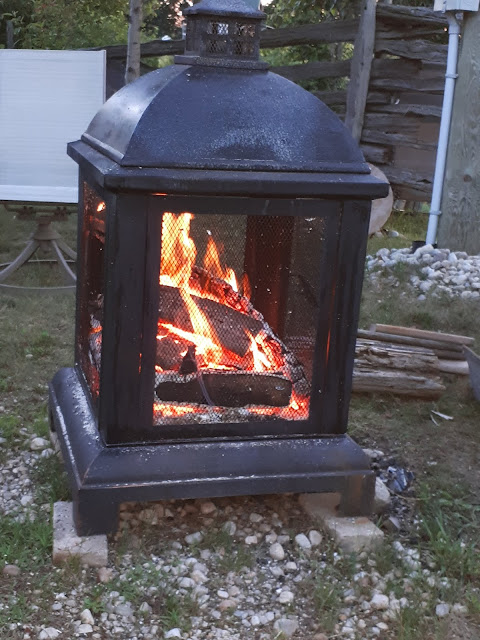 We watched a bit of Live PD before calling it a night. This has been a great day. A lot was accomplished, new company arrived and we are enjoying the time with friends.

Thank you for stopping in. Your comments are always appreciated.

Posted by Patsy Irene (Chillin' with Patsy) at 6:03 AM