Moving Day, Preparing for Colder Temperatures but Oh, What a view!

Love's Travel Centre, Williams, AZ
We were awake at 6 on Saturday, Mar. 14th. Maybe the ‘anxiety’ or ‘excitement’ of moving aided in the early rising. We weren’t looking forward to leaving the warm weather behind but we were just ready to move. Bill and I showered and then I went out for a nice walk. It is a pretty park and a pretty neighbourhood with new business malls across the street. The buildings all adobe coloured, pretty. 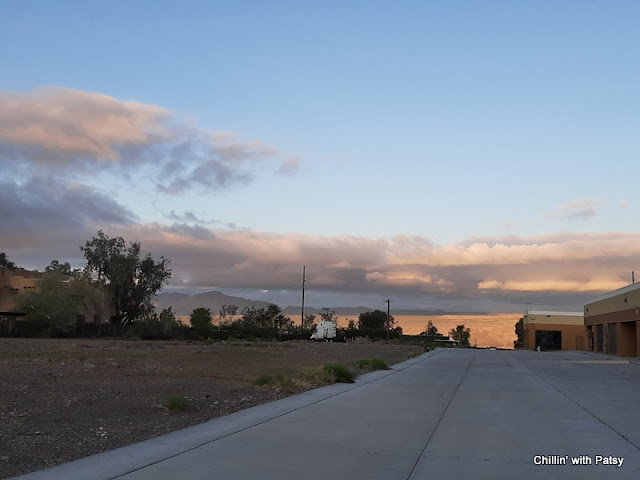 I tried to catch the quails again but even though that is obviously a favourite hangout for them, they are still too far away for a clear photo. I could hear them telling stories though. 😊 Goodbye little guys! Back at home, I had my tea and we each had a bowl of Cheerios. The day was glorious, 55F/13C and the sky is blue with big white fluffies. A perfect driving day. The rain is done for a few days.

It was only 8 am so I sat and read some blogs until Bill was finished in the bathroom. After brushing our teeth and securing two bathroom cupboards, I do the bedroom check and make sure the closet doors are secured and work my way downstairs. Bill does a similar thing outside the Suite. He brought the slides in while I walked the garbage to the bins.

We weren’t back far enough on our site to dump so Bill backed up and took care of that. We have 35 gallons of fresh water in our tanks for the road. Keith was ready so pulled up in front of our site and by 9:08 we were pulling out of Silver View RV Resort. It is a nice park, we’d not hesitate in going back. As we pulled onto Bullhead Parkway I texted Kim and they were waiting to follow the convoy as we passed the K fuel station where they were topping up. 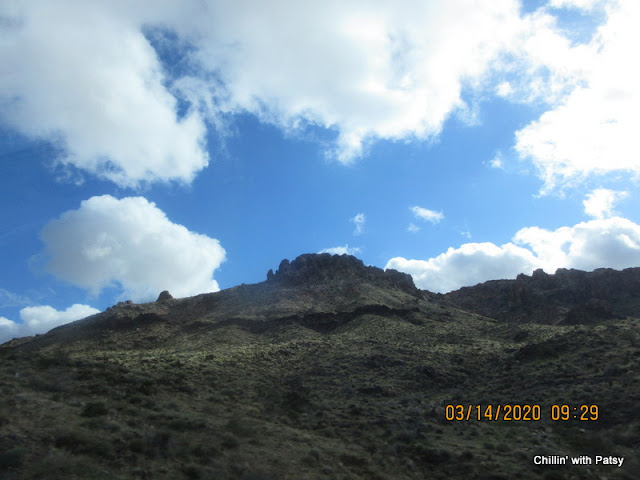 We did some climbing up AZ-68 for about 12 miles. If you’ve been here, you are familiar with it. We took it easy and set the cruise at 55 mph (in a 65 zone). The bonus is the views we get. I’m awestruck every time and saddened that we are soon going to be leaving them behind. We couldn’t see Keith or Ken and Kim behind us but since we hadn’t heard anything, figured all was well. When we turned onto I-40E I texted Kim. They were slowed down with the incline.

We were a way down the interstate when we could see them behind us but Keith was supposed to be in the middle! Kim said they never saw him making the turn in Kingman. He sent us a text and with sketchy service in the area, we didn’t get it for 25 minutes. All he said was “?????” Meaning he couldn’t see either of us. It all worked out and TG for the tekky world we live in as we were able to let him know to get on I-40E. We took Exit 123 for fuel at a Chevron and it wasn’t long and he pulled in too. Phew! Together again. Diesel was ridiculous at $3.39/gal. Ouch! 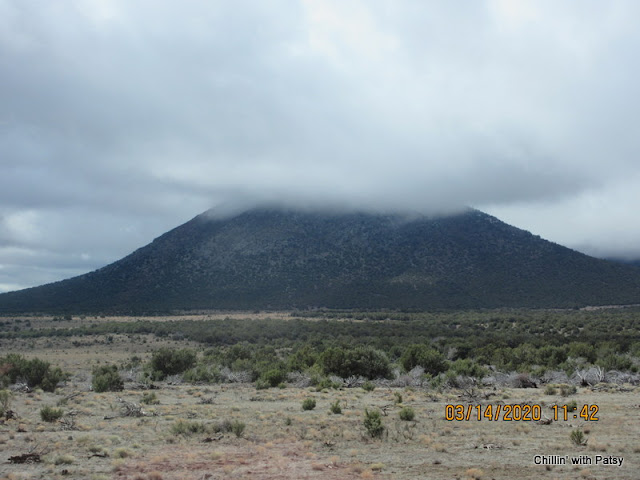 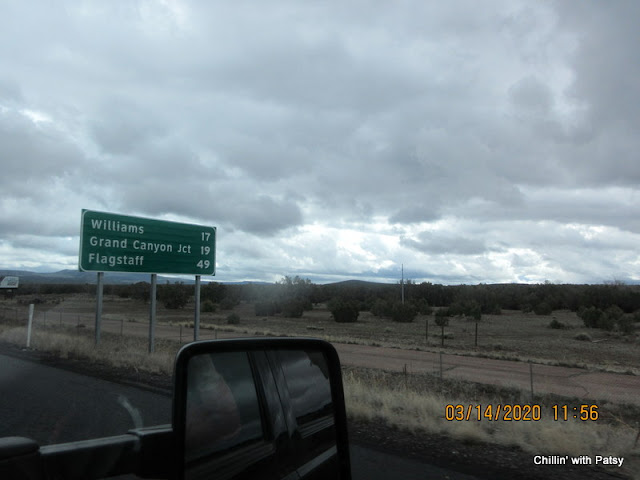 The landscape changed around us and when we were about 15 miles from Williams, AZ snow was quite visible in the mountains as well as on the grass. Not lots but still SNOW. Keith will be happy; he has missed the winter over the last month. We didn’t! The journey was good from there on and our next turn was onto AR-64 which is the road north of Williams to the Grand Canyon. 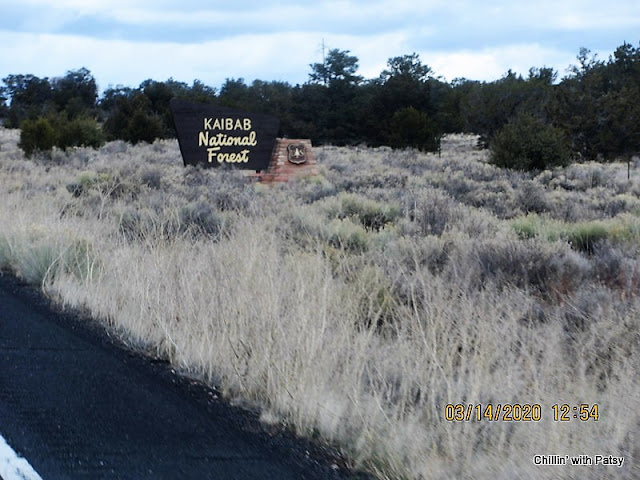 Now, you know our destination. We’ve seen it a couple of times already but Keith hasn’t, nor have Ken and Kim. We should never say ‘you HAVE to do’ something. I’m telling Bill all the time. They don’t have to! But this, if you are anywhere close, you HAVE to see it to believe it. So, we are driving north about 50 miles looking for the Fire Road in the Kaibab Ntl Forest. Bill and I found this free campsite in 2017 on our way home.

Once you turn onto this road, there is no turning around without going into these semi-designated spots. We stopped, Ken stopped and Keith stopped. We’re on a single lane and after walking to scout things out ahead, Bill tried backing into one.

Needless to say, it wasn’t going to work and my fear would be getting stuck and needing to be towed out. Cha-ching! After much more deliberation amongst the guys, Keith turned around easily and pulled off to the side. Ken unhooked their car and dolly, Kim drove the car pulling the dolly out and off to the side. Ken backed up their Journey motor home out to the road, turned it around, backed in to hook up the dolly and the car again.

Bill had to back up the Suite as well. No easy feat but painstakingly he managed to do it, slowly back the ¼ of a mile. Doesn’t sound far, but it was not easy. He is awesome and we didn’t get stuck! Once that was done, we pulled into a camp spot off the fire road near the highway. We pulled in behind Keith and parked. Then we all piled into Ken and Kim’s motor home and with the car in tow, drove the 9 miles to the Grand Canyon parking lot.


My oh my! Easily, he found a spot for rv’s in the first parking lot and we took the next 2 hours, walking along the south rim. It is nice for us to see it again, I’m still blown away by the beauty and magnitude. It is just plain fun to watch and listen to someone see it for the first time. We enjoyed that today. I still took tons of pictures. The weather went through all the motions. We had sun, rain, wind, sleet, more sun and over and over. It was a Saturday so it was quite busy today. 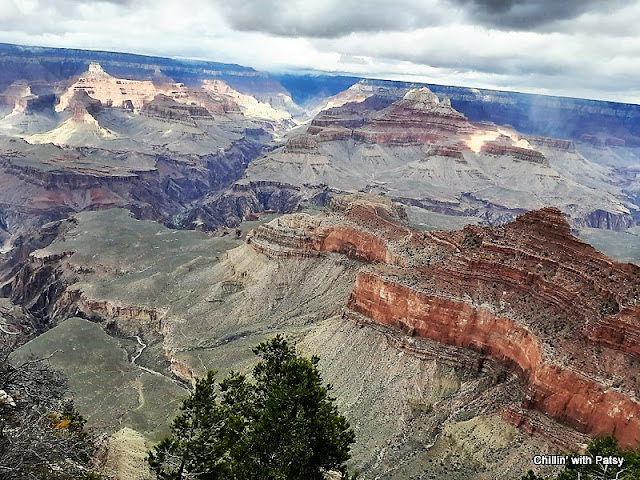 Around 5:30 we hopped on the little bus back to the parking lot and Ken drove us to the fire road where our vehicles waited. We couldn’t stay there for the night. Bill and Keith followed Ken back the 50 miles to Williams to a Love’s Travel Station where we hoped to park for the night. It was packed and Bill and I had a few fretful moments of what now? 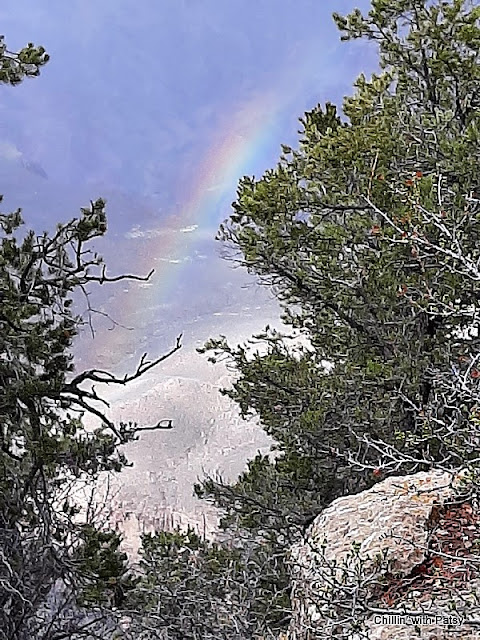 How much further do we want to drive and what are our chances of finding anything? It was late and most truckers were off the road. Ken did some checking on line for us about the Walmart down the road in Flagstaff and the Pilot J travel centre but they weren’t going to be any help. Because of our slide-outs, these truck stops are not where we go for the night. Ever. We don’t fit. Keith found a spot for his rig so he was set up.

There were 3 spots beside Ken (for rv’s) so we parked right in the middle. Bill put out his corner traffic cones and we all went in to the Carl’s Jr. restaurant for a late supper. It was 7 pm. Other than our morning cereal and we each had a muffin and a snack bar, we hadn’t eaten. The burger and fries were good. Well, they sure hit the spot and it beats heating up the chili. After we ate, we came out and opened up the Suite and Bill turned our blue flame heater on. We were toasty warm.


What a day! There were definitely good things about it, lots of those, but we have learned things to. I-40 is not traveler friendly. There are no Rest Areas from Kingman to Williams. Beyond that, we’ll find out tomorrow. It was smooth in places but then out of the blue, you hit rough patches or huge holes in the pavement. The scenery was certainly nice but when you are trying to make good time, it isn’t our #1 choice. We’ll find another way to go home in the future.

So, inside the Suite, I was too tired to complete my post with pictures. Bill sat with his book and tried to keep his eyes open. My sweater was as far as I could go without putting more thought into it so I wrote the day’s happening and will worry about pictures in the morning. We are settled, safe and warm. I hope you all had a good day. We look forward to a better one tomorrow. The outside temperature when we went to bed was 37F/3C.

Thanks for stopping by!