Fog Blanket, Must be a Long Weekend, Raking the Garden, Bird Watching

With a bit of a restless night, I woke for the final time on Sunday, May 20th just before 7 and got up. Bill was quick on my heels and we came downstairs for our coffee and tea. The morning is gray again, this time it looks like someone pulled the fog blanket up over our heads and it stretches for miles across the land. 50F/10C is registering on the thermometer and depending on which network you listen to, it ‘could’ partially clear by 10 am OR by 4 pm.

This sounds pretty typical for our Victoria Day long weekend. Thousands upon thousands of Canadians look forward to this first long camping weekend of the year. Trailers, back seats and trucks are piled to the brim with families and their camping equipment. I remember it being so exciting and usually, 7 out of 10 times being let down because of Mother Nature’s weather raining on our parade. There isn’t a doggone thing we can do about it, so most of those thousands go anyway.

Things have changed in other ways and unfortunately, this was through no other fault than the careless campers. Many Provincial Parks, if not all, have prohibited alcohol in their parks on this weekend. I don’t think that is entirely fair at all. Sure no one should ‘need’ it to have a good time BUT if someone wanted to sit around of an afternoon or around a campfire and responsibly have a drink, they can’t. 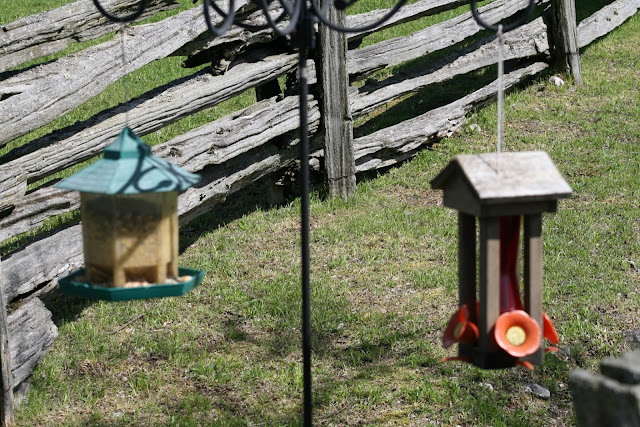 Noticing the birds in the area, I picked up some wild bird seed in Hanover yesterday so filled the feeders and boiled a batch of hummingbird food so I filled those two feeders as well. I had an interest in our canopy that is for sale so I will meet the buyer in Durham later this afternoon to make that happen. I got cleaned up and dressed for the outdoors and went up to the garden with rake in hand. As Larry the Cable Guy says, ‘Get ‘er done!’
Bill went out to work on one of his model airplanes on his new bench. I went out to my garden and began raking, pulling the loose grass out and the rocks. It was a very rocky area but still a nice piece of earth to plant in. It probably took me about an hour to finish prepping the area and that was pretty good physical work.

By 11:30 the sun started to make an appearance so it seemed like we were getting the good part of the day early. Yay! Bill drove over to help Mike with his water pump issue and helped them put up the gazebo canopy over at the Acreage. When he returned, Clemson who had been sitting on his stool jumped and ran for the truck. He has never run near the wheels but he always gives us a start when he runs excitedly like that.

Bill said that the guys are coming over to help us put up our canopy next so that is great. Bill and I can do it and have each spring and taken it down each fall but it is soooo much easier with 4 people. That job didn’t take long so we chatted for a bit before they left. Mike was impressed with what we’ve done with the Ridge and that is always nice to hear. I'll have to get a picture tomorrow of that.

At 1:15 I drove into town to meet Tina and she was prompt and very happy to have a gazebo for their trailer and something for the kids to play under. The money in my pocket felt pretty good too. While at the meeting place, I took a walk across the newly reconstructed Heritage Walkway behind the fish and chip place. It is very nice. Well, now we only have 2 things left to sell. There was a nibble on the tent but the lady was too far away to make it worth while for her. No worries, I totally understand that.

I came back home and had a small piece of banana cake with a yogourt cup. The sun was lovely so Bill had unplugged us from power and turned the invertor on. I took my carrot seeds and went out to the garden to begin planting. I’ve never put carrot seeds in the ground before so wish me luck! With the temperature likely to drop to 4C/39F I’m not planting any of my peppers or tomatoes yet. I’ll play that by ear.


When I finished putting the carrot seeds in the groove I created, I figured green onions are pretty hardy so planted a row and a half of those too. Half will be white and the other half will be red onions which will be a nice change for salads. I will eat the white ones more regularly as green onions (shallots) and let the red ones get big. I’m sounding so positive, aren’t I? This is the easy part of planting the garden, now that the hard digging, hoeing and raking is done.

Bill and I sat outside after 4, when everything was completed for the day. He said, “the frogs aren’t chirping”. Huh, that is odd, they are always chirping early in the afternoon. The story (wive’s tale/farmer’s tale) is that when the chirping frogs stop for 3 consecutive nights and then start up again, it means the cold days are over. I’ve had that relayed to us by 2 or 3 people and usually just laugh. Tonight, isn't the night though for it to begin. At 6, the frogs had started.


We both enjoyed this day. Some comradery with Donna, Gerry and Mike, helping each other. I got my garden started and I’m beginning to feel excited about those rewards. Bill got his hands into some of his planes and is finishing a few small jobs around the place. The weather seems to be turning for the better and that is encouraging.


I took my Canon with the zoom lens outside today and captured birds, turtles, geese and even turkey vultures! At 5 o’clock when the sun went behind a cloud and the chilly wind gave us goosebumps, we took my margarita and Bill’s rum and coke and moved our private Happy Hour inside. I tried to read but knew I’d soon be reading the inside of my eyelids, so Bill found a movie that we both enjoy. It was nearing the last 30 minutes but we watched Guarding Tess anyway.

For supper, Bill lit the Weber at 6 and I pulled out the Swiss Chalet Pork Back Ribs from the freezer. With some potatoes on the side and a veggie, the meal will be complete. All day, I’ve had a fire going in our pit. We’ve had some boxes piling up that were just getting wet sitting outside so I lit the fire late morning and kept at it all day. Adding cardboard and wood just to keep it burning, I love the smell of a campfire even though we don’t always sit around it.

Supper was great, I’d buy these ribs again even though the sauce was a little spicy for us. They were so tender and just the right amount for two people. When dishes were done, we watched the season finale of Madame Secretary. It was a good one, we were hooked from beginning to end. I won’t let the cat out of the bag in case you haven’t seen it. Then we watched American Idol, of which we’ve followed from the beginning of this new season. They're down to 3 contestants.

I hope you have had a great day. The sun in the west is preparing to set and so is this gal.
Thank you for stopping in today. Please feel free to leave a comment.

Posted by Patsy Irene (Chillin' with Patsy) at 7:49 PM