The Ridge
I woke up on Wednesday, Apr. 24th at 5:30 and I could hear Bill downstairs getting ready to leave. He’d had his shower and breakfast already! He is a very quiet guy and tries hard not to disturb me. I told him to wake me before he left for London this morning so I knew he would. I met him on the stairs after I heard him making his coffee. He was coming up for his kiss and hug goodbye.

This would be the first of many summer drives to work at CanAm and hopefully later today, or tomorrow morning, I will hear of next week’s schedule. It is nice to have the dates so we can plan other things around them. It is a bitter cold morning with winds and only 35F/1.6C so after letting Clemson out for his business, I decided I wasn’t going to walk this early. I saw the school bus go by just before 8 and just felt grateful for my indoor warmth and the fact that I don’t have to out to go to work. I just don't like feeling cold.

I had my tea and read blogs. After making the bed, I started pulling clothes out to prepare for the Clothing Exchange on Saturday. It will be another fun time, I hope, with a new host. Because there is supposed to be an exchange in London near the end of May or first of June, we didn’t extend the invite that far. It isn’t nice enough weather to invite them to come and stay here in the Bunky yet.

This is an extra one (we usually only have 2/year) as my niece wanted to host for the first time. I will have to keep some clothes aside for the later one, if possible. We usually have a carful for the London trip with 4 of us planning to make that trek. So, I did pretty good, puttering around upstairs in my area of the closet and my cupboards and drawers. Clemson remained sleeping for most of the time I was up there and then about 11:30 he came up with me. I lifted him up to wrestle with one of my tops.

At 12 noon, I came downstairs, done for the time being and fried up some cucumbers and radishes (thanks Shirley!) for lunch. It’s funny how when you are busy you don’t notice whether you are hungry or not. I had my coffee and then devoured this delightful meal. I only wish I’d had more radishes. The sun was making some attempts at poking through the clouds but the temperature sure isn’t moving in the upwards direction too quickly. 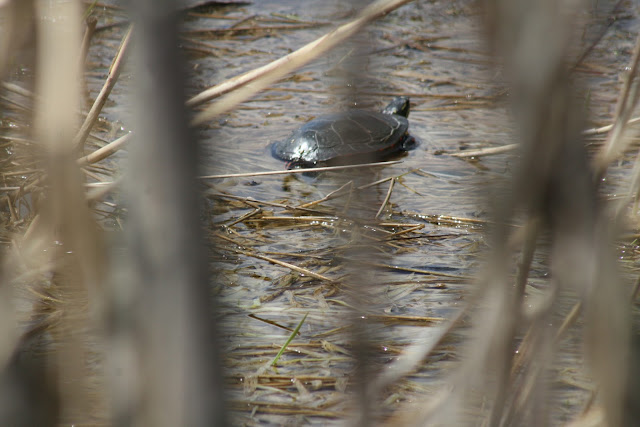 I cleaned up dishes and gathered up Mom’s Income Tax papers to drop off in town tomorrow. Next, I caught up on my post. When I was purging clothes, I found a few pieces that had been worn once or twice that I wanted to get rid of so put them in the kitchen sink and washed them by hand. It isn’t often I have things to wash by hand but I wasn’t going to do a load of laundry before Saturday and this was the next best thing. I used my plastic ribbed dish tray as a scrub board. Pioneer woman!

I slipped Clemson’s flannel sweater on and we went outside for a walk. First, I needed to hang my 4 items on the clothes line. There is enough wind to dry them but it hasn’t reached 50F/10C yet so I don’t know how long it will take them to dry. We’ll see. I have a few days before I need them. We walked down the lane to see if there was anything in the mailbox and when I got close, the flag was up. Clemson did his usual thing and went to the stones at the base of the post and sniffed. 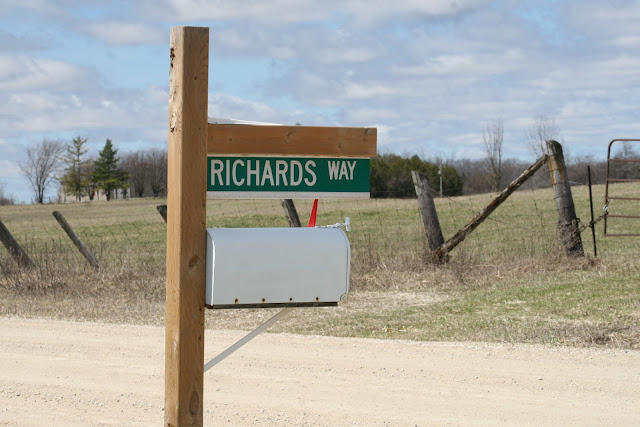 After retrieving our mail, I waited at the end of the lane. And I waited some more. Remember, he can’t hear me call him and I’m trying to get him used to only going that far without his leash and then turning around for home. He has been good but because he can’t hear and can get distracted by his nose, I’m cautious. A car went by as we were there but I don’t even think he noticed and they did. They were kind enough to slow right down to a crawl as they passed.

He raced me back up the lane even though I tell him that it isn’t a race. He’s always up at the mat waiting for me, wondering where did I go? His attention span is about as short as Mom’s some days and I’m saying that with only love in my heart. I thought he was ready to go inside but as I bent over to pick him up, he just wanted to play. Down on his haunches, he raced around the mat 3 or 4 times before tiring and letting me pick him up.

Inside, we sat together and this is where I’m sure he missed his Daddy. He usually sits with Bill in the afternoon and me at night. Those are the rules, his rules. Now that we know them, we try not to deviate from them. Who runs this household anyway? I read my book for a peaceful hour and a half. Clemson finally settled and slept either on my lap or beside me until 4:30 when he must have decided that it was his supper time.

Well, that isn’t too bad but I stalled by taking him outside to check on my clothes on the line. They are almost dry but I’ll give them another hour before bringing them in for the night. They can hang in the shower until morning. We took a walk down the laneway again and when we returned, I fed him. I missed having a tea earlier so decided to use the last Decaffinated coffee pod that Rob had left with us. I don’t need anything keeping me awake tonight when I go up to bed.

I had taken 2 chicken THIGHS out of the freezer and decided to cook them in Madame IP first and then ‘maybe’ brown the skin on the Weber. The temperature has actually risen to a sunny 50F/9C here on the Ridge so it shouldn’t be too bad out there with the sun shining on that side of the Suite. I’ll let you know if I actually do that. Sometimes my ideas don’t blossom for one reason or the other. Stay tuned!

On my walk down the lane, I noticed that Mother Goose is still sitting on her nest in the clump of grass out in the middle of the pond. Two years ago, that didn’t fare too well and her eggs were stolen, eaten or drowned. Last year, she had success so I’m hoping she knows what she is doing this year. Father Goose is on the opposite side of the lane, in the east pond sleeping where he has been most of the day. Maybe she told him to get lost for a while.

I found some niger seed in the Bunky earlier (I was pretty sure I still had some) and filled the finch feeder. Within 10 minutes, I noticed a finch had found it. Yay! That makes me happy. It wasn’t a gold finch but maybe soon, they too will find the food. Last year I tried the feeder but must not have filled it enough as it didn’t seem to dispense seed properly.
The chicken thighs were done by 6:30 and the frozen carrot slices I had placed in my small pot on top were ready too. Success on both counts. I sautéed the thighs longer making them brown so skipped the barbecue. I knew I would.
Supper was great, those thighs pack a lot of meat and I do love chicken. Bill won’t be disappointed to be eating meatloaf tonight instead. As you know, chicken isn’t his favourite thing. I cleaned up dishes by 7 and sat to finish my blog.

I hadn’t heard from my working guy yet but wasn’t surprised as it was a day of two orientations, one on a Momentum Toy Hauler. I’ve seen them at shows and they are a big unit so lots to talk about, I’m sure. Update: he called at 7:15, all set up in an rv at Kirk's place, one he'll be using for the whole summer. Yay! 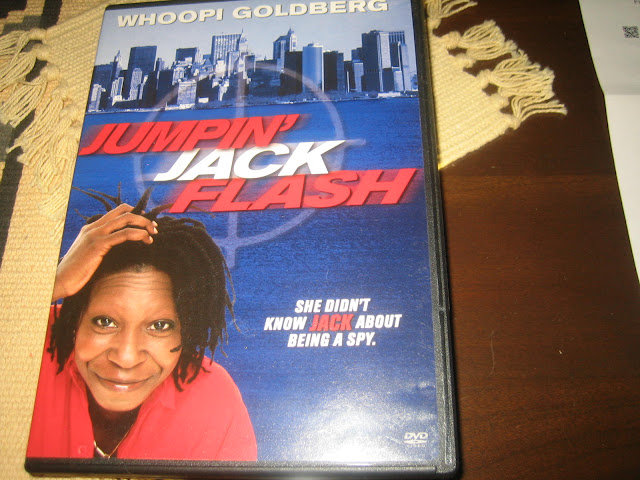 When my blog is published, I’m sitting with Clemson and putting in a movie that I had ordered over the winter. Jumping Jack Flash was a movie that I loved years ago and recorded it on a vhs tape at the time. The recording was not very good and I ended up getting rid of it. I’m hoping it is as good as I remember it to be. I didn’t get into anything too strenuous today but I did get some clothes purged at least.

I want to clean the Suite tomorrow morning and then I am helping Donna with Mom in the afternoon. She has an appointment outside of Rockwood and it is much easier with two of us. I also have jewellery to go through to see if I'm ready to part with any more pieces.

This has been a good day; I hope yours got some sun as mine has. Thank you for popping in to see what I got up to. It is always nice to hear from you if you wish to leave a comment.