I opened my peepers just after 5:30 and felt Bill move at the same time. There are mixed feelings today but mostly excitement about returning to our homeland. We are so close and we become anxious to get the last stretch under our wheels and in our ‘dust’. We aren’t tense while in the United States but there is still a huge relief when we say s’long to the Border Crossing Guard.

We had our morning drinks after taking turns in the bathroom for a sink bath. I was pulling the slides in by 6:40 and pulling out just before 7. Rob walked over for one final ‘safe travels!’ and we were On Our Way. The sky was mostly cloudy but to the east there was a hint of a pretty rising of the sun. We caught I-75 and grit our teeth as we endured the rough roads for at least 20 miles.

I witnessed one of the most beautiful sunrises since leaving the southern states. Just as we crossed the Veteran’s Glass City Skyway in Toledo, the sun put on a gorgeous performance for me, reflecting on the water of the Maumee River. This bridge is very interesting, spanning to a 400’ height. 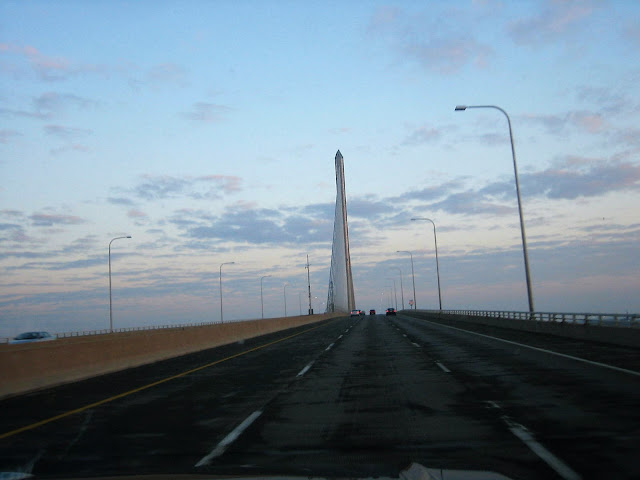 The interstate finally smoothed out before we took Exit 20 and hopped on I-275. Our destination first today was Bluewater Shipping in Port Huron, MI to pick up Bill’s package.


It was a good drive and eventually the sun broke through the clouds and the clouds took offense and disappeared completely. From I-275 we took exit 17 on to I-94E and it really feels like the home reach now. At 9 we stopped at a Rest Area for a leg stretch and piddle and got back on the road for 20 minutes more. Exit 274A brought us to Lapeer Rd and Bluewater shipping. Bill was quite looking forward to getting this plane, there was quite the story behind it.

The big surprise was that his ‘one’ package (according to FedEx) was actually 6 big boxes. Not heavy, just bulky. LOL We opened one slide and put them in the living room and drove to the border. There were 4 vehicles in front of us and within 5 minutes, we were on the good side. What a beautiful day! It is 53F/12C. I love reading the familiar signs on the 402 and I LOVE seeing NO snow! Time to relax and regroup.
It was 11:15 when we took our Exit 98 and pulled into Can-Am RV. This wasn’t looking good as the lot was overflowing with trailers. Not all staff was in on a Saturday but we got warm greetings from those who were. Kirk, one of the owners, has offered to let us stay on their farm, just down the highway. This is a very kind offer and one that I will appreciate a lot. Staying on a peaceful country setting as opposed to a busy parking lot? Easy choice and I thank Kirk and Kate very much for their hospitality.

After a quick lunch of warmed up leftover stew and rice, Bill and I had a visit from my son, Patrick and grandson, Nathan.

I love his enthusiasm to come and see us as soon as possible. I’m so happy to have arrived on a weekend when they are available. We had a nice two-hour visit, oh and Molly their Golden Doodle too. Nate is a very intelligent young man and enjoyed the interesting squish ball that I found for him. We sat outside the whole time, enjoying the beauty of this sunny day. When they said goodbye, I checked the temperature and it was 67F/20C.

Clemson and I walked out around the yard and down the back lane before coming inside. I wanted to crochet an addition on my project from a while ago but it wasn’t coming together as I’d hoped. I decided to leave well enough alone and instead start supper early. We were both hungry and had grilled cheese sandwiches. The onions and Vlasik dill pickles in mine added an additional kapow!

We had made prior plans with Bill’s youngest daughter, Jess and her fiancé, Matt for them to bring that new little grandson, Easton for our first ‘meet and greet’. They arrived around 5:30 and it was love at first sight. This little tiny boy stole our hearts. Somehow, in pictures, size is never easy to depict. Bill was very proud to hold Easton and tell him who all he was named after. I snapped a picture or two (or 8) of the two of them. 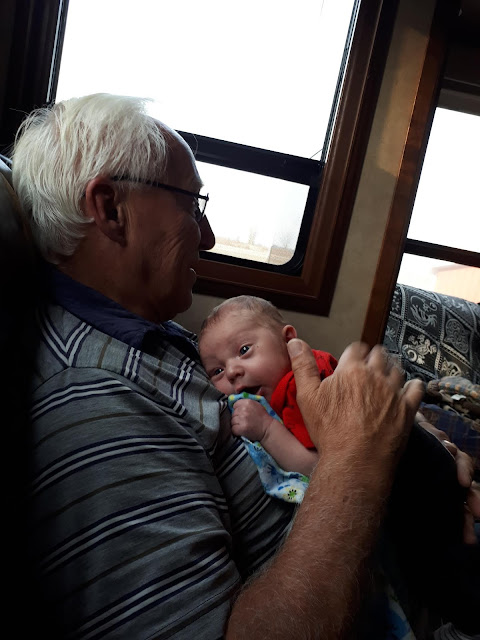 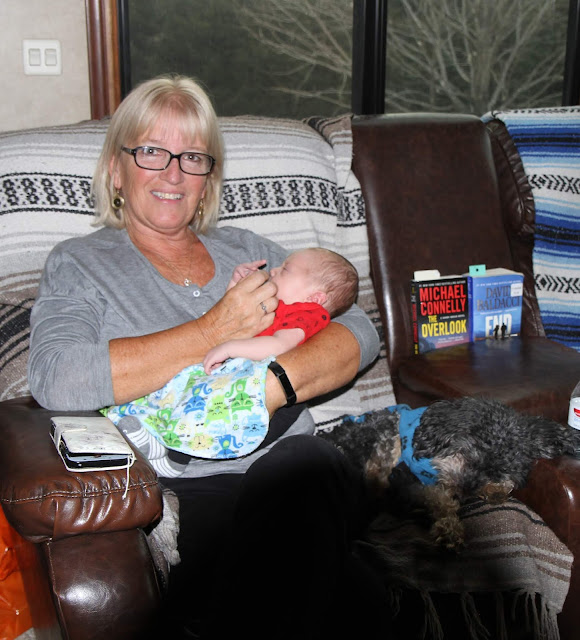 Then it was my turn, after Easton had his bottle. He fussed a bit, I seem to bring out the best in babies, but then settled down and I didn’t want to give him up. This is the priceless age, one of them. There are so many. After more pictures, a selfie included, they left around 7:45. We’ll see him again in a week so that will be nice. We had a bowl of Lime Jell-o fluff (I don’t know what to call it!) and it went down well with a taste of Rum Chiata. I think it might be an early night.

This has been a wonderful day and I’m very grateful to be home again. I chatted with Rob and Pat, via text so I know they arrived home safely around 2:30 so we can breathe easily about that. We missed them on the return trip and they said the same thing. 😊 I also chatted with Kim on text, her checking in to make sure we were settled in. Such good friends we have and we are thankful for every single one. I hope your day was half as good as ours!

Thank you for your visit. Hello Ontario!