I am thrilled to report that when I woke up at 6:30 on Thursday, Apr. 4th,
everything was still. No twirly whirls in my head today. Yay! They never last long, the longest being about 4 hours and as long as I remain in one position, no mishaps or falls. But I will tell you that when something like this happens to me or when you get sick, the first day of feeling good again is like a rebirth. I’m sure you’ve experienced that feeling too. 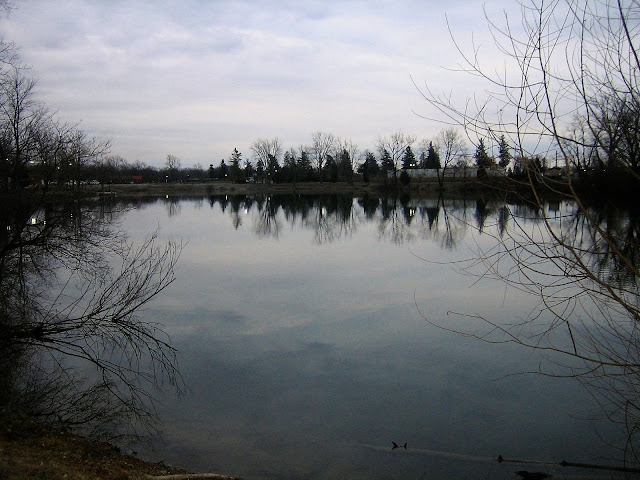 Clemson had just done a shake and curled up closer to me so I had to move without disturbing him at 7 when I got up. Bill was already downstairs with his coffee so I sat with him for a bit before going for my last walk here, this spring. It was reading 47F on the weather station and no wind so other than my new neck muff, I didn’t have to layer up too much. It was a cloudy sky with no hope of sun today!

I only did a mile before returning and making us poached eggs on rye toast for breakfast. We washed up, did dishes and were pulling out of the park at 9 am. Just a short journey today but 2 hours closer to home. We could keep moving but Bill and Rob have plans to go to the International RC Expo in Toledo together. (Radio Controlled ‘things). We stayed at this KOA last spring as well and it isn’t anything fancy but they treat us kindly and just what we need for a couple of nights.

The rain began almost as soon as we got onto I-75N but only lightly. It remained with us for the rest of the trip and when we stopped at the Rest Area for a piddle 20 minutes before our destination, it added to the chilly 39F and gave us all goosebumps. Brrrr. It won’t be fun setting up in the rain and it will be the first time in a long time. We turned onto Middleton Rd. which is a quiet paved country road with pretty properties along the way.


It was 10:30 or so when we pulled into the park at Perrysburg.  Oh, and believe it or not, the rain had stopped. Yahooie Louie! There was only one other rv in the park when we arrived which is certainly different than the 10 or 12 last year at this time. It was cold but we were here. We were settled with 2 sites between us, ours being a longer site for obvious reasons. Bill said that it was under new ownership and that there were major renos going on.

Once set up, we each had a coffee and sat with our books. It was too cold for us snowbirds to be outside and before we knew it, we were dozing. I never sleep for long in the afternoon so quality time was necessary for me. I went upstairs. It was too noisy beside my sweetie. When I woke half hour later the heat up in the bedroom was ridiculous so Bill turned the source down a couple of notches. We had an apple and some cheddar cheese for lunch and planned on an early supper.

This KOA has new Wifi stations installed since last year, when it was the pits, so the gal in the office asked us to test it from our site and see what we thought. Let me tell you, it is awesome! Many, many parks offer FREE wifi but it is never a draw for us, or a bonus feature because unless we are sitting in the office/clubhouse or are parked right next door, it isn’t worth the paper they give you with the password. You may be able to sign in but it is too slow for our liking. 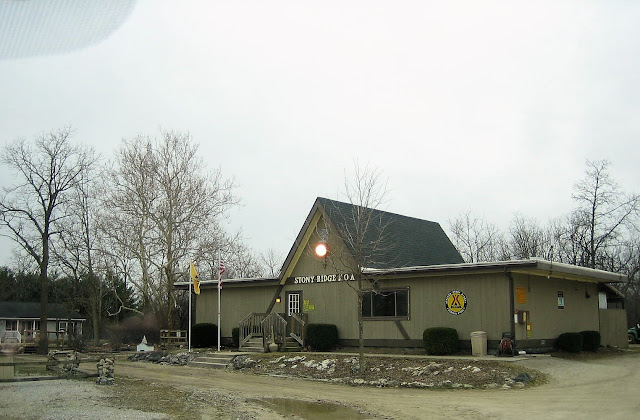 Here, there is no password. We are not beside the office but there is a wifi station right across the lane and it connected immediately. Not only did it connect, we are able to watch YouTube videos with no hesitation, open email videos quickly and we have done all of the updates on our phones really quickly. I am impressed, we are impressed and I know Rob told her on all of our behalf but I will do the same tomorrow. It justifies the price you have to pay, staying in a KOA.

Bill found in their handout that there is a Camping World within 11 miles so we asked Rob and Pat if they wanted to go in to Rossford to check it out. At 2:30 or so, we took a drive. There are lots of stores along the strip, which is Hwy 23/Fremont Pike and Pat’s and my eyes grew big. Oooh! Shopping! There is a TJ Maxx, Hobby Lobby, Meijer’s, Bass Pro Shop, Walmart, Sally’s, Bed, Bath and Beyond and Dress Barn just to name a few.

At Camping World, we found 3 things for Clemson. He is not keen on new things and won’t even attempt the 3-step that we bought him to help him get up on the couch or the bed. He does like the food mat we picked out for his dish and he will like the little short legged Pet Bed this summer. He is finding it difficult getting up and down off the ottoman he has now. I like it for my feet anyway when I’m sitting outside. I can take the step thing back for a refund tomorrow.

The guys are leaving in the morning for the show in Toledo at 7:30 so Pat and I will take Rob’s truck in the morning and check out some of the shops. For supper tonight, around 5:45 when we were both hungry, I warmed up the rice and stew in the microwave and we enjoyed it just as much as we did last night. There is still one meal for someone. I might freeze it for another time. We cleaned up dishes and did some more online playing. It feels good not to have to be watchful of how much data we use.

Oh! When we pulled into this site, the same one as last year we think, our door opened out to a muddy rut and of course that means traipsing it in and out on our shoes. I swept the floor inside and shook the mats and then when Clemson wanted to go for a walk, I lucked out. It was cold but I bundled up good and took him for a longer one than I first planned. While out and about I noticed a staff member picking up and dropping off garbage.

Hmm, when we got around the office on our return trip, he was putting stuff in his personal vehicle. I didn’t know what time it was but just struck up a conversation with him. I asked if the park had any ½ wood pallets (we called them skid in our employment) that we could put down outside our door because of the mud. He couldn’t have been more congenial and told me he’d just dropped a whole one in the dumpster. Lickety-split, he hopped back on the 4-wheeler and went and got it for us. I couldn’t thank him enough.

The rest of the evening was quiet. Bill didn’t set the satellite dish up for 2 nights as we have recorded programs to watch and books to read. That was pretty much it for our day. More light rain began around 6:30 but it wasn’t a bother to us, we weren’t going anywhere. I hope you’ve enjoyed your Thursday. It seems odd to me that we’ve changed locations today, it doesn’t feel like we moved this morning. LOL

Posted by Patsy Irene (Chillin' with Patsy) at 5:59 PM