Silver View RV Resort
I heard Bill downstairs at 6:45 on Thursday, Mar. 12th and was surprised I’d slept so well and so late. It looked like a lovely morning and after such a lazed-out day yesterday, I was anxious to get out for some fresh air and a nice walk. With my hoody being all I needed, it was 60F/16C, I headed down the east park road and out the gate.

Turning towards the south seemed to be my destination for a reason. There is a park next door with a similar name and a nice lady walking her dog. She was over the fence and we exchanged friendly greetings.

Then I could hear them. Gambel quails! There they were, scurrying around just in time for my camera to get focused. I carried on walking and was rewarded once more when I saw a road runner getting ready to cross the road. Yay!

I carried on, following the sidewalk down another street that turned and met up with Goldrush Road at the bottom of the hill. If there had been sidewalk all the way, I might have been tempted but instead of walking on the dirt and gravel, I turned back for home.

Five more quail chattered in the trees and I got a picture there too. I was happy, it’s a beautiful day in the neighbourhood. There wasn’t a real sunrise and slowly the clouds took over the sky.

Back home, I had my tea and Bill said that the rain today was reversed from the previous two days, coming in the afternoon instead of the morning. Tomorrow we’re hoping for some dryness at least so we can pack the mat and bbq away without them being wet. At 9, Bill drove over to pick Keith up. They needed to get some propane in town. I needed to look after my wedding rings; I noticed the other day how dirty they are, so I took care of that while Bill was gone. 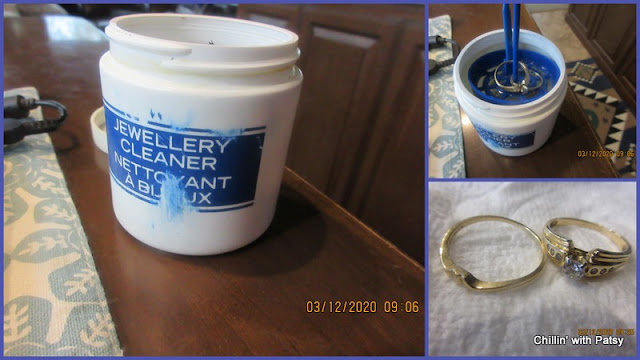 My rings are shining brilliantly again

When he returned, we had a coffee together and while I delved into my book again, Bill sat at his laptop checking out Google Maps for our journey home. Talk about changing plans, we all do it and sometimes often. Originally, this winter journey was going to end with us heading north up to Langley, B.C. to visit friends in the spring. It’s a long way up but we’ve planned it for a couple of years. Reality has set in and we now aren’t going to go home that way.

A decision had to be made so we called our friends and gave them the unfortunate news. There are just too many things this winter that have put the kibosh on that added journey. No point in pushing our luck with the tires and Suite issues. We’re going to head for home come Saturday. Taking a big rv up there, trying to find a suitable place to camp for a week, considering how much we’ll see of the two of them with their work schedules plus the extra 3,000 miles added on to our trip – it just makes sense NOT to go. They understood and certainly support our decision.

Bottom line, we’ll have to hope that maybe we can afford to fly out for a weekend sometime during the summer months and forget trying to take our home that distance. We’re saddened about the decision but when Jell-o jiggles, we’ve learned to adjust accordingly. So, with that resolved, Bill and Ken have been discussing routes home. We all figure to reach Canada in the ballpark of April 4th.

Bill got a text from his 2nd daughter, Charlotte, informing us that Ontario’s schools will be closed from Mar. 14th until Apr. 5th because of the Covid-19 virus. Wow! That can surely put some families in distress, dealing with day care issues. We are thankful that it has worked out for our 5 children that have offspring. One works in the school system so she will be home with her girls, one has children old enough to be home on their own, one has a child too young, one with children fully grown and one  grandson will have his Mom home part time and a Grandma around the corner. That is a relief for them all.
Patrick called and we chatted about the goings on in the world and it was nice to hear his voice. He admits to being terrible with the 'keeping in touch' role. I laughed and told him that I agree! He doesn’t get it from me! I finished my 5* book and thought I’d go for a walk but the rain spatters chose to start on cue. Instead I mixed up a batch of Cherry Jell-o (speaking of Jell-o above) and checked cupboards to make sure that I have enough ingredients to make a nice batch of chili for travelling. 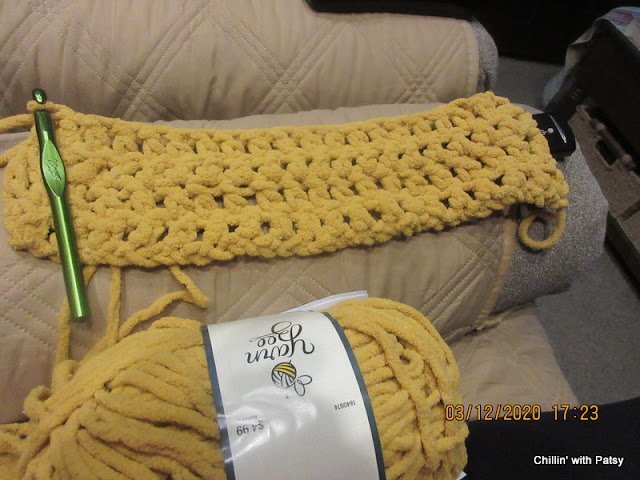 Then, I sat with my wool and attempted to get a start on my sweater. Wish me luck! It took me 4 times starting, tearing out in the traditional ‘rip-it’ fashion before I got it. Not each time because I didn’t understand but the pattern said to double the wool and that just made it way to thick for a sweater. I’ll change that on the written copy. Eventually, I got in the rhythm and crocheted along at a steady pace.

Bill was reading his book, The Fallen, by David Baldacci. He discovered that we’d already read The Winner so quickly moved on. He was feeling sleepy so we took advantage of the break in the rain and went for a walk around the park to stretch our legs. It was very mild out, 68F and without any wind, we enjoyed the air. Other than to the garbage and maybe to Keith’s, Bill hadn’t been around the park much. Back home, we carried on doing what we were doing and I blended the cream cheese and heavy cream for when the Jell-o is set. 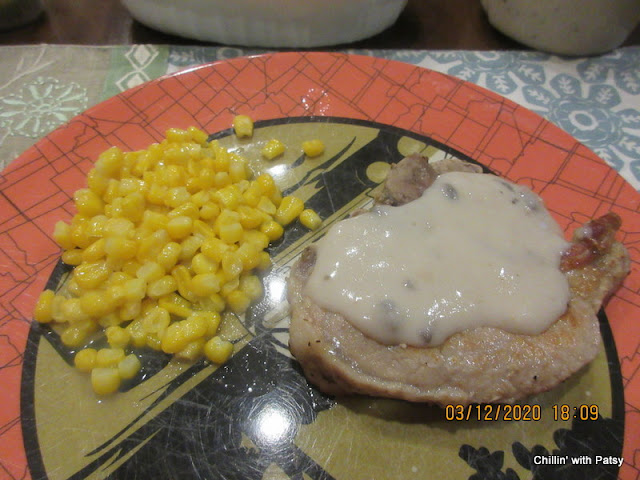 this was supper
At 5:30, I was feeling hungry so got the pork chops cooking in Madame IP. Not my favourite but they’ve been in the freezer for awhile and we needed to eat them. I cooked some corn for each of us as a side dish and warmed up the remaining mushroom soup gravy from the other night. I had to douse the chops pretty good but they were tender and tasted pretty good. Fair, well, they were okay. 😊 For dessert, we had a piece of cheesecake again. I do recommend this crust, folks!

We did dishes and sat to enjoy the rest of the wet evening. When I closed our outside door at 7, the ground under our Suite was just a pool of water so that was a lot of rain. We’d also been experiencing thunder and lightning throughout the bulk of the afternoon, probably our second time this winter. We’ve had a pretty genteel day and it was all good. I hope you enjoyed yours too.

Thank you for your visit.
Posted by Patsy Irene (Chillin' with Patsy) at 9:03 PM