A Drive to Woodstock, Early Birthday Gift and a Wee Mystery

On Wednesday, Apr. 28th Bill and I were up before the birds at 6:15. We washed and got dressed for the day. A busy one but a good one. We left the house at 7 to clean the Mat in town and left Durham after fueling up at 8:15. Today, Bill was off work and we were taking an easy drive to my daughter’s house outside of Woodstock.

Bill had something to pick up and I had an early ‘kind of birthday’ gift for her. Bridgette works at Regency Fireplace Products in Guelph BUT right now she is working from home, as many others are because of the lockdown. When we arrived, she was in the midst of a call with her boss but managed to snag a hug. No one will tell me that I can’t hug my daughter when I see her. 😊 When your child holds their arms out to you………nope, can’t resist. 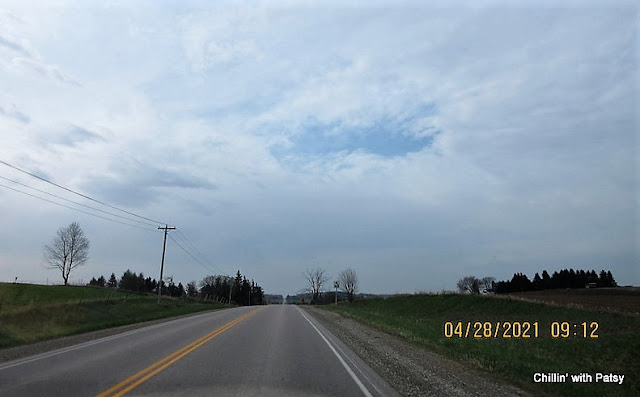 We had a bit of running around in Woodstock so I hid her gift in the sunroom while she was busy and took care of that. Almost 2 hours later, we returned and finished up what we went there to do. If it sounds like I’m being a bit secretive, it is true but it is Bill’s story to tell, not mine. Before we left, I placed a large poster board that I’d bought at an auction on their couch. I got the reaction that I was looking for. 😊

Bridgette loves and always has loved Jim Morrison of the rock band, The Doors. When I saw this come up, I had to bid, and bid and bid once more to win it for her. It isn’t really a birthday present, she was going to get it anyway but her birthday is just around the corner so why not? I got another excited hug for that and I have no doubt she’ll find room in their home for him. Chris won’t mind. Teehee. We said our goodbyes and drove the 2-hour distance home.

We stopped in Hanover for another errand and a late lunch at A & W, during which I saw Donna walk by on her way to the drug store. That was purely coincidental so we chatted briefly before we were headed to Durham. One more stop in Durham and as I was driving on Baptist Church Road, M called to see if I could work a few hours on Friday morning. Yay! Sure can!

We’d eaten a big lunch at 2:30 so won’t need supper. I blended the Jell-o and cream cheese mixture so we could have that for dessert later if we wanted to. Bill made us a cup of tea and we relaxed together. I did get my pictures downloaded and my blog written so that was a start. Around 6:30, we wanted a nibble so had some toast with peanut butter and/or apple butter. I had a piece of each and then for dessert I had some homemade ice cream. 😊

I made it Keto chocolate ice cream and keto strawberry ice cream yesterday. I included a picture of the ingredients in a Mason jar in Tuesday’s post. It turned out great so I am happy to share it with you in case you’d like to try it. Many of us are ice cream lovers. The recipe says to make it in a Mason jar, of which I only had one empty one but next time, I’ll make it in a bowl with my hand mixer.

1 cup of 35% heavy cream, 1 tbsp cocoa, 3 tbsp powdered sweetener of choice, dash of vanilla. Shake for 5 minutes until cream begins thickening. (mine never did so I put it in the freezer anyway for 3 hours. Yummy.

For the strawberry ice cream: 1 cup 35% heavy cream, ½ oz (I used 1 tbsp) crushed freeze dried strawberries, 3 tbsp sweetener, dash of vanilla. Shake and freeze for 3 to 5 hours. You won’t regret it. After the second day in the freezer you have to let it sit for 15 min. to scoop it. 😊 You’re welcome!

Bill packed his lunch and then we did dishes before working on blogs again. I’m hoping he is writing one tonight, to fill in the blanks from today. This was a wonderful day that couldn’t have gone any better. We had rain and stormy skies here, a couple of times apparently, while we had nothing in the part of southwestern Ontario where we spent the day. Temperatures reached 18C/68F and humidity was high. 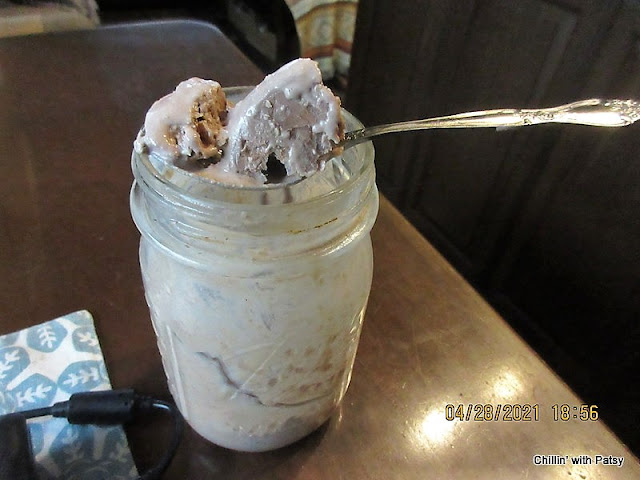 Good night!
You can read between the lines by checking out Bill's blog here

Thank you for stopping by! Your comments are always welcome.