Thursday, Apr. 1st arrives with a flourish, just not a lamb-like one. I know that idiom is for March but I’m hoping it will work for this month as well. The snow was 2 hours late arriving, from what our meteorologist told us last night, but she was bang on for when it stopped. We were up at 7 and by 7:15 the sky was white and by 7:35, so was the ground. Good grief!

We sat and decided we’d be ‘stuck’ inside today with the freezing temperatures while drinking our morning brew. We read blogs and discussed the day. Outside, by 10, the snow had stopped and the winds moved in with ‘gusto’ to take it away. We didn’t figure it would stick around long as the temperatures go up from here on in, at least to normal expectations. My brother, Michael, in Cold Lake, Alberta is sending his 14C/58F our way. 😊

Bill had some purging of his own to do so worked away in a couple of cupboards, in the living room and in the bedroom, getting rid of a lot of loose cables and connecting cords from past electronics. Why we keep stuff like this “maybe we’ll use it”, I’ll never know but we do it anyway. I discovered, in my rummaging, my old MP3 player. I used it a lot back in my working and walking days in London but it quit working a few years ago and got tucked away.

I tried a few different things with it but it has ‘retired’ too, I guess. Out it goes. If I ever want another one, I’ll buy one. We had a few phone calls on our list for today so took care of those throughout the day, leaving messages for most. One important one, well, they were all important, was to Murray who is storing Bill’s cargo trailer. He’d like to get it out tomorrow morning and get it home here on the Ridge.

The snow started up again at 1:30 along with the winds so we don’t expect much accumulation this time. We’ll see, it looks to be blowing straight across from north to south. This does make the Suite a bit harder to keep warm, with all the windows on that side facing out, but we seem to have a handle on it. Still no regrets for coming home when we did. 😊 I’ve texted back and forth with Jamie and hope to see him on Sunday for a bit.

We had breakfast of bacon and eggs for lunch and that went down well. For supper, I’ll spruce up the dry sausage casserole somehow so that will be relatively easy. After getting my blog started, I had my shower and walked out to see what Bill was up to. He had spread a bit of gravel to see how hard that would be and then we both came indoors to the warmth.

It was around 2 when Bill went upstairs to purge clothes. I found my blanket, my new James Patterson book, ‘When the Wind Blows’, and my chair with no intention of moving very far for the next hour or two. Bill doesn’t think the mail lady stopped so I don’t plan on going out even for a walk to the mailbox.  I wasn’t in my chair long when Bill indicated that he wanted some help (opinions) upstairs so I went up on the bed and helped him choose.

He was doing well; the shirts were piling up and the space in his portion of the closet was opening up. He finished that section and will work on another area tomorrow.ish Later, when we sat in our chairs, I had a tea and Bill had a Zero Coke. He’d barely finished it and I heard him sleeping. Literally, within 20 seconds. When I told him later about how quickly he dropped off, he agreed. “I was tired, all that emotional sorting upstairs”. Now THAT was a good one!

I got well into my book and I’m enjoying it a lot. At 5:30, I got the leftover casserole out of the fridge and blended some soup and cream. With that mixed in and carrots on the side, it tasted much better to me. It was more like a stew by now so Bill had toast with his and at least that finished it off. We had the last of our caramel custard for dessert and had dishes done by 6:30. The news isn’t good here in Ontario. Well, depending on how you look at it, I guess.

Our Premier Ford has announced a 3rd province-wide lockdown starting on Saturday at 12:01 am. Darn!! I’ve never agreed with the total lockdown, especially now that all venues know how to deal with business in a safe manner. I don’t believe that the new cases are as a result of them being open but again, it is from certain reckless individuals in over-populated areas. This is just my opinion. Ontario will be locked down for 28 days. ☹ 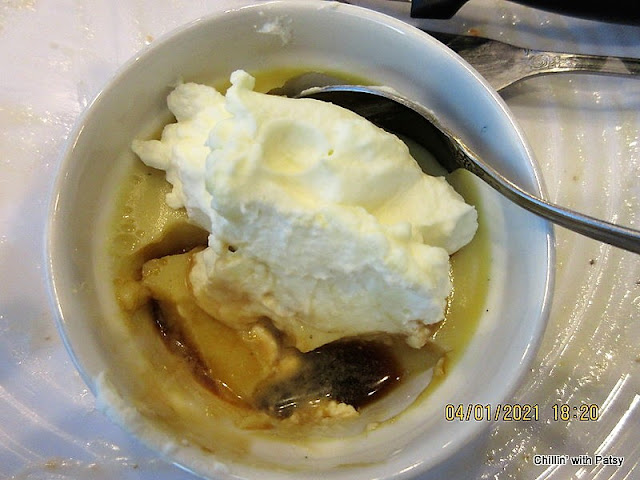 Bill was off today; they finished their job yesterday and won’t start a new one until Easter Monday. I will be going into the laundromat on Good Friday and then off for the weekend. I’m not sure if I’ll revert back to every other day or stick to week days only. I’ll talk to Jamie but I’m sure he’ll leave it up to me. The sun came out around 5 and the snow has pretty much disappeared. We are all ready for spring to return.