On Friday, Apr. 23rd we woke to sunny skies. Even though it was only -2C/28F, we knew what the projected forecast was going to be. Bill went off to work, but because they’d be working outside, he remembered to grab his overalls from the Bunky first. They were working on a deck cover/awning for the Bunky they built last summer. Murray is a friend and likes the work Mike and the boys do. 😊

On my agenda today was a morning drive to BizyBee Auctions near Elmwood. Between Bill and I, we each won the bids for 5 items so I was going to pick them up. On the way, I stopped and dropped my cousin’s last puzzle off on their porch. No one was home but I messaged Harvey to let him know. I arrived at my destination 15 minutes after they opened and that was perfect.

The owner was quick in providing me with our goodies and then accepted the clothing and bedding that I’d taken along for another upcoming auction. It would be nice to make a bit of cash off them but we’ll see. On the way home, I followed ‘old faithful – Concession 8’ to Murray’s road and stopped in to see the guys. Mike, Billy, Bill and Murray himself were all busy working but turned things off and took a break when I walked in. I thought that was kind of nice.

I didn’t hang around long, letting them get back to work. It was a perfect day for them to be working outside, along the river. When I left there, I turned right to the bridge, just to take pictures. It is closed to traffic and I’ve always wanted to stop. 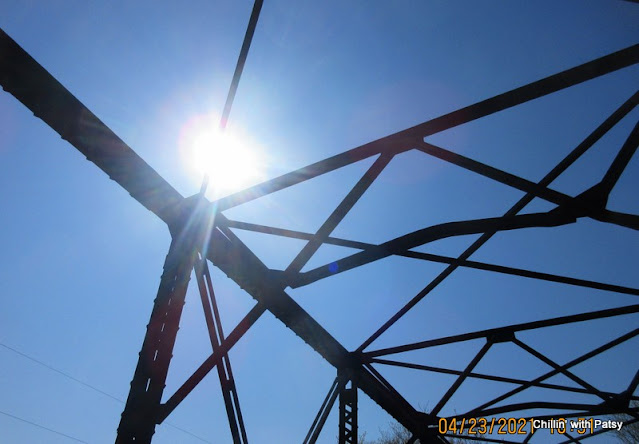 After a couple of photos, I drove home. I made myself a coffee and a breakfast wrap of bacon, ham, egg, cheese and lettuce. Yum, that hit the spot! Then it was time to get to work.

Finishing up as far as I could (or wanted) to go today, I put things away and poured myself a Bailey’s on ice. With a new James Patterson book to read, I moved outside to the picnic table. No sooner had I sat down and Bill drove in the lane. 😊 I hope he didn’t think I’d been sitting all day! Ha ha. No, he knew I’d been busy after I showed him the garden. Eventually, we both moved inside.


It was 4:30 and soon after sitting and going through our purchases, Donna texted. They brought the filter for their water pump and so we popped over so Bill could install it. What can I say? The sun was nice, the beer was flowing (between the guys) and the company was better than both. Before we knew it, I noticed it was 7 o’clock! My how time flew!

We had filled our water bladder but I knew that Bill shouldn’t be driving home. Seldom does he let loose and have more than one drink so I was happy to step in and drive. I had planned on bbq pork sausages for supper but by the time we walked in the door that was abandoned and we had fries with some warmed corned beef instead.

We needed to plug into electric power to cook the fries and our tv ‘burped’ when I turned the inverter off. We’d been on solar power all day but it took a long time for Bill to get it back. Weird, it took shutting the satellite and the tv off for about 20 minutes. That’s never happened before but we’re just glad it returned to normal functions.

After dishes, we watched some tv for the evening. I felt too tired to get into a book so this was just fine for me. I worked on my blog and downloaded the day’s pictures. I had a wonderful day. Oh, a dress, an outdoor rubber mat for the Bunky, a second full RO water jug with a pump along with my garden edger were my bounty for the day. I thought you might be curious. 😊

Have a great night and thanks for stopping in for a visit. Spring has returned!

Posted by Patsy Irene (Chillin' with Patsy) at 8:31 AM