A Bit of Shopping, Some Disappointment That I Can Live With

On Wednesday, Dec. 8th, we knew we wanted to go into Yuma for a bit of shopping. It was looking like a lovely day when Gibbs and I went out at 7.

These are stores we love and the first time perusing around is always fun. I was doing Christmas cards today so needed international stamps so on the list first was the Post Office. Next because we wanted cash for a trip to Los Algodones, we stopped at CVS. They have the AllPoints ATM machines that don’t charge us for withdrawing cash from our RBC US account. Not all CVS have them, we don’t think, but many do.

After doing that, we went to Fry’s grocery store for a bit of stock up. There were a few things on the list and we found everything. 😊 I’m going to give a new yogourt a try. I’ve never found anything with a higher fat content than 6% down here so am always disappointed in the taste.

I like the flavoured yogourts but prefer to bypass them because of the sugar content in them. This one isn’t clear how much fat but it looks like 12%? We’ll see what it tastes like. I’m almost out of my 11% from home so had to find something.

We wanted to stop at the mall where Harbor Freight is, Bill had his eye on something in there. It’s a pretty good store for the guys and sometimes I like poking through it as well. They have great offers and often ‘free’ stuff. Who doesn’t like free? I didn’t go in today because right beside it was the .99¢ Store. That’s what it’s called and everything ends in .99¢ but many items are no more than that. That's where I went and I found some canned goods, Christmas cards and a couple of other food items.

Bill made one more stop at his Hobby store and then we headed home. At the office, he had a delivery already so that was good timing. 😊 I felt tired but believe it was just hunger since we’d both only eaten yogourt earlier and it was noon hour already. Gibbs looked after the house for us and did a great job. We agreed on sandwiches for lunch, so Bill had egg salad and I had a meat, cheese, lettuce wrap. It was very filling with my coffee. 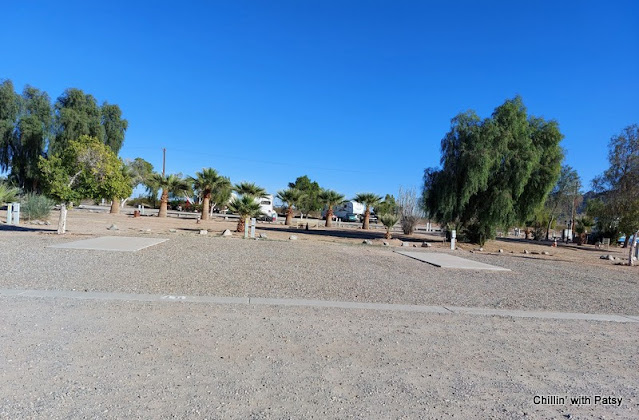 We each took Gibbs out for walks through the course of the day and at one point I walked up to the puzzle room while my sweeties dozed inside. The pool has been covered both times I’ve looked and the puzzle room door was locked. ☹ I asked in the office about both to discover that they will uncover the pool if a guest wants to use it. (?) Something about keeping the dust out. Strange but ok.

Secondly, the puzzle room is ‘under repair’, since the roof was leaking but all the puzzles are in there so when he suggested that other campers use a table in the clubhouse, it didn’t much make sense. Did I bring a puzzle with me? Crap! A disappointment settled over me and I’m thinking that some of the reasons why I love coming here are just going down the tube. No mention of how long the room will take but the manager didn’t seem too concerned.

I walked back deflated, but at least I’ll have the pool so he better get used to uncovering it and covering it back up just for me! 😊 Back home, I finished writing Christmas cards and we agreed that we have addressed all that we’d planned on sending. That’s a good job done. For supper, it was a ‘bagged meal’. We’d bought a roasted chicken at Fry’s and I opened a bag of Bacon Caesar salad to go along with it. Nice and easy and leftovers.

Bill isn’t keen on the chickens (chicken in general) so I appreciated that he agreed on it to help me out with supper. Happy wife, happy life, right?

After Bill did dishes, I fed Gibbs and took him for a short jaunt while I snapped photos of the pretty sky over the fence. This was a nice day and we are happy to be settled here for the time being. We planned our day tomorrow as we watched a couple of our television programs. It was a quiet evening together. 💖 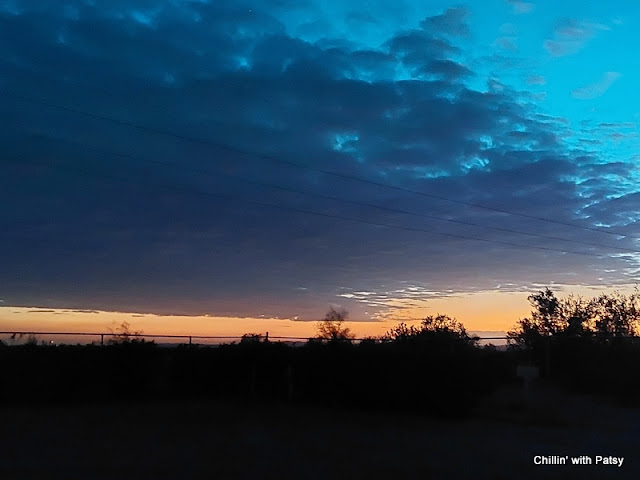 Posted by Patsy Irene (Chillin' with Patsy) at 8:15 PM