What Did we Do Today?

Saturday, Dec. 4th we slept in until a few minutes before 7. Bill took Gibbs out and I got up and made the bed. When he mentioned having a bit of a light headache, I took Gibbs out to the dog park for small dogs at the east end of the resort. 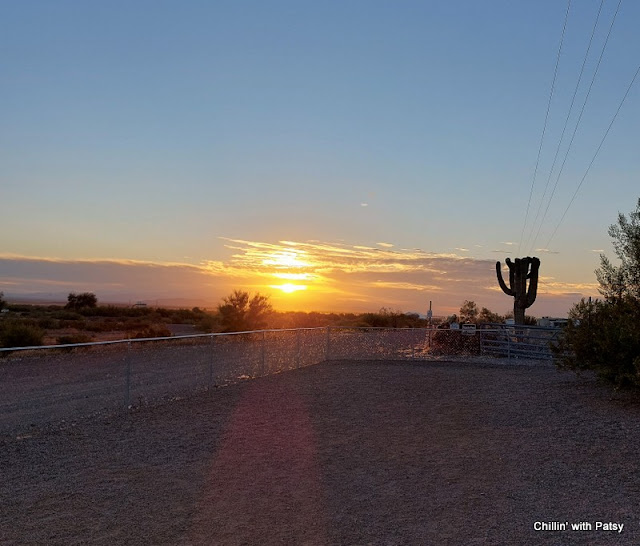 There were no other doggies there to play with but for his first time, that wasn’t a bad thing. He wandered at his own pace, sniffing around the evidence of previous inhabitants.

We raced back and forth so each of us got some much-needed exercise and then crossed to the ‘bigger’ dog park. Same thing, it was empty so we went in and he did some more sniffing. As we were leaving, we met a large dog so it was good timing.

Next time, perhaps he’ll meet a new playmate. 😊 Back home, I made my tea with a bowl of cereal and finished yesterday’s blog. Bill’s headache was a bit persistent so I left them alone at 9:30 and went to the puzzle room.

There was a winter puzzle started the other day which I’d worked on a bit but the border wasn’t fitting together properly. So, today, I removed a finished puzzle and spread all the pieces out across the table in search of more edging pieces. I only found one and when it still had gaps, ignored the spaces and began working on Mr. Snowman’s hat. Something just wasn’t right but would fall together eventually.

It was a cooler morning, 46F/8C, with a breeze making it feel cooler still but it was nice inside the building. I knew it was warming up to 77F/25C later and the sun was brilliant in the clear blue sky. So far. At 11, I came home to see how my sweetie was and it wasn’t long before Ken pulled up in their golf cart. We’d made a plan yesterday to go for a ride today but no time was set so after we had lunch we’d head out. Bill had a sandwich and I finished my leftover enchilada w/rice. ♥

Today, our adventure took us to the City of Eloy Municipal Airport, just 15 minutes down the highway. This was a real treat! A bird’s eye view of skydiving, single and tandem. I’ve never seen anything like this, close up or any way but on tv. We had front row seating behind the spectator lines so we set up our chairs and watched the show. Approximately, 10 divers per plane and when they dropped from the sky, it was great fun to watch! 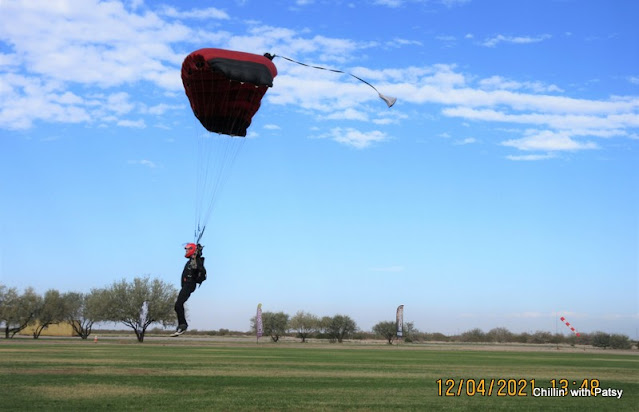 Various ages, genders and levels of expertise dropping almost non-stop for an hour and a half. There were white fluffy clouds in the sky by this time and it only added to the brilliant colours of their chutes. I loved it!

Some landed on the run

Others landed on their butts

I'd think tandem jumping is

something I could do!

We left there and drove then to a very odd shaped building where Indoor Skydiving was taking place. As spectators we only had to sign a liability clause to get in and watch others gearing up and stepping into this high-powered wind tunnel. No parachute required. 😊

There was a sign outside a different building that said no videos or pictures so I wasn’t sure if that applied. I played it safe and didn’t take any. Instead, I used their own pictures from the webpage. 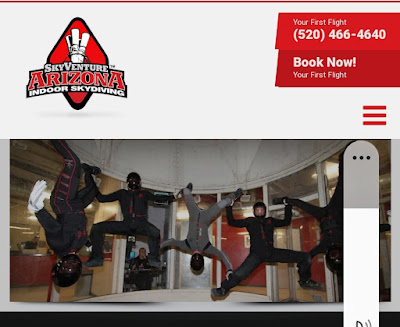 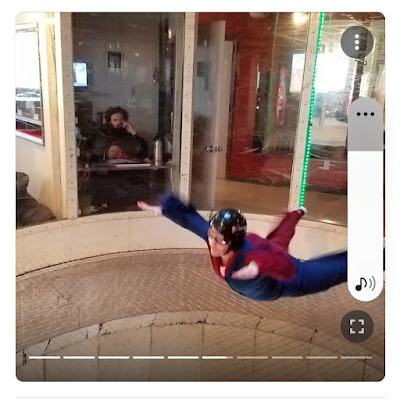 After enough of that, we came home into a mass of clouds. The Suite was nice and cool and I noticed as we drove by that there was no one at the pool.

Bill was tired so went up with Gibbs for a nap. It was 4 o’clock so since we’d planned a simple supper tonight, I sat to work on my blog. LOL, all that I’d written before lunch was lost in cyberspace so I began again. I was sure I’d hit ‘save’ but apparently not. ☹ Then, I sat with my book, hoping to get into the story. This one is called The Book of Lost and Found by Lucy Foley. Maybe after supper, I’ll go back and work on the puzzle.

I had small sausages (actually baby ones) for supper and Bill suggested eggs so since we didn’t have them this morning, it was a plan. I made poached eggs, toast with the sausages and we had ice cream for dessert. ♥ It was plenty to eat and the eggs done differently was a good choice for a change. As we were doing dishes, our friend and fellow rv’er, Nancy, called for some information from Bill. 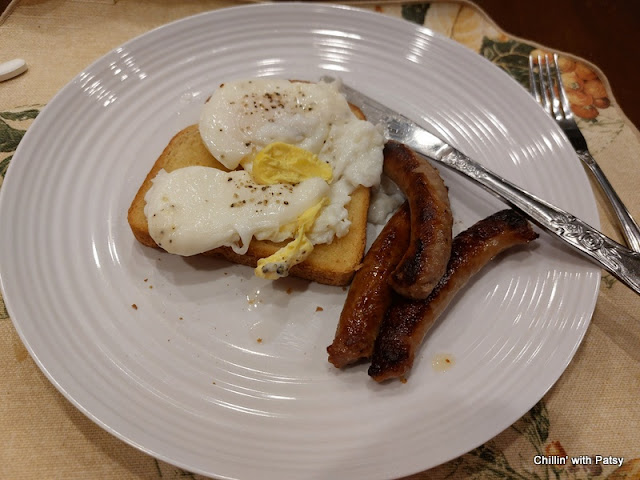 I shooed him out of the kitchen sink, well, his hands, and he went outside for an easier conversation while I cleaned up the dishes.  Gibbs hears a voice on the other end of the line and looks for the person. That means some barking and jumping up on Bill so it’s best to take the conversation elsewhere if we can. 😊 It is so nice to hear Nancy’s voice and we’ve made some tentative plans to meet up down the road.

As for going to the puzzle room, I think I’ll do that once I finish my blog. I don’t know if the buildings are even open and for how long but I’ll find out. This was a fun day, they just continue to stack up. Yay!

Update: I didn't finish this last night, Picaso was not being kind to me and with the lights on in the puzzle room, the glare on the pieces of puzzle were too hard to work under.

Thank you for stopping around. Your comments are always welcome.