A Little Shopping, Meal Planning, A Little Nothing

Up On The Ridge
At 5:30 I woke up on Tuesday, Aug. 20th. Too soon to get up so I moved over and curled up with my sweetie until 6:15 when I got up for work. Sleeping Beauty stayed put for a while and I gathered my keys, water and slipped out the door.

I was surprised to see that the Mat was in pretty good condition! Jamie had been in last night, I could tell. The floor had been swept and some recycling cleared out and stacked in the Lock Up room.

The bonus of him popping in at night is that the doors are locked until 7 am and I do appreciate that. Looks like he finished some of the cream paint on the front and it looks great. Brick is hard to cover unless you spray and red brick covered in a cream colour is harder still. He’s done a nice job. I finished my work in an hour and moseyed on home facing the brilliant sun to the east.

Bill was outside working on our water pump. He’d been over to the Acreage and got a bladder of water already. I figured he wouldn’t stay in bed long. One of the cables/wires to the pump had snapped off so he had a wee repair job to do before transferring water. After he filled our tank, we washed up and drove to Hanover for some shopping. We try to pile a lot of stops in when we’re going that way, to make it worthwhile. Still it is only 15-20 minutes so not ridiculous.

First, a stop at Walmart to pick up a couple of things and we lucked out with 2 quilt sets. We need this kind of material for his wing covers and unless we go to a fabric store, we weren’t going to find it easily. I suggested a comforter and we found these instead on sale for a great price. This is exactly what we need and between us, we’ll make a safe way to transport the wings. The material pieces are a little bigger than what we need but it is better to have extra than not enough.

Next was Canadian Tire. Bill wasn’t having much success in finding some things he was looking for, not today anyway. He did pick up 2 of his items and then we moved down the row to the Independent grocery store for Zero Coke. Only place with a decent sale price and we needed to stock up. Finally, we topped up Ptooties with fuel and headed home for breakfast/lunch. 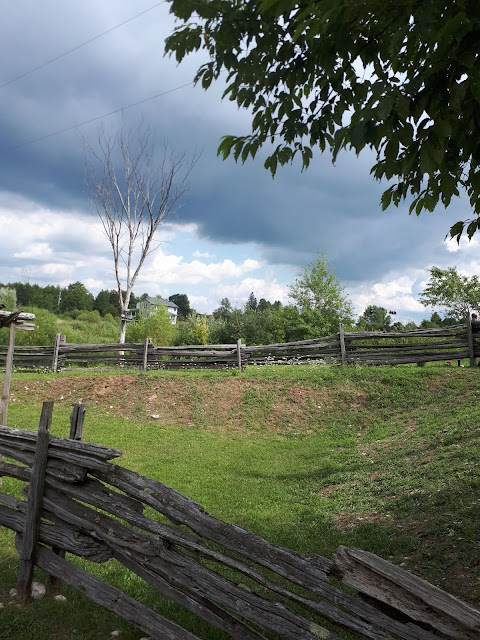 I made us an omelette and he had his on rye bread, which he has now agreed to buy instead of whole wheat (tg) and I had a half quesadilla. Bill got called in for work tomorrow and Thursday so he is happy about those hours. It will sure seem weird having him leave in the morning but he should be home in good time Thursday afternoon. Before we left for town, I made up a bowl of Jell-o. It is time for some more creamy desserts. After dishes I had a wait time for the cream cheese to soften.

Bill took a quilt down to see how the wings fit so I walked down to check it out. Wow! This is great because not only is one going to be enough, but we can use the second one for his Giles plane. I came back up and mixed up the cream cheese and whipping cream. After blending it with the Jell-o, which had set nicely, I put it in the fridge. The forecast for this afternoon, according to the station I was listening to at the Mat this morning, is for possible thunder storms. Hmm, weird, there was no sign of it on AccuWeather.

Now, looking outside, there are black clouds moving across the area. Overhead, and all around us. Just in case it amounts to nothing, I watered our hibiscus really well and admired the 6 new blooms. Bill said the leaves look wilty so I need to stay on top of that. I don't want to lose this beautiful plant. No sooner did I type that and I had to run out to close the windows in the Bunky. We had 5 minutes of rain before the sun and blue sky returned. Good thing I watered Hibbs.

I started a James Patterson book last night, The Postcard Killers, and within the few intro pages, he had me. So, I sat and enjoyed a few chapters of that while trying to contemplate what to have for supper. Worst part of the day, in my opinion, trying to come up with meal ideas. The same thing over and over is not our style but it is really hard some days to be creative sticking to a suitable diet, one we’re trying to commit to.

I didn’t waste too much time on our supper menu, finding a pack of mini sausages in the freezer made the decision easy. We had a head of lettuce that needed to be eaten and plenty of garden veggies for a salad. We both agreed on the simple meal and even though Bill offered to fry them outside, it was quicker to cook the little sausages in a small fry pan indoors. I also boiled 3 little potatoes for his supper meal tomorrow night with the leftover hamburger mash.

We did dishes and Bill went out to dump the gray water tank. He’d brought our cooler inside and I started filling it with the foods he’ll need. The rest of the evening for me was spent in front of the tv and Bill took care of his shower, allowing him a bit more sleep-in time in the morning. This was a nice day spent together before he disappears for a bit. We watched America's Got Talent before I called it a night around 10 pm.


I’m nervous about running out of wifi by posting tonight so I'm going to wait and post it in the morning from the library. At least you’ll understand why you won’t see a post every day, I'll probably only post every second day. This is going to be a habit for the rest of the month, Woe is us until our new data month kicks in.

There wasn’t much rain and certainly no storm crossed over us. Tomorrow could be a different story so Bill got all things closed up and locked down.

Posted by Patsy Irene (Chillin' with Patsy) at 8:46 AM