I woke up at 5:30, happy to be able to still lay in bed for a bit longer. It was a great sleep and although I could have stayed put and slept longer on Sunday, Aug. 4th, I got up at 6. Getting back into the routine of cleaning the laundromat was today’s priority. Bill pulled a lower back muscle while swimming so was moving slowly. I gave him a couple of muscle relaxers and left him in bed.

The back door of the Mat was propped open again but the front door was locked. Of course, this meant that I was battling flies as I went about my job. Working right to the minute, it was an hour later that I walked out. I’ve made a mental list of a couple of things that I need to pick up at the Home Hardware before going back on Tuesday. Before leaving, I made sure to update my chart in there as Bill hadn’t done that for his days.

I love to see empty parking spaces (why not at 7:30?) so I could park on Main St. directly across from the Royal Bank. Durham is always so busy during regular business hours. I had some money from Ladyfest that I didn’t spend and wanted to deposit it before heading home. The white fluffy clouds were hovering and after returning home, seemed to fill the sky covering a lot of the blue. It is going to be another nice day around 75F/26C.

Bill moved down to the Hangar to work on covering the tail of his Telemaster and I had my tea and read some blogs. Sorry, I’ve been lax. Around 10, I made us each a nice fluffy omelette and told him that I would take care of dishes. It didn’t take him long to see the two ingredients on the counter (peanut butter and cream cheese) and he said “Ooh, Fat bombs!” Can’t fool my guy! So, I made up a double batch of the ‘dough’ and put it in the fridge for 2 hours.

After dishes, I made a B.P. coffee and then went outside with a pail of soapy water. Our patio chairs are pretty dirty, mostly from sitting under the little tree so I scrubbed them with a Lysol cleaner to spruce them up as much as I could. The backs and under the seats turn green from sitting out through the summer heat and dampness and I was surprised that even that cleaned up really well. I won’t say they look like new but they look so much better.

That was more exerting than I’d originally planned on so I sat in the shade of the patio, on a dry chair. I dumped my kitchen compost pot and while up there checked out my garden. It looks good but probably needs a good watering tomorrow. Lots of tomatoes coming and peppers.

The biggest surprise was to see that there is a pea sized watermelon on my plant! Yay! That is exciting! Bill’s sister suggested that I create a plastic tent over it to induce more heat so that they will produce fruit quicker. I would like a sampling before we have to pull out in November.

At 12:30 Bill was tired from the finite detail of covering the tail of his plane so came up for a snooze. He must have been kaput as he dropped off really quickly and dozed for about an hour. I finished my Fat Bombs, rolling 65 before placing the cookie sheets in the freezer to solidify. It was around 2:30 that we packed up and drove over to the Acreage to spend some time with Donna, Gerry, Mike, Gayle, John, Ted and Joanne.

Us girls worked on a crossword puzzle with a bit of feedback from the guys and then Gayle, Donna and I got into a game of Scrabble. The afternoon went by in the heat of the sun and clouds and before I knew it, Bill was suggesting we get going as it was 5 o’clock. I finished the game in second place and we headed for home. At home, I placed the bombs in ziplock baggies and put them back in the freezer for snacking. They will last us for quite a while. Tonight, supper will be simple. We like simple.

Although Bill wasn’t hungry when I was at 6:30 so I just had a leftover sausage warmed up and the last of Krystal’s broccoli and cauliflower salad. He came up later for something of his own choosing.We might have some ice cream together. Such a lazy day it has been and we both needed that even though we still managed to get some things done around here. 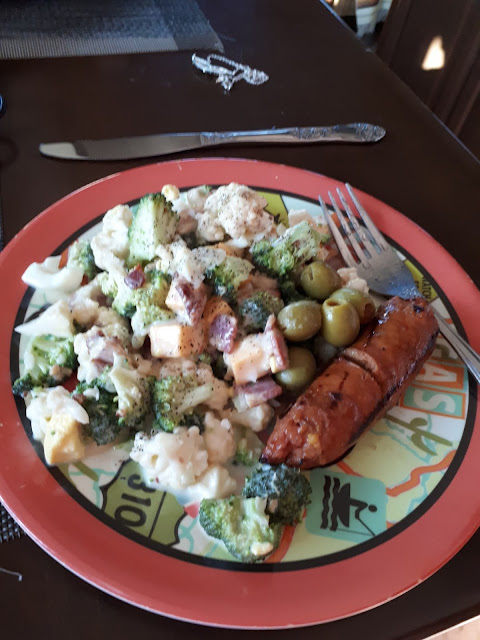 We each have a few little things to complete before company begins arriving on Wednesday so I jotted them down for my own purpose. With tomorrow being a holiday, we won’t be doing the shopping part of those errands until Tuesday. That means the things around here can be worked on. What a beautiful summer we are having! Just the kind we love.

The evening was quiet as we did our own thing. I watched part of The Pirates of the Caribbean, Curse of the Black Pearl and then Dead Man's Chest came on next. Gotta love Johnny Depp. 😊 Eventually Bill and I came together inside after the sun went down.

It was a wonderful day! I hope you can say the same. Thank you for stopping by.