Long Day Trip with My Girl, Campers Arrive at the Ridge

The Ridge
On Wednesday, Aug. 8th, I was up at 6 and in the shower immediately. By 7 I had eaten some cereal, had my tea and was dressed and ready to leave. Today, I was meeting my daughter to go to a visitation, 123 miles west. I was disappointed to see the cover of thick white fog across the land. Bill checked the lights on Ptooties so I knew how to turn the fog lights on and I pulled out at 7:15. 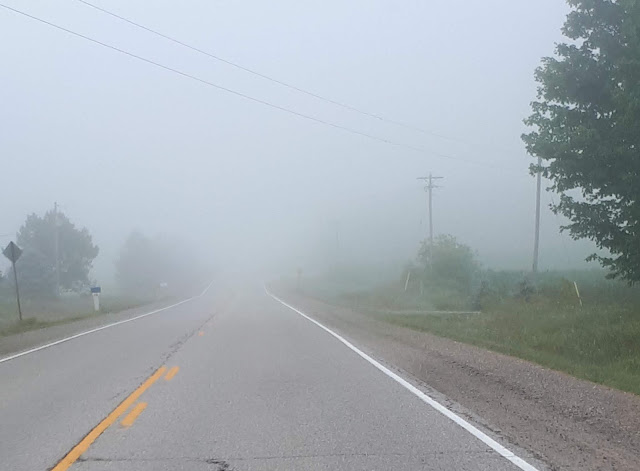 Visibility wasn’t too bad and I relaxed once I got out onto #6, away from the ‘deer crossing’ concerns. The drive was uneventful, listening to my tunes, keeping an eye on the map Bill printed for me. I’m good getting to Stratford but I wasn’t going in that same direction, having to go through Shakespeare, Tavistock, Hickson so those were things I needed to pay attention to. It’s familiar once I get there but I can’t picture turns in advance. My GPS takes me a way that I don’t want to go.


I arrived at Tavistock at 9 and that was too early, with only about 10 miles to Bridgette’s. With a taste for one of their creamy steeped teas and need for the facilities, I stopped at Tim Horton’s right on the corner. Then I drove the short distance and parked Ptooties beside her unlicensed little Mini Cooper, Bixbe. We dawdled a bit (because I was early, as usual) and she quietly showed me the beginnings of their bathroom reno.


Oh, and I got to meet Jack, their stray kitten. Chris is on midnights this week so was sleeping after working until 7 am this morning. Not a pleasant shift at all especially just coming off afternoons! Bridgette drove us from their home in her new Jeep and it was a much more pleasant ride than Bixbe would have been. I’m too old to get in and out of low vehicles. 😊

Travelling the 401 highway (Interstate-like for our American friends) is nothing to my daughter, she has always used it for quick access to and from her jobs. Arriving in West Lorne started to bring back memories. Bridgette’s first home (on her own) was here and we drove by on the way to Rodney. Talk about memories, they came flooding back as we slowed down for me to take a picture of the beautiful home I once owned. That was 1984 – 1989 and a different spouse and a different life.

Fran Wight was the neighbor to the left and in 5 years, the 4 of us became closer than 2 couples could ever be. It was a period of games, drinking, walks, dances and parties and most without leaving our own properties. I remember them fondly.


When we walked into the Funeral home on Main St. there were familiar faces but not likely. I kept wondering if I should know them but I really didn’t get involved in the town. I drove 45 min. to London daily for work, didn’t shop in Rodney and didn’t socialize with anyone other than this small group of friends/neighbours. We didn’t need to.

Seeing Fran’s daughters after 30 years gave me many ‘oh my God’ moments. All grown up with families of their own makes me realize they are my kids ages too. It was when we walked up to Rob, our goofy friend, Rob that we really lost it. He grabbed both of us together in a 6-armed hug and didn’t want to let go. We were the last people he expected to see, not even knowing where our paths had taken us. It was one of the most special moments I can recall and will not forget.

We hung around a bit after signing Fran’s coffin (what a neat idea!) and watching a video of pictures. I was thrilled and yet surprised to see that I was included in a couple of them. I got goosebumps for being included in the memorial. After being told by a handful of friends from the past that I hadn’t changed a bit, we felt we could slip out before the ceremony. Bridgette and I chatted non-stop on the way back to Woodstock and it was truly a wonderful visit together.

When I left her place, after perusing her gardens and naming some plants for her, I texted Bill that I was on my way. I thought I’d be more tired from the early rising, the drive and back again but when I drove in to see Kim and Ken as well as George and Suzie had arrived, it was my second wind. I joined the Happy Hour with a Diet Gingerale, afraid of what alcohol would do to me without having eaten much.


At 5:30 we had some sweet corn (thanks to G & S) in Madame I.P. (thanks for the suggestion, Kim) and leftover farmer’s sausage. After dishes, Kim and I drove around the corner to check out a Yard Sale and after half an hour listening to ‘Elvis’ aka Ivan aka Mitch tell us stories in between wheeling and dealing, we came home to make Bill happy. A new screened dining tent, a sprayer and a pair of truck ramps were in the hatch.
Bill had started a campfire by the time we returned and Rob and Pat drove out to join us all for the evening. Obviously, I was not in a blog writing mood. Could the day get any better? Even with the sadness of the visitation, the moments spent reminiscing with my daughter were second to none, I wouldn’t change the day in any way. I hope you enjoyed yours as well.


Thank you for your visit!

Email ThisBlogThis!Share to TwitterShare to FacebookShare to Pinterest
Labels: campers arrive, Day with my daughter
Location: Rodney, ON N0L, Canada