The Ridge
I woke before the 6:15 alarm on Sunday, Aug. 18th but dropped off again and it was necessary to wake me up. Even waking up to my chosen Tango music can be rude when you are in a deep sleep. We both got up, I think Bill was already awake when it went off. He made his coffee and I headed out the door with a bottle of water. I was curious to see if the new key Jamie gave me for the Mat was going to work for me.

Yay! A much easier entry with this different handle and I got in before 7. I found one washer that needed a good cleaning so I used the change from another machine and set it to wash. Down the same row, someone had a note on another machine saying “Don’t use me” with no explanation. I saw a bunch of dry soap crystals in the bottom of the tub so set this one to wash as well. It seemed to be fine now. Maybe it is a temperamental one so always good to test them. 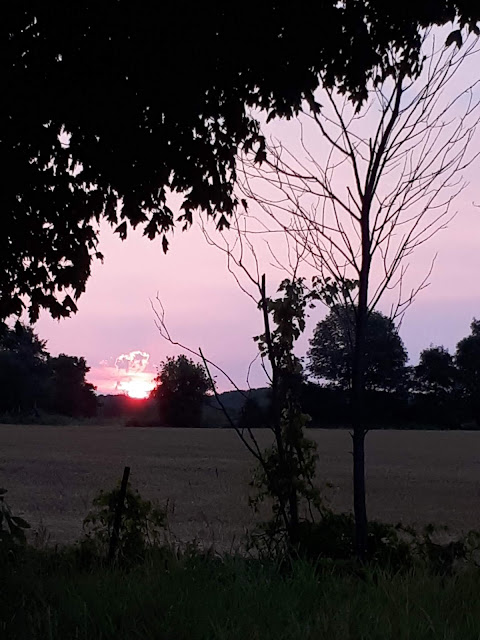 Two patrons came in during my hour and we chatted idly as I worked away. The lady expressed concern and disgust over the use of Mat washers for dog owners. I encounter one machine every week with the same long dog hair and it is terrible. No consideration for the next person as it is up to me (or the next user) to wipe it out before using it. She asked if I could put signs up to deter this happening. I said I would try but we all know that the ‘offenders’ don’t read or heed signs.


So, back home, the sun looked promising so I unplugged from electric and turned the inverter on. We used the 30-amp power most of yesterday with cloud cover and then for my cooking indoors. Bill was working down in his cargo trailer this morning. He’d bought some wood to alter the inside so he could transport his big Telemaster safely, when the time came. He is good at that stuff and just needs to put his ‘head’ plans into play.

I had my tea, made him a coffee and then finished yesterday’s post. Sorry, readers, it was another late one. At 9:30 I made Bill’s bacon and eggs and called him up to eat. I waited until closer to 11 when I re-blended my smoothie and had the remaining treat. We had some Red Lobster cheddar biscuits (from a mix) leftover from last night so we each had one of those. They are tasty little biscuits. 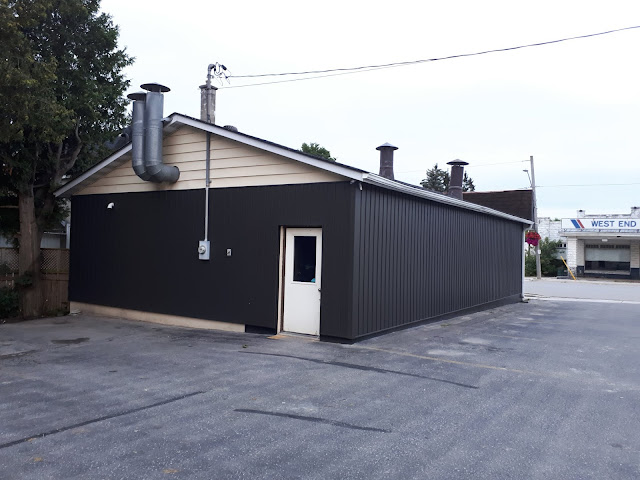 I wrote a bit on today’s blog post and then changed from my work clothes to go outside with my book. I used the sun sparingly and after checking with Bill, came inside for my shower. A cool shower, actually, the humidity is very high today. I sat in the shade of the little tree waiting for my hair to dry but soon moved back indoors. Since I was getting hungry for something to munch on, I figured Bill would be too so I cut us some cheddar cheese and zucchini bread and took a yogourt down to him.

He has our old Kool-a-tron in the Hangar so I know he has cold drinks when he wants them. It was around 3:30 when he came up and we discussed his ideas for making covers/holders for the large wings. He would need some stitching done with my sewing machine so needed to bounce his thoughts off me. We need to go to a fabric store so I located Fabricland in Owen Sound and we’ll make a trip there this week one day.

We each read some and then dozed and I seemed to lose all energy and ambition for doing anything else. Bill got a weather watch on his phone for rain coming and Donna texted me from Cargill that the had strong winds and signs of a storm approaching. I’m always leery up here on the hill with wind storms but at least I’m not alone up here. That would be worse. I closed the windows and doors in the Bunky just to be prepared.

It was about 5 when the rain started. The sky was black and moving in quickly from the west and northwest. Bill came up from the Hangar just on time and closed his shed and moved my painting into the outhouse.

It wasn’t attached securely enough to withstand the strong winds. The anemometer indicated 26 mph winds but within 20 minutes, it was all over including the rain. The sun returned long enough to give us a bit of a sunset.

I sautéed 2 Italian sausage links in Madame IP, something I’ve never done before and cooked them for 15 minutes with a 5-minute natural release. There were a few potatoes, carrots and some corn on the cob leftover from previous nights so I reheated those in the microwave. We also had 2 cheddar biscuits left and with butter, they topped the meal off. The sausage was awesome and I will definitely do that again.

For dessert, we had some of the ‘flop’ rhubarb crumble with ice cream and without expectations this time, it tasted pretty good. Other than my hour of work this morning, I had a very lazy day with lots of reading and some dozing. Bill was busy for most of the day but nothing too strenuous. I opened the windows again around 6 and let the cooler air in. We went from 85F (feeling like 95F) down to 71F so that is a nice drop.

I hope you got some rain where you are but no damaging storms. Thank you for popping in today. I love it when you take time to leave me a comment.