The Ridge
It was 6:00 when I slipped out of bed on Saturday, Aug. 25th. Bill was curled up beside me so I kissed him goodbye and was out the door for work before 6:30. It was a chilly start to the day again, only 8C/47F so for once I was looking forward to the warmth in the Laundromat. When I arrived, the back door was propped open and the front door not latched. All that told me was that Jamie hadn’t been around last night to secure things.

I was able to clean uninterrupted today, which seems funny for a Saturday. Remember when that used to be laundry day? The first thing I did was hang up the new signs I’d made. I had two of each and found appropriate locations on the wall and used thumbtacks from the corkboard to push them in. We’re all adults, right? Well, I hope they are left alone and gee, wouldn’t it be nice if they were adhered to as well.

There wasn’t a need today to do a damp mop but it had taken me an hour as it was to clean the washroom, washers and sweep up. The recycle bins take time too but soon enough I was outta there. 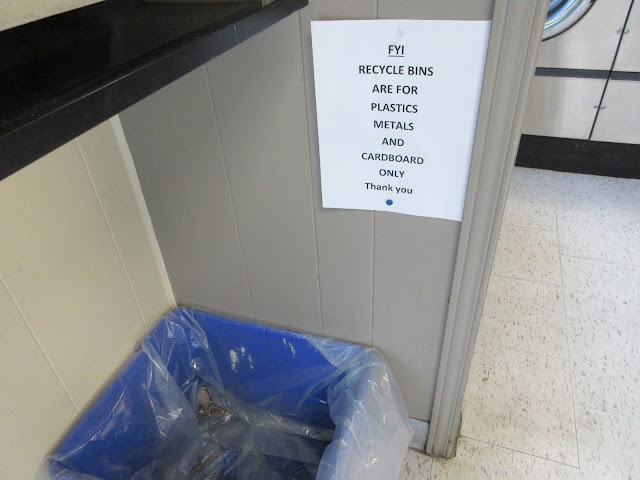 Back home, I had my tea and then set to work finishing with my apples. My sister, Donna, teased that I was ‘living off the land’ with my canning. Yes, I guess we are! It feels good to grow some vegetables of our own and make something of the fruits around the area.

The remaining apple mixture went back into a saucepan on the stove where I was able to add more water with more Splenda and spice to sweeten it up a bit. Good thing I am patient and persistent! 😊 Lastly, I decided that when the apples are cooked and warm, they are better to work with. So, I ‘canned’ the recipe instructions to cool first. I filled the colander 5 times and mashed and mashed until I had 3 full jars and maybe 3 more in the bowl. Woops! Now, I need more jars. 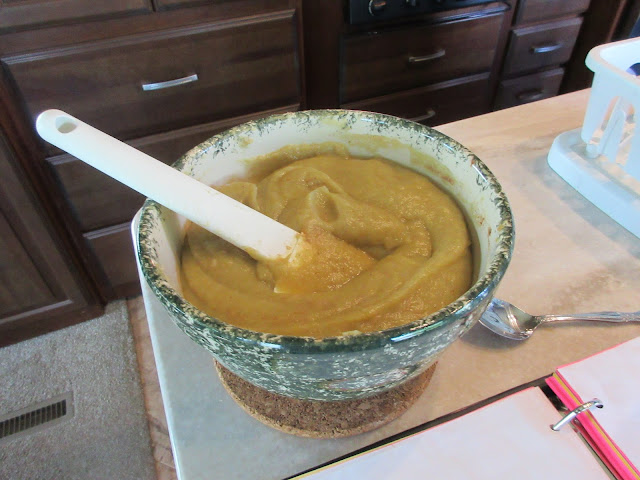 After cleaning up the messy applesauce dishes, I got myself cleaned up too and went into town to visit Mom. By this time, I had heard from Jamie with a compliment on the Mat. He said it looked great and that he loved my signs. I found Mom sleeping in the large sitting room right opposite the nurse station. I almost didn’t recognize her because she was sitting in the sun and her hair appeared much whiter than it is. Mom has more gray than white. Ashid told me that was where he left her.

I sat beside her for about 5 minutes before gently rubbing her arm to wake her up. I don’t know that she recognized me but eventually with our chit chat and giggles, she knew me as a daughter. We sat there for the whole visit and because I hadn’t figured out my self-timer on my camera yet, I asked Ashid to take a picture of Mom and I for me. He is a male nurse and one of the friendliest. He seems to enjoy Mom’s antics and also keeps an eye for where she is.

It was a 10-minute goodbye at her lunch table but a good one. She is very inquisitive at where I’m going, where I’m living, do I have a ‘man’ and am I joining her for lunch? Oh, she also wants to know if I’m coming back later today and it breaks my heart to say no, not for a couple of days. They always turn into 5 – 7 days but gratefully she doesn’t remember that. I had a nice time with Mom today and value each good moment.

On the way home, I stopped ‘downtown’ at our second-hand store, Going Once, Going Twice, to look for a few more sealing jars. She only had the old-fashioned traditional jars that require a rubber ring so I passed on those. I’ll figure something else out. Then, at home as we were biding our time for Loree and Roland to arrive, Jamie drove up the driveway. He seemed relaxed, not in working mode, so I invited him to sit and have a beer with us. 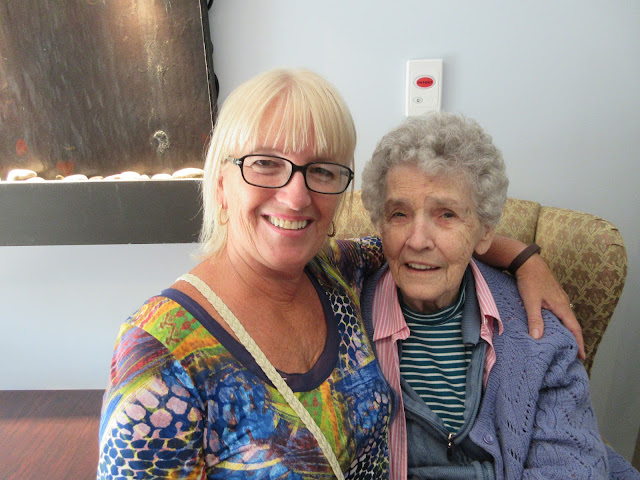 Within 15 minutes, we could hear the rumble of two motorcycles coming down North Line. As Lori pulled in first on her Victory and Roland followed on his Indian, I told Jamie that he didn’t need to rush off. I sensed that he was about to do just that. We greeted our friends with a hug and made introductions before settling at the patio table. The conversation went well and it was very cool to see Jamie fit right in. He knew the area of Dryden, their home town, very well.

After he left, we sat and chatted more until it was time to start making supper. I’d planned a blade roast of beef, small potatoes w/gravy and mixed veggies. The vegetables were done in a pot on the stove but everything else was a one pot meal. Perfect! The roast was the best size and potatoes and veggies were just enough for everyone without leftovers. I like that especially when my fridge is full. For dessert, we had creamy Jell-o which brought “I love Jell-o” from Lori so I did good!

The dishwasher is handy on nights we have company so I loaded it and eventually before the evening was over, turned it on. We sat inside and chatted and by the time we called it a night at 10, I knew we would both have a great night’s sleep. For one, I was up at 6 and even though it was a sitting around day for the most part, that can be tiring in itself. Also, Bill hadn’t had a snooze so that can only benefit his slumber through the night and early morning. 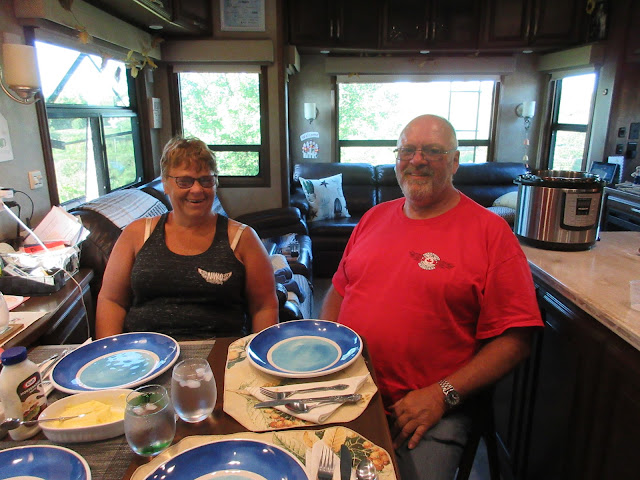 We had a great day. The sun was hot and the temperature rose to 74F up here on the Ridge. I hope you can say the same for your Saturday. 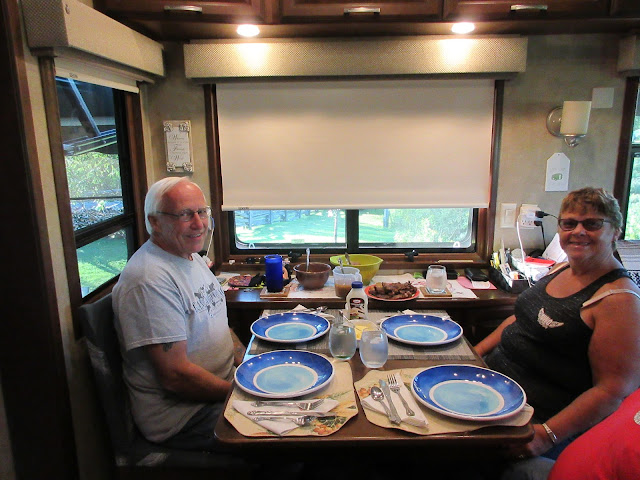 Thank you for the drop in. I love hearing from you if you care to leave a message. Wow, I sure rambled today! I apologize again for the late posts – it is what it is in our ‘no-data’ zone until the 31st.

Posted by Patsy Irene (Chillin' with Patsy) at 9:17 AM