Laundry, Keady, Last Happy Hour and Campfire for a Couple of Weeks

The Ridge
On Tuesday, Aug. 13th I slept until 7 and rose shortly after. It was a wonderful night and even Bill said he slept well as well. Missing yesterday afternoons nap worked well for him! Bill made me a tea and loaded the very full basket of dirty clothes in Ptooties for me. I was alone in the Laundromat with the exception of about 25 houseflies. Geesh! I meant to bring the fly swatter.

I loaded 3 washers and began swatting the pests with the Durham fair pamphlet. Coming out the victor over about 15, I settled down and finished my book. So, James Patterson writes some awesome books. “You’ve Been Warned” is good but not his best work. I did find it captivating enough to finish it but was pretty sure it wasn’t one for Bill. Back home, I initialed it inside the front cover and set it aside for Lynn who also enjoys his books.

The umbrella clothesline was full with only about 6 or 8 clothes pegs leftover. That is the biggest laundry load we’ve had in a long time but that’s okay. We’ve been busy and other than a pair of work shorts, we hadn’t run out of clothes to wear yet. Bill finished cutting the front field and the corral, we read some blogs and then we drove into Keady Market at 9:30. We were happy Kim and Ken joined us.

As soon as we arrived at Keady, we were stunned by how busy the streets were. It was a gorgeous day and not only was the place packed but there were many more vendors out today. We decided to split up and go our separate ways with an hour time slot to meet at the front entrance. Bill had luck right off the bat when 2 booths in he found his sandals for the October Cancun wedding. Then he set off to find his Crocs.

I searched for the wedding, not too hard, just waiting for that perfect dress to convince me that it was the ‘one’. By the time we were meeting Kim and Ken, I had our peameal bacon and 2 dresses. Yes, with Bill’s vocal and visual opinion, we agreed that we found my dress. No pictures of that one though. The other is a striking blue and will be lovely on the beach

We just pulled in the lane when Elvis turned in behind us. He was at the neighbours and wanted to tell us that the farmer was cutting the wheat fields. Our clothes were going to get dusty. Plus, he had a couple of things he wondered if we were interested in. He didn’t stick around and we were all hungry so had some lunch. The clothes were dry and I brought the clothes in from the line.


Bill and Ken moved the half barrels of scrap wood up here to our wood pile. I will transfer it into the black storage box. Then they moved the pails of stone from our car shelter down to the area beside his Hangar. They had a plan and by the end of the day it would be closer to fruition.

Kim and I sat in the shade of their rig and watched the guys before they joined us. When Rob, Pat and Lynn drove up the lane it was the perfect time for Happy Hour. Our last one together for a while.

As usual the laughter and the stories made the time zip by and even after we said our goodbyes to the 3 of them, the 4 of us remained sitting until 6:15. Before they left, we all went down to upright and move the shelter framing. Then woops! Supper time!

It was a late meal for us since I did pork ribs in Madame IP. By the time dishes were done, after a wonderful feast with Caesar salad, Bill wasn’t out to light the campfire until after 8. 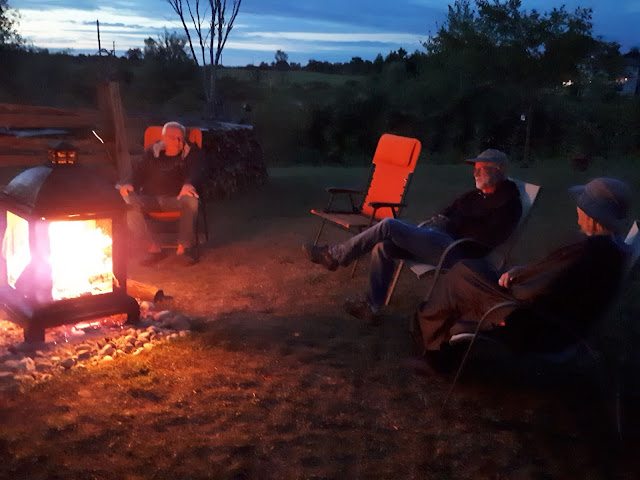 Ken and Kim joined us and we enjoyed one more last evening together. There would be no rush for them in the morning which is nice that they can take their time. Another great day for the books and blogs. I hope you had a wonderful one as well on this glorious summer day.


Thank you for your visit too!

Posted by Patsy Irene (Chillin' with Patsy) at 7:43 AM