The Ridge
On Monday, Aug. 19th I was so happy to wake up from the frustrating dream that I was having. It wasn’t a nightmare and although my family would never act this way in real life, opening my eyes and getting up was the best relief! Everyone was depending on me to cook bacon and eggs on a new-fangled stove with no help. It was just stupid which makes me wonder why it had me off my A game upon wake-up.

When I did look at the clock, it was 7:05 so we’d slept in again. I had no excuse since I was in bed last night at 9:30 AND out light like a light! We got up and greeted this beautiful looking morning. I should have walked but the ‘fog’ of the dream lingered and I was in no mood. A nice walk probably would have helped a lot!

Before doing anything else, we needed to get the garbage and recycle bins down to the end of the lane. We bagged the last of the garbage and pulled the bins out. Bill loaded them on the tonneau cover of B.B. and drove them down. Lately, the truck has come through by 7:30 and sure enough, within 20 minutes, they came through. Phew!

Then, to make matters worse, I went on to record our data usage from the previous day (as we always do). For the second time this month, my usage was off the charts, putting us in limited territory for the remainder of August. This happened on August 4th/5th as well jumping 5 gb on MY usage alone. We believe that it is another quirk in the system since I don’t do anything different on a daily basis.

We had one instance like this in March, on our way home. Rob and Pat experienced a similar burp that later corrected itself for both of us. I can only hope that is the case here but today, we’re going to test it by me not being online except to post my blog tonight. I know that if we get really stuck in the last few days that the library is close and so is our buddies’ house. 😊 They have unlimited and have offered it in a pinch.


I finished my tea and then dressed to work outside. Catching the early part of the day, I was outside by 8:30 with the weed trimmer. I even got it started on my own this time, which doesn’t often happen. The weeds on the Corral hill were very tall, mostly Queen Anne’s Lace, and I wanted to skim over the top where I’ve planted ground cover. I was surprised to see that some periwinkle is actually taking hold plus the last plants that Gayle gave me. Their name has escaped me right now.

When I finished the corral and the outside trimming along the fence, I was relieved yet hot, sweaty and famished. I sat with a water on the patio and watched Bill as he finished his morning job. He was painting areas around the Suite, the jack pads, the hitch, the propane tank tray and the steps. Everything needed a touch up and now looks great!

We came inside and had eggs and peameal bacon. Once the dishes were cleaned up, I made myself a bp coffee and Bill got washed up for the day. My shower yesterday had me nice and clean but after the weed trimming, my feet needed another wash. 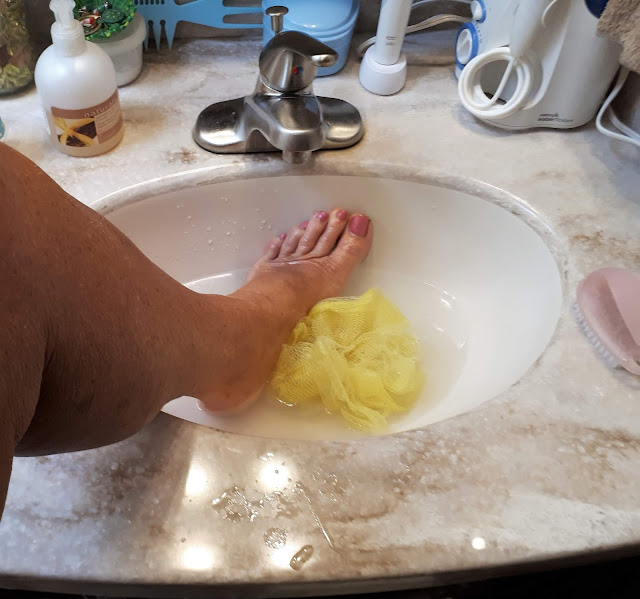 A foot bath was necessary

I wasn’t up for another shower so I showed some flexibility and did them in the bathroom sink. LOL We don’t wear socks in the summer unless absolutely necessary so with just my Crocs on, my soles were a disaster.

Then I drove into Durham to pick up a couple of birthday cards. I really dropped the ball this month with 3 siblings celebrating. The first two would be late and that just isn’t like me. Speaking of birthdays, my little brother, Michael, out in Cold Lake, Alberta turns 53. 53!! How is that possible? Oh yeah, I guess I’m up there too!

We tease Michael that he was an ‘oops’ in Mom and Daddy’s family planning. He arrived 12 years after me but what a cute little oops he was. As blonde as blonde could be with blue eyes (am I embarrassing you, Michael?) he was a little gift for all of us. Oh, and not spoiled at all!! 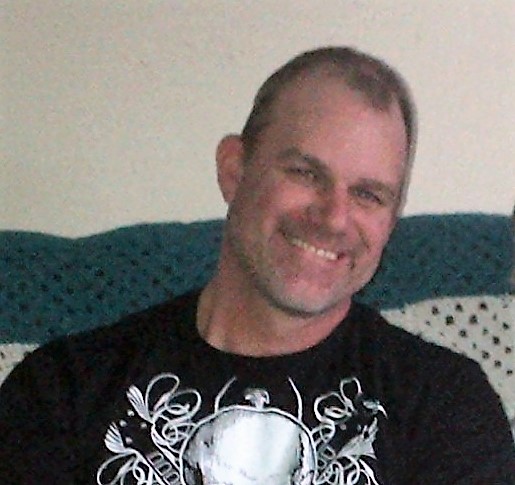 When I returned home, I got lazy and did nothing but read my book. I’m close to the finish, well within 15 chapters, but when it is a great book that is close to the finish. I took my chair down and sat near the Hangar and the cargo trailer while Bill finished putting some touches in the trailer for his Telemaster. I wanted to be outside so why not within talking distance?

We both came up around 2:30 and had a snack of some fat bombs and cheese. Plus we each had a chilled glass of soda in our recliners. I’m not sure I dropped off like Bill did but in between chapters, I know that I relaxed my eyes a couple of times. At 5:45 my book was done so I got to work making supper. Not much was planned but I had thawed a pack of ground beef.

With a few small potatoes, onions, broccoli, mixed veggies and the beef gravy we had a good supper. I added the last of the canned tomatoes to mine, mostly to clean them up. We did dishes and the rest of the evening was spent watching some tv. Then I finished my blog post for today, waiting until 8:30 to post so we can keep an eye on our data usage. Every 4 hours it updates.

This has been a good day and I’m happy to get that weeding done on the hill. It looks 100% better if I do say so myself.