The Ridge
Bill and I woke up together on Monday, Aug. 5th, the Civic holiday here in Ontario. It was only 5:30 so we dropped off to sleep again and lounged with the contentment knowing we had nowhere to be today. Around 7:30 we pushed ourselves to get up and greet the day. The sky looked gorgeous as I donned my jacket and vest to go for my walk. My legs have almost forgotten the route!

The temperature was around 61F/16C and there was a slight breeze. It was perfect and yet I knew that it would be increasing in temperature soon.

When I got back, my jacket was off and I texted Bill in the Hangar that Donna and the guys were awake at the Acreage. He wanted to get a bladder full of water to wash the Suite roof. I’d love it if there was some leftover for the garden. Inside, I made my tea and when Bill returned with the water, I made him eggs and bacon.

Out and up, he went and began cleaning while I remained inside and cut up the 6 or 7 apples from the fridge. If I don’t do something with them soon, they’ll go bad. I buy them with good intentions but then I never seem to eat them.

I found a recipe for Apple Crisp in the Instant Pot so thought I’d give it a try. It isn’t a keto recipe (although there were plenty) but I did substitute the flour with almond and some of the sugar with Splenda. I’m waiting to plug in before cooking it, of course.

I made myself a B.P. coffee and cleaned up the dishes before getting dressed in outside clothes for working. When we’d visited Kepple Croft Gardens, Dawn gave us 6 or 8 baby oak trees to plant. This morning when Bill came back from the Acreage, he brought me 2 for us to plant up here on the Ridge. We love the oak tree, stately, tall and majestic. Our only experience with one though was at our home in London. It was really, really tall and unfortunately in a bad location.

So, I found a couple of pots that would work although one was almost too big. I decided to transplant our red maple into the biggest pot and use the smallest ones for the oak trees. Good thing I still had some bags of black earth, this ground just isn’t conducive for digging up good dirt.

Once I finished potting the 3 trees, I filled the watering can and watered the plants around the area. After one trip up to my vegetable garden, Bill said he had water left in the bladder so that was a big help.

I hoed while up there and cleared out the few weeds that grow faster than anything. Woohoo! Another baby watermelon. I took Carol’s advice and covered the plant with a plastic bag to keep the heat in. Hopefully, it will still get enough sun through the semi-transparent plastic. I’m excited about the growth and I’m hoping the Miracle Gro works wonders over the next month or two. Then I stopped. I put things away and washed up.

Inside, my apple crisp was in lingo still but the apples were coated in the spices, sugars and water so they were fine waiting. Bill came in around 2ish and had a yogourt, just as I was having a clementine, some walnuts, cheese and my own yogourt. Good timing. We/I decided that it wasn’t the day to start laying some more of the groundscaping material with mulch. Just too hot and we’d already both been out in it enough. Tomorrow early we can get at it.

Bill went up for a nap and I took my book outside to read for a bit. Haven’t opened that book for a week! Just too much other good stuff going on. I decided to stretch out on my lounge chair in the sun for an hour and it was quite lovely. There was a nice breeze and so peaceful. Bill was up around 3 from the Hangar for a cold drink and after that I moved into the cooler space in the Bunky.
I set my small fan on the table and pulled out a 500 pc. puzzle. Time to test my She-shed out. 😊 It was nice in there with the windows open and the fan circulating the breeze. I don’t have a big table so need to be very particular on the size of the puzzles I assemble. The nice thing is that I can work on them whenever I want without them taking up any space in the Suite. On the road, I will still use my puzzle mat that Deb D. gave me.
After plugging us in to power, I came inside to start supper. We had 3 Tilapia loins in the freezer so I put them in water in the sink to thaw them quickly. Then I finished with the apple crisp. Once Madame IP came up to pressure, it took 1 minute (ONE) to cook the apples. 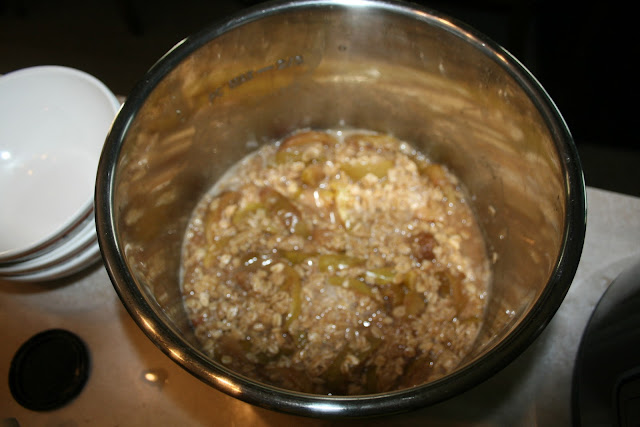 I turned it off, hit quick release and then added the crumble on top. Sautéing for 2 minutes was all that was necessary. I removed the pot and dished the crisp out into 4 dishes. It smells and looks wonderful!

We had the fish, fried inside and with a salad on the side, it was a delicious meal. After dishes Bill went down you know where and I watched Die Hard with Bruce Willis. Very action packed and it has been a while since I’ve seen the first one. This has been a great day, nice and relaxing. I hope you had a good one too.

Thank you for taking the time to see what we’re up to.

Posted by Patsy Irene (Chillin' with Patsy) at 7:41 PM