The Ridge
On Friday, Aug. 2nd I woke up at 6:30 and knew right away that I had a marvelous sleep! I think I needed that to catch up on the late nights. It was a start anyway. I have been lazy as far as getting my morning walks in but other than walking back and forth on the laneway (the highway is too busy) I really had no choice. No worries, I’m enjoying myself!

We knew today was departure day and no time restrictions, so we just took our time getting our morning drinks and settling in the sitting room. I downloaded more pictures and we all did our own thing until 8:30 when we assembled with our yoga mats down on the deck. Donna offered us one more class if we were interested. There was a chill in the air but we soon warmed up and chased the goosebumps away with our movements.

The blue jays accompanied us as we stretched into the cow, the angry cat, downward dog, the pigeon and king pigeon poses. I’m not much for yoga and would never pay for a class unless it was with my sisters. That is why these free ones from Donna are great! 😊 Some people LOVE yoga; I’m not one of them but I don’t snub an opportunity to take part. We should have gotten in the hot tub after but we didn’t.

I finished packing up my stuff and the others prepared their brunch. They were eating when I’d finished loading Ptooties and went in to say goodbye. I had not planned on eating as Bill and I were expecting his 3rd daughter for lunch. This was another wonderful Ladyfest. We are sure good at this stuff, still able to find new and interesting things to do. I have a taste for pottery now!

I left for home around 9:30 and got things out for a barbecue. Krystal and Matt have been together, to my knowledge, coming up on a year maybe? I should have asked but never-the-less, we are thrilled she has found someone. It only took 15 seconds to decide about Matt. First star was that he was driving and it was his own vehicle, not hers. Then I saw that he isn’t shy of smiling, or hugging! (my preferred greeting) and the stars just piled up after that.

He is a wonderful young man and Krystal looks very content. We are thrilled that now she will have partner for our vacation in Cancun this October. At 11:30 Bill began grilling burgers and a couple of sausage so there was a choice and after loading them up, we ate outside on the patio in the shade. These were Leadbetters Cowboy burgers and they were thick, juicy and delicious! Krystal brought a keto salad 😊 with broccoli, cauliflower, bacon and cheddar and it was a nice side on our plates.

Then she handed me a package of butter tarts to share, so we fell off the wagon a bit. Yummy! We walked around a bit and showed them the Bunky, the Hangar and Bill answered Matt’s questions about his planes and the property etc. Of course, I got a nice picture of the new couple and they pulled out before 2. Collingwood seems to be the draw this summer as they also were going there for a day trip. It was great to finally meet Matt and see Krystal again. 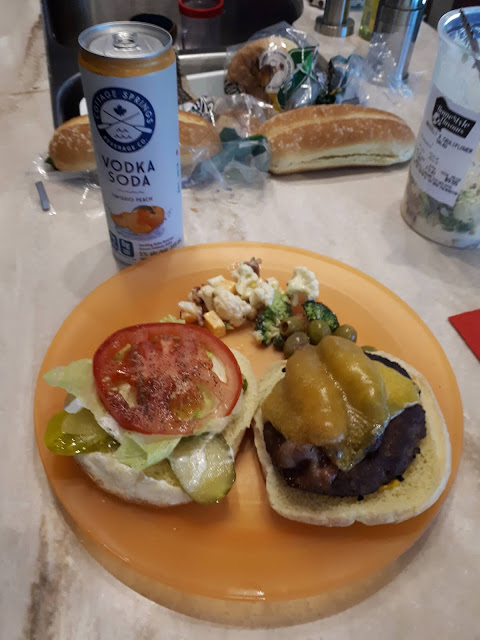 The nice thing is that tomorrow we’ll see them again at a family gathering. After putting the food away and cleaning up dishes, we stretched out on the recliners. Exhaustion hit and we snoozed for about 30 minutes. It didn’t take long to drop off, I’ll tell you that. Then I went upstairs and emptied my suitcase and extra items. Bill went down to the Hangar.

I debated driving over to the Acreage for a swim with Donna, Audrey and Gayle but instead I stayed put and focused on my blog. I took the most pictures of all of us together so put emails together to send pictures to my sisters. I can’t wait for my camera to arrive in London so I’m not using my phone all the time. I had taken my big Canon but didn’t cart it around anywhere, the phone was easier.

The remainder of the afternoon was a big bunch of laziness. It felt good not to have anything on our plate and after the big lunch we didn’t feel hungry until closer to 7 when we warmed up fridge leftovers. I had quesadilla and some corn on the cob and Bill had a sausage on a bun. The only Chapman’s ice cream that Foodland had last Sunday was Strawberry Shortcake which didn’t sound overly appealing but I bought one anyway just to have some. It was quite good and I had some in a cone.

After watching a few episodes of Live PD and First Responders, I was ready for bed. It has been a great week and yet I’m still very glad to be home with my sweetie, in our own bed and falling into a familiar routine.

Posted by Patsy Irene (Chillin' with Patsy) at 5:34 AM