Today, Saturday, Mar. 10th we were up within 10 minutes of each other. After a restless sleep on Thursday night, for some reason, I slept really well last night.

It was 7:10 when I woke. What a great looking morning! The sun has full control of the blue sky yet I felt no encouragement to get out and walk. I think that was simply because today is a rest day for us and I have all day to take jaunts around the area if and when I choose.
We had our tea and coffee together and caught up on blog reading while having a half grapefruit each. The temperature was hovering around 46F and quickly rose to 64F by 9:30. We both got cleaned up, put our shorts on, took our walking sticks and hopped in Black Beauty. We wanted to tour the park a bit and check out the ‘Bottomless’ lakes here. Interesting story of where the famed name came from.

Leaving the Lea Lakes Rec Area where we are camped we pulled into the Lower Ridge primitive camp area and parked. There were quite a few lakes named on the placard so we read that first and then started walking. The first one is called The Inkwell, aptly named because it is encircled by a craggy red rock wall and seems to drop right down into a well. Standing there on the edge, looking down about 20 feet, we could see fish taunting the visitors.

We hiked up over the ridge where we had an awesome view of Devil's Inkwell Lake and around the base, down to the beach of Pasture Lake. This lake was about the side of the pond back home at The Ridge, minus all the weedy growth.

There is no swimming or fishing in these lakes but a couple of them looked like they would be great places to kayak. Next was Figure Eight Lake , two lakes not joined but close together and in the shape of an 8. 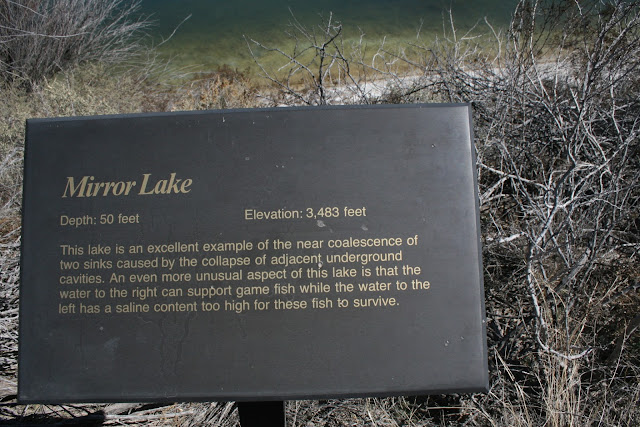 Walking a bit further, we stopped at Mirror Lake where from our vantage point, we could see a young family, Mom, Dad, child and 2 dogs on the sandy beach. This lake, again aptly named, was two bodies of water joined by a shallow strip. When they left, we walked over and down the steep rocky steps to the beach.


The lake on the right is the only side suitable for fish The left side has too much saline for them to survive. We had to take some photos to prove we were there.


We drove further down and parked near the Visitor Centre. Hiking back on the trail we walked to the edge of the last one we would see here. This one was called Cottonwood Lake and it was very cool to stand on a rocky cliff looking down. There were quite a few Prickly Pear Cactus growing up the sides of the ridge. 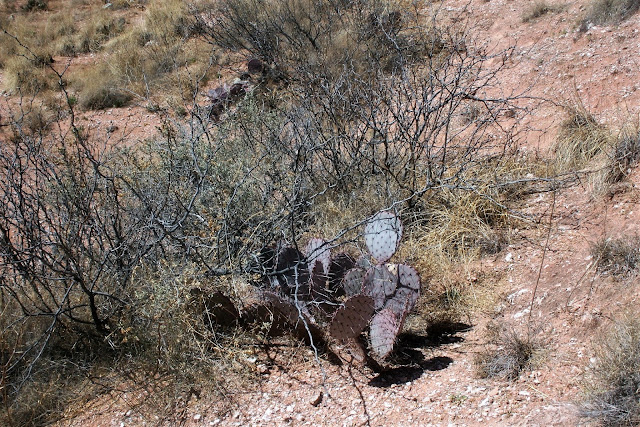 I offered to take a picture of a young couple on the edge, if they promised not to fall in, and they in turn did the same for us. She called it team work!

Off they went and we began chatting with another lady there with her dog, Lucky. We walked back together and she told us of how she and her husband bought an old 1980 Casita trailer two weeks ago.

They only do day or weekend trips and have a few things to fix up inside although she seemed to love its dated decor. Sandra and Bill (!) were a nice couple and gave us (‘such nice people’) lots of encouragement to come back again to their country. They had a lot to share of places to see in the area, living in Roswell now, where his home roots are. Wishing each other safe journey, we hopped in the truck to head back. 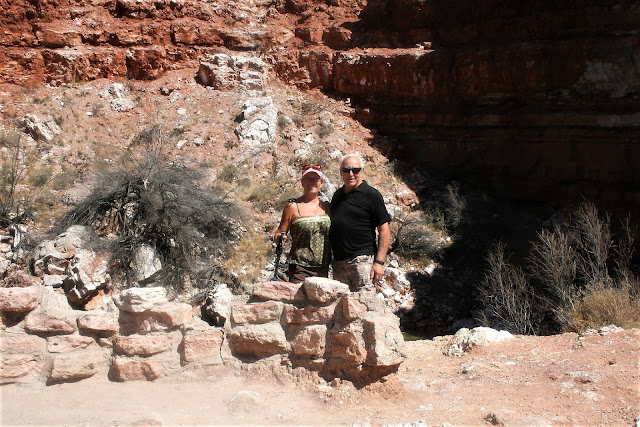 The day was certainly a hot one, reaching 81F in the heat of the sun. We were thankful for the wind today or it would have been ridiculously hot. Earlier this morning, a strong gust of wind blew our Weber Q off the picnic table. We didn’t see it until later as Black Beauty blocks the view for the most part. Weber is fine although one of the side trays broke. We don’t always use both trays but Bill is going to try a repair job anyway.

We sat inside and discussed tomorrow’s travel day and how far we plan to go. Well, Jello aside, we know of a few destinations where we can stop but hope to go further than Amarillo, Texas if possible. We will be entering a new time zone tomorrow after setting our clocks ahead tonight for Daylight Saving Time. Destination tomorrow is up to my driver and I totally trust Bill’s mindset. He knows when he needs a break and I know when I need one.
We moved outside and Bill packed Broken-Wing Weber away and once we moved inside, our chairs etc. Supper tonight is mini sausages and mac and cheese with a veggie on the side.
It would be nice if we could get our butts up early and on the road. We’ll have to tell Clemson “no sleeping in!”. This has been a great day. I’m enjoying my J.A. Jance book already and Bill will be looking for a new one to read tonight. He finished David Baldacci’s ‘The Winner’ last night at midnight or thereabouts.

I hope you’ve had fun today too. Thank you for taking the time to stop by and see what gabby had to say. I’d love to hear from you if you so choose to leave a comment.