I was awake on Saturday, Mar. 3rd a couple of times before slipping out of bed at 6:30. It seems to be lighter earlier and I love that. It encourages me to get moving. It is going to be disappointing once we reach Daylight Savings Time on the 11th when it will be darker in the mornings again. I dressed, opened the shades downstairs, set the Keurig and cups on ‘standby’ and went for a walk. 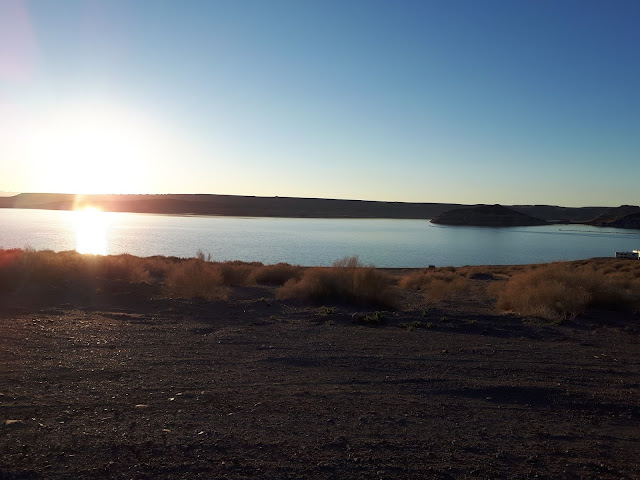 Today I took my walking stick because I planned a further route and not sure exactly what I would be walking on. I headed to the beach first where I saw this Class C motor home parked right at the end of the road.

They must have arrived late and didn’t trust going any further. Good thing, neither side of the road is suitable for wheeled vehicles unless you are in a 4 wheeler.

I slipped around their unit where they were probably still in full slumber and past the Boler trailer before finding the roadway up to the south. I had no idea how far this would be, hence the walking stick. It was a nice leisurely walk and a hard-packed gravel/sand road. It was breathtaking, looking out at the lake from a different angle. 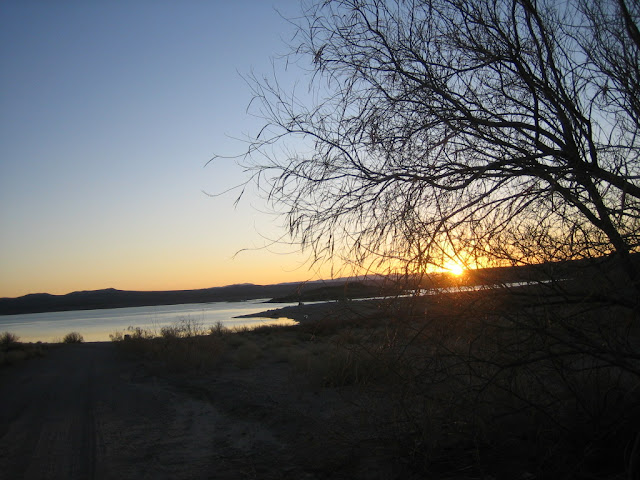 It brought me up to one of the main paved park roads so I kept going until I found another exit off to the north which would direct me home. This is a very nice easy walk and now that I know the route, will take it again. As I was just about back to the Suite, I noticed yellow balls or stones (?) off to my left. What the?  So, I stepped off the road and made my way over to where there were quite a few. There were probably over 100 in different areas in the sandy terrain.


I’m thinking maybe someone dumped a bunch of grapefruit for the animals. Nope, as I got close enough, I could see that they are gourds! I don’t understand that at all but I did notice a few had been cracked open so maybe animals can get into them and eat the seeds. But where do they come from? Strange things that make you go ‘hmm’. Needless to say, I picked up a nice bright yellow full one and a pale one that was hollow.

Back home, my boys were still sleeping so I opened up the chair and sat and rested outside for a while. Looking out at the lake, listening to the quail and mourning doves I could think of no more peaceful place. Oh yes! The Ridge! At least when we go back to our homeland, we have something to look forward to. For however long we’ll be there, it will give me pleasure to return.


When Bill got up he made his coffee and we both sat outside for half hour before Clemson made his appearance. We chatted briefly with our ‘truck camper’ neighbor from Wisconsin. They have been living in that small unit with Bruno, the shepherd, for two months and she is anxious to go home to the cold weather. I guess I can understand that, crawling in and out of that cramped space? We would be lucky to make 2 weeks!
We eventually moved inside and I dished up a bit of pineapple, instead of grapefruit today, and baked a batch of Cinnamon buns. They aren’t Pillsbury but just as good and less money. Once in a while we have something out of the ordinary and today was the day. They were good and after dishes, we all went for a nice long walk to the beach and back. Clemson wanted nothing to do with the water today, once bitten twice shy. 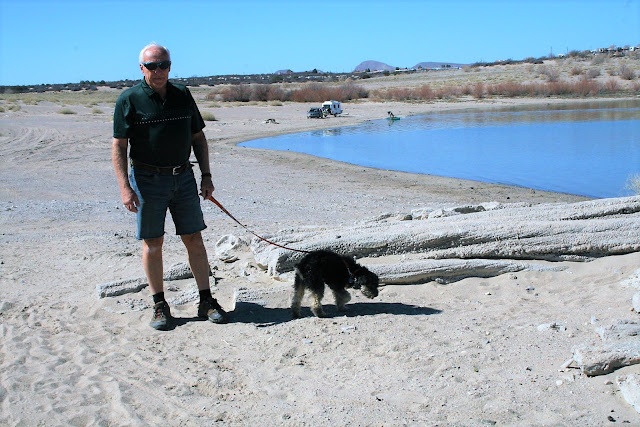 Back home, we sat outside again for a while. My book really has me hooked so I’m very happy for a couple of lazy days. Bill was out taking some pictures and I was following the sun again. The wind, which was almost non-existent this morning had picked up and the gusts were enough to rock the Suite on occasion. I’m glad we are where we are rather than out in the desert with sand blowing around. Been there, done that. 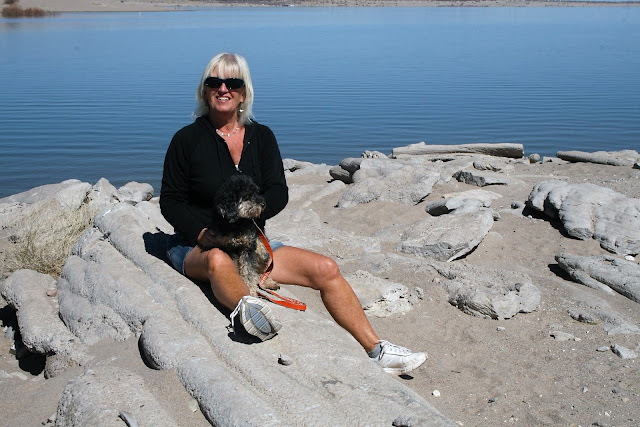 I moved inside for a while after feeling the sleepys taking over but after stretching out on the couch for an hour, it was time to get back outside. I think I dozed for 15 minutes and read my book the rest of the time. The sun was still warm but I had moved my chair as far as I could without going over the railing! We were having a wonderful relaxing day so I came inside and caught up on this post and soon enough it was time to start supper. 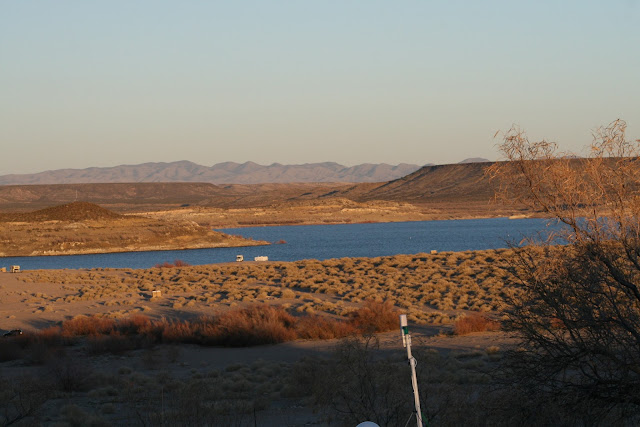 Bill had to move the Weber Q to a different spot on the picnic table to get it out of the wind as much as possible. We grilled a pork chop and a chicken breast tonight. Bill prepared a large potato for grilling as well and I steamed broccoli and nuked mixed veggies inside. The air was cooling down enough that I had to put long pants on and my light hoody. Then I went out with Bill to take some pictures of the quail over the railing.
During the cooking, Bill noticed a couple on Level C (below us) with what looked like a brand-new Montana. They seemed to be having some difficulty with a few things. He put me in charge of the Weber for a few minutes and went down to lend a hand. They welcomed his offer of assistance and introduced themselves. They are only staying for one night but admitted to just driving it off the lot, never having owned a fifth wheel before. Well, Bill is there man if they need help.

Supper was good although the chicken breast was too much for me to eat. What I couldn’t eat went into a baggie in the fridge for another night. I was so close to having my quota of 8,000 steps today so after dishes, I took a 400-step walk. It was getting dark quickly so I returned within 10 minutes. We’ve had another nice day. A day with nothing on the agenda. I hope you’ve had a great day wherever you are. 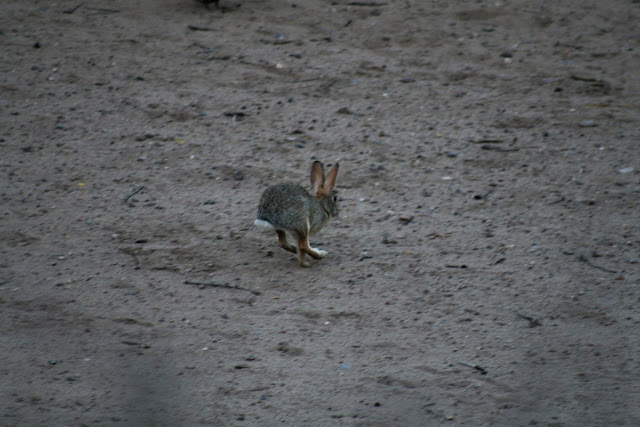 Thank you for taking the time to read my post today. I’d love t hear from you.

Posted by Patsy Irene (Chillin' with Patsy) at 8:02 PM